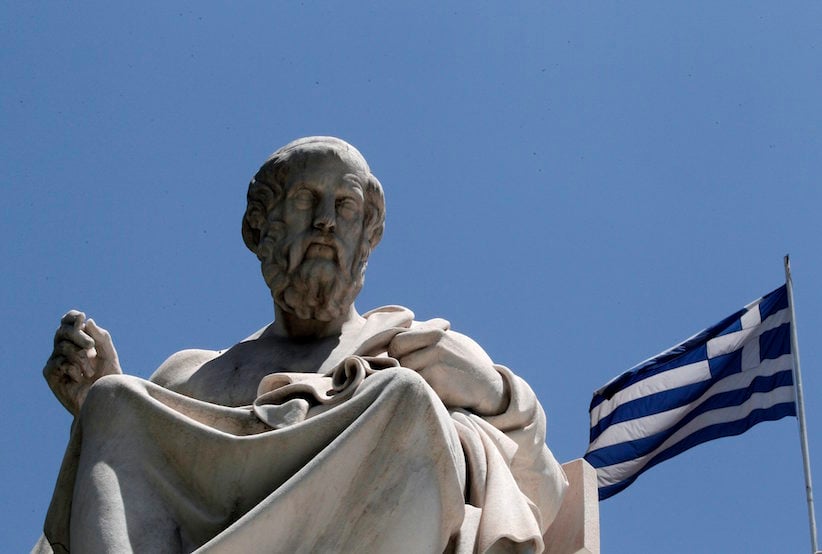 The marble statue of the ancient Greek philosopher Plato stands in front of the Athens Academy, as the Greek flag flies in Athens on Tuesday June 5, 2012. (AP Photo/Dimitri Messinis)

The ancient Greek philosopher Plato, if memory serves from my university days as a student of journalism and philosophy—or as I sometimes call it, gaining a degree in dinner parties—is perhaps best known for his thinking about plates of the tectonic variety.

Well, that’s not exactly right, even if that was a helpful mnemonic device for exams from yesteryear. Plato’s allegory of the cave, from an imagined dialogue in The Republic, isn’t a lesson in geology; it’s a metaphor for seeing past falsehoods and efforts to free the mind and find a higher truth. In an argument between the character Socrates and a friend, Plato imagines an underground cave, where men who have been imprisoned all their life stare at a wall where the shadows of puppets dance against the light of a fire behind them. For these men, those puppets are the only reality they know. But one man is freed and, now able to look, has his eyes scalded by the shadow-casting fire, is stunned by the new realities, and then scrambles out of the cave until he reaches the ultimate reality: a sun that was impossible to fathom when he was seated peaceably facing a cave wall. This freed man is the philosopher, Plato posits: the man who awakens and then burns to find the truth.

That’s an image worth considering amid the outrage generated by a news story from England that has rankled many all around the world—especially on the political right—and re-energized those railing against the reliable bogeyman of rising political correctness. Earlier this week, the Telegraph reported that the student union of University of London’s school of Oriental and African studies college demanded that philosophers like Plato, René Descartes and Immanuel Kant be “removed from the syllabus because they are white” in a mandate that sought to “decolonize” the SOAS.

How infuriating! Kids these days—the easiest three-word phrase to rail against—how dare they ask for the outright banning of these sacred cows of Western thought? Let us mock them for being so triggered! Political correctness has gone too far! Sad!

These wouldn’t be unreasonable responses, perhaps, if the story were premised in truth.

An even cursory look at the cited document from the SOAS student union shows that they only sought to “make sure that the majority of the philosophers on our courses are from the Global South or [its] diaspora,” which hardly counts as a hardline ban of anyone of any race. And while they added that the caveat that “if white philosophers are required … teach their work from a critical standpoint, for example, acknowledging the colonial context in which so called ‘Enlightenment’ philosophers wrote within,” it’s important to note that no philosopher—Kant, Descartes, Plato, or anyone else—is named even once.

It can only be presumed that the Telegraph inserted those names as philosophers they felt fit that description—white, and from the 18th century Enlightenment period—and as thinkers whose potential removal would shake the outrage tree until it bore fruit. (Maybe no one told the writer that Plato, a Greek man who died in 348 BCE, does not quite fit the definition of “white philosophers from the Enlightenment period.”) Let us also acknowledge that criticizing a school devoted to Asian and African studies for wanting to learn more from Asian and African thinkers is a little bit like criticizing math school students for demanding to know more about that Archimedes guy.

The facts haven’t simmered the outrage, nor has it stopped academics from rejecting these efforts to read our time into ancient texts using the talking points of, well, our time. “There is a real danger [that] political correctness is getting out of control,” said Sir Anthony Seldon, vice-chancellor of Buckingham University, because of course he did. “We need to understand the world as it was and not to rewrite history as some might like it to have been.” Or this lay-up of a line, from Sir Roger Scruton, where you can almost hear the haughty sniff at the end of the sentence: “If they think there is a colonial context from which Kant’s Critique of Pure Reason arose, I would like to hear it.” No wonder the story has, in recent days, become catnip for such publications as Breitbart and The Rebel, but also for more mainstream media outlets, like the Independent and the National Post here in Canada. Everyone loves a story that feeds what we already know, even if it’s not rooted in fact.

The whole thing is a missed opportunity: A missed opportunity for academics to give the story little credence and prove that philosophy was above the fray of the overly personal bickering that has infected the political climate. A missed opportunity from reporters to find out from the angriest of these academics why they think that teaching more diverse voices means teaching Western European voices less. (In fact, that’s the kind of defensive mentality—that addition must mean subtraction—that’s awful familiar from the most blinkered responses to the Black Lives Matter movement, or to any urge for equality that touches a frayed nerve.) Hell, it was even an opportunity to simply acknowledge that philosophers owe a lot to non-white thinkers. It would be hard, for instance, to imagine a legacy for Aristotle without the efforts of the Islamic scholar Averroes, whose work then inspired Thomas Aquinas. Plato’s legacy was continued and refined by Plotinus, who was born in Egypt. St. Augustine, best known for his Confessions, was an Algerian; some of Voltaire’s political writings were influenced by what he saw in China. (Or, at least, there was room for a conversation about how projecting race onto ancient times is a sticky wicket in general.)

Even if we were to take the story at its face value—that indeed, philosophy students from the University of London, rather than a specialized school like SOAS, wanted to learn more about philosophers outside of the Western canon and sought a critical take on hoary canonical icons. How is that so wrong? How could students taking an active and expansive interest in what they’re being taught scare teachers, when sparking thoughtful considerations like that is the very goal of education? Wanting to learn more about historical contexts and seeking to think critically and contextually about what they’re studying aren’t signs of a dismissible “snowflake” student. It’s actually the sign of a good one.

But mostly, the whole philosophy fracas is a depressing vision. How sad that academics—the high-minded thinkers who think they have themselves escaped the cave—thought defending philosophy meant parroting easy outrage and succumbing to overly simplistic falsehoods. How tragic that teachers appeared to so quickly abandon their students for the most bargain-bin of straw men. And that may be the saddest thing of all: if falsehoods and polarized politics and manufactured outrage and the leaping to simple fallacies can infect philosophy’s lofty rafters, then what hope do the rest of us have?

After all, if those philosophers had indeed re-read Plato, they would have known better. The characters in the imagined conversations in The Republic are more than mere fools built up to be knocked down. They challenge Socrates’ proofs, urge him on, and make them better. They wield ideas, not personal attacks. They are rhetorical dance partners, not useful idiots. Socrates, the book’s Platonic mouthpiece, even acknowledges that he is willing to be convinced otherwise on various points. Philosophy of the sort in The Republic is, in short, not a project of balkanization, where ideas are heroic or villainous. It’s a dialogue, the kind we need more of, from all of us—but especially our philosophers.