How an America-loving country became a jihadi hub

Kosovo owes its existence to the West. Its capital even has a statue of Bill Clinton. But even here, Islamic State is taking root. 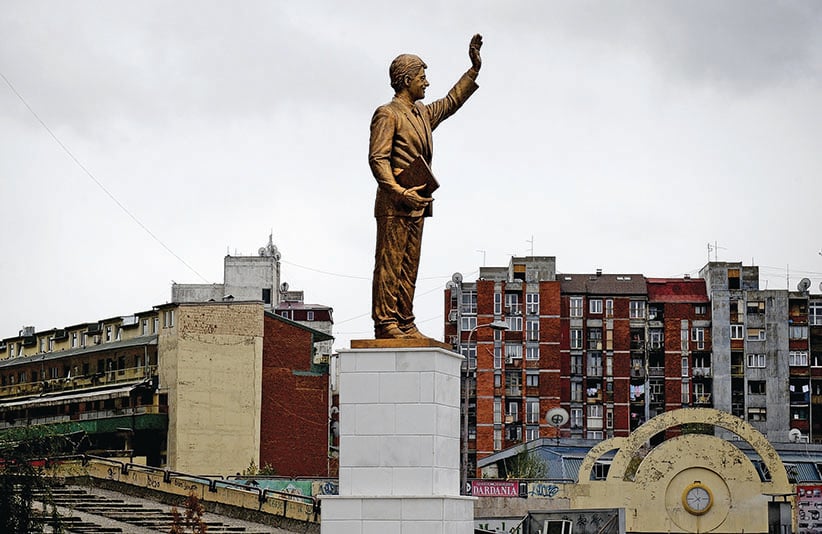 The Western country that has sent the most recruits on a per capita basis to join Islamic State and other militant groups in Syria and Iraq is one that owes its very existence as a state to NATO’s military intervention on its behalf.

An April report by the Kosovo Center for Security Studies (KCSS) reveals that as of January, some 232 Kosovars have joined Islamist militant groups in Syria and Iraq, a rate of 125 recruits for every one million people living in the country. This is well ahead of Bosnia, which comes in second with 85 recruits per million, and of Belgium, the third-ranked country, with 42 recruits per million.

Kosovo declared its independence in 2008 after spending most of the previous decade under a transitional United Nations administration that was established following the 1998-99 war with the Federal Republic of Yugoslavia. That conflict, in which ethnic Albanians in the Kosovo Liberation Army waged a guerilla war against Yugoslav forces and Serb paramilitaries, was won in large part due to NATO air strikes against Yugoslav military positions and infrastructure. It ended with Kosovo effectively separated from the Federal Republic of Yugoslavia.

In gratitude, Kosovars named a major boulevard in their capital, Pristina, after Bill Clinton, the American president during the 1999 war, and decorated it with a three-metre-tall statue of him. They have also named a street after George W. Bush, who was president when America recognized Kosovo’s independence.

According to Shpend Kursani, an external research fellow at KCSS and author of the report, most Kosovars still have a positive view of America and NATO. And yet, he says, the majority of Kosovars fighting in the Middle East have joined Islamic State, a militia whose goals include waging war on the West—raising disturbing questions about Islamic State’s ability to penetrate communities that, being broadly secular and pro-Western, would seem to have little reason to support it.

Islamic State’s recruiting success in Kosovo upsets Kosovars who are not sympathetic to the group, or to their fellow citizens who join it. “There’s a sense that people joining Islamic State are betraying in many ways the very nation,” says Florian Bieber, professor of southeast European studies at the University of Graz.

Related: Arab nations must step up in fight against Islamic State

The per capita numbers don’t tell the whole story. Islamic State and Jabhat al-Nusra, the al-Qaeda affiliate from which it split, are Muslim supremacist outfits. Non-Muslims could never join them. When the percentage of recruits is calculated based exclusively on a country’s Muslim population, Kosovo falls lower in rank. It sends about 130 volunteers per one million Muslims in its population—far below several Western European countries, including Finland, which sends some 1,667 recruits per million Muslims, and Belgium, which sends 690.

By this calculation, Kosovo is similar to Bosnia, another Balkan nation with a large Muslim population, which sends 211 recruits for every one million Muslims living there. But Muslim Kosovars are still much more likely to join jihadist groups than Muslims in Albania and Turkey, both Muslim-majority countries. Turkey, which borders Syria and Iraq and is a major transit point for foreign fighters joining Islamic State, sends only eight recruits per million Muslims, barely six per cent of Kosovo’s rate.

(Canada was not included in the KCSS study, but would rank relatively low on the list of source countries—both on a per capita basis, and as a percentage of its Muslim population. In an interview earlier this year, Amarnath Amarasingam, a post-doctoral researcher at the University of Waterloo, estimated about 60 Canadians were members of Islamic State. Canada’s Muslim population totals a little more than one million.)

That Muslims in Denmark, Austria and France are more likely to join jihadist groups in Syria and Iraq than are Muslims in Kosovo may reflect the alienation felt by Muslims living in western Europe, says Francisco de Borja Lasheras, a policy fellow at the European Council on Foreign Relations’ Madrid Office. Kosovars don’t experience the same sort of cultural isolation that a second-generation Muslim living in western Europe might, he says.

But according to Kursani, the rate of Kosvar recruits is still worrying—in part because Islamist extremism is such a radical departure from the way the faith has traditionally been practised in Kosovo and elsewhere in the Balkans.

Changes began in the wake of the 1999 war, with the influx of charities and other NGOs from Saudi Arabia and elsewhere in the Gulf. These organizations repaired mosques, built schools and printed books. They promoted the austere, Salafist version of Islam that dominates religious discourse in Saudi Arabia. They were especially active in Kosovo’s neglected rural areas, according to research by Isa Blumi, an associate professor at Georgia State University.

Kursani has also traced a number of ethnic Albanians from Kosovo, Macedonia and Albania who studied together in the Middle East during the 2000s and, as he puts it, “started hanging out with the wrong crowd.” Some, in Egypt, became inﬂuenced by “takfiris”—a term referring here to fundamentalist Sunni Muslims who think they have the right to declare other Muslims apostates. It’s a claim also made by leaders of Islamic State. The ethnic Albanians returned to the Balkans. A few began to preach in Macedonia, and one or two did the same in Kosovo, where they had some success spreading the foreign ideology they had acquired.

Kursani says exposure to this extremist version of Islam is a factor contributing to the high numbers of Kosovar recruits to jihadist groups, but it’s not the only one. Most of the society remains broadly secular, he says. But he argues that there has also been an erosion of national identity as a unifying force since the war, and for some young people, religion has filled that gap. This, is turn, creates dislocation within families, Kursani says, as secular parents recoil from the new-found religiosity of their children. Young people then turn away from their parents and find community among supporters of violent Islamism. “The brainwashing process starts, and the brainwashing process is easy, because Kosovo’s poor education system hasn’t equipped youth to think critically,” he says.

Another contributing factor to Kosovo’s fecundity for jihadists may be the poor economic prospects of its young people. Kosovars are leaving their country by the thousands. Most try to get to the European Union, usually crossing into Hungary from Serbia. Others, unemployed, isolated from their families, and lacking a strong sense of communal identity other than religion, look elsewhere.

“Seven years after the declaration of independence, economically things are not moving forward,” says Bieber. “The hopefulness of the first period has been replaced by frustration, and that has pushed some people to seek their fortunes with radical Islamic groups like Islamic State.”

None of these factors is unique to Kosovo. Liberal strains of Islam have elsewhere been challenged by severe and chauvinistic manifestations of the faith. Other countries are poor and have gone through conflict and political upheaval. It’s noteworthy that Bosnia, which like Kosovo has emerged from war but is yet to build a prosperous and well-governed society, is also a rich source of jihadists among European nations.

But in Kosovo, these ingredients are particularly concentrated. The society at large remains pro-Western and resistant to Islamic State’s devotional perversions. But a minority of its population—a large minority compared to other countries in Europe—is succumbing to them.