How Assad's man got a priceless antiquity out of Canada and into Syria - Macleans.ca 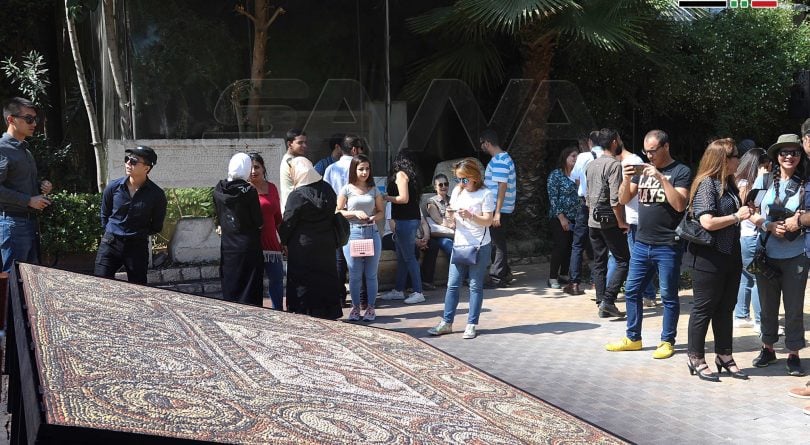 The unveiling of the 1,800-kilogram, late 5th Century Byzantine Christian mosaic at the National Museum on Damascus, as seen on the website of Syria's state news agency. The mosaic had previously been at the Montreal Museum of Fine Arts. (SANA)

Waseem Ramli, the notorious Montreal businessman whose diplomatic status as honorary consul for the blood-drenched Baathist regime in Syria was revoked by Foreign Affairs Minister Chrystia Freeland last month, is being officially heralded in Damascus these days as a selfless and patriotic national hero.

But it’s not because he’d managed to secure diplomatic credentials from Global Affairs Canada this summer, despite being feared and loathed by the Syrian refugee community in Montreal—he’s often seen driving around in a fire-engine-red Humvee with a portrait of Syrian tyrant Bashar al-Assad on a side window. It’s because he pulled off an altogether different and equally dramatic Canadian caper, right under everybody’s noses, in the weeks before the Assad regime appointed him to serve as a diplomat in Canada. And no law was broken.

In broad daylight, Ramli walked out of the Montreal Museum of Fine Arts with a priceless 1,820-kilogram late 5th century Byzantine Christian mosaic. Measuring roughly 3.5 meters by 2.8 meters, the mosaic, originally from the vicinity of Hama on the Orontes River, was unveiled at a glamorous ceremony in Damascus on Monday. At the celebration, Ramli was praised to the skies for having secured the Hama mosaic’s acquisition over the repeated objections of Canadian officials.

READ MORE: Why did the Trudeau government approve Bashar al-Assad’s man in Montreal?

But Canadian officials raised no objections at all to surrendering the Early Christian artwork to the Syrian Arab Republic, Maclean’s has learned. The process that led to the ceremonial unveiling of the Hama mosaic in Damascus on Monday was a lot like the cavalcade of official and inadvertent Global Affairs sign-offs that led to Ramli’s authorization to act as the Syrian regime’s honorary consul in Montreal.

Freeland pulled Ramli’s credentials after she learned from a Sept. 23 report in Maclean’s that her own department’s Office of Protocol had authorized and registered Ramli to act on the Assad regime’s behalf. But it’s too late for the Hama mosaic. It’s now at the Syrian National Museum in Damascus.

The massive mosaic came from a shipment of 82 mosaic fragments that the Syrian regime exported illegally in the late 1990s, likely in connivance with the smugglers themselves. The collection was intercepted by the RCMP and Canada Customs officials, and the artifacts were eventually returned to Syria, except for the Hama mosaic. Although it had been cut into two pieces, apparently for ease in transport, the mosaic was so magnificent that McGill University professor John Fossey, the Montreal museum’s curator of Greek art at the time, managed to arrange a loan of the work for display at the museum.

The loan was extended several times, starting in 2004. Assad plunged Syria into a nightmare of mass death and jihadist mayhem in 2011, and after 500,000 dead and more than six million refugees, he’s been winning. On Dec. 29 last year, Ramli walked into the museum, presented a letter from the Syrian government, and demanded that the museum surrender the Hama mosaic to him.

“When he first came in to us in December, I think he expected that overnight we could just take it down and hand it to him,” Hilliard Goldfarb, senior collections curator and curator of old masters at the Montreal museum, told me. But there were forms to be filled out, and proper authorizations to be obtained. Still, last April, Ramli was on hand at the museum to observe the mosaic being carefully taken down from its display mounting and placed in a special crate.

On May 13, the Hama mosaic was placed on an Air France flight to Paris. From Paris it was shipped to Beirut, and then transferred to the National Museum of Damascus where it was unveiled on Monday at a posh gathering of regime officials and diplomats from the few countries that haven’t severed relations with Assad’s rogue regime. At Monday’s unveiling ceremony, according to coverage by Syria’s state news agency, Mahmoud Hammou, the country’s director general of antiquities and museums, praised Ramli as a Syrian patriot who’d managed to acquire the Hama mosaic and arrange for its return to Damascus “at his own expense,” despite successive objections from Canadian authorities “under the pretext of the war on Syria.”

That’s not even close to what actually happened. Between Dec. 29 and May 13, Ramli’s efforts to get the Hama mosaic back into the hands of the Assad regime were dutifully stickhandled by a variety of helpful and perfectly friendly Canadian officials. “We were in touch with both the Ministry of Foreign Affairs and Cultural Heritage in this matter, and we were told, yes, this work can be returned,” Goldfarb said. “We had contact by phone and by email with various parties. Canada was well aware of what was going on.”

There was a bit of a rigmarole, but Ramli’s demands were all met within six months.

“I’m not a politician. I’m an art historian. I don’t for a minute want to be seen as defending the Syrian regime, which I find absolutely horrible, but that’s not the issue we were handling,” Goldfarb said. “We were fully in touch with all the authorities. Really, to my mind, we didn’t have much choice.”

And that’s because Global Affairs Canada didn’t give the museum a choice. Nobody said no. Nobody even said, hold on, maybe we should just say no, this belongs to the Syrian people, not to the criminal regime in Damascus. So Goldfarb and his colleagues had little option but to comply with Ramli’s demands and hand over the Hama mosaic.
“Global Affairs Canada had no role in facilitating its return,” Adam Austen, speaking for Foreign Affairs Minister Chrystia Freeland, told me.

This is, arguably, not untrue. The Cultural Property Export and Import Act requires that property lent to Canadian institutions be returned as the loan contract stipulates, and export permits to return loaned property are automatically approved. Ordinarily, ministerial discretion doesn’t enter into it.

But Syria is no ordinary country.

The reopening of the National Museum of Damascus last year has afforded the Baathist regime several propaganda opportunities in its push to rehabilitate its global reputation and persuade the international community that Assad has won the scorched-earth war he has been waging on the Syrian people. Last Monday’s unveiling of the Hama mosaic at the National Museum was a propaganda victory for the regime. And quite a few Canadian officials, at the highest level, either signed off on the file or just let the transfer proceed without objection.

That is how Ramli ended up registered by Global Affairs Canada as an officially authorized diplomat, too. A Liberal Party donor and proprietor of the Cocktail Hawaii restaurant on Rue Maisonneuve, Ramli calls the heroic first responders of Syria’s White Helmets organization “terrorists” and al-Qaeda operatives. This was a bit much for Freeland, because last year, she led an international rescue operation that brought about 250 White Helmets and their families to settle as refugees in Canada.

Ramli obtained his honorary-consul credentials from Ottawa in August after travelling to Damascus in June, where he obtained his diplomatic appointment from the Assad regime only days after posing for photographs with Justin Trudeau at a Liberal Party fundraiser. He was all set to open a consular office in Montreal on Oct. 1, and he would have been the most senior Baathist official in North America, if Freeland hadn’t furiously intervened and revoked his credentials.

Ramli would have ended up with consular-services power over tens of thousands of Syrian immigrants and refugees across Eastern Canada and throughout much of the United States. That’s because Syrian diplomats were expelled from North America in 2012 in response to Assad’s crimes against humanity, and since then, honorary consulates have operated only in Vancouver and Montreal, and only intermittently. All requests for birth certificates, diplomas, remittance arrangments and so on would have had to run through Ramli.

Canada and the U.S. are among dozens of countries that have cut diplomatic ties with the Assad regime. Suspended from the Arab League in 2011 and the Organization of Islamic Cooperation in 2012, Syria is a pariah state, subjected to United Nations sanctions, European Union sanctions, and U.S. and Canadian sanctions. But in dealing with the Assad regime’s application for diplomatic credentials on Ramli’s behalf, the “vetting” process fell apart. Everybody did their jobs, but nobody noticed the Office of Protocol standards stipulating that honorary consuls should be individuals of standing in the community, and shouldn’t be politically active. Syria was treated as though it were a normal country, like Costa Rica, or South Korea.

And in the matter of Ramli’s determination to retrieve the Hama mosaic on the Assad regime’s behalf, the Cultural Property Export and Import Act was followed as though Syria was France, or India, or Ireland.

Since 2011, when Assad first put the torch to his country, Syria’s cultural patrimony has been looted and traded on the black market by ISIS, pro-democracy rebels, and by the regime itself. The collection of artifacts containing the Hama mosaic had been spirited out of Syria in 1996, apparently by individuals close to the dictatorship of Bashar Assad’s father, Hafez Assad.

After he showed up out of the blue last Dec. 29 at the Montreal Museum of Fine Arts demanding the mosaic’s return, Ramli was politely received, and advised of the proper documentation he’d need to provide. Despite the Assad regime’s claim that the Canadian authorities had refused to return the mosaic “despite successive official demands,” Ramli was treated with every courtesy.

In January, Ramli returned to the museum with a letter from the Syria’s Ministry of Culture. On Feb. 4, Bashar Jaafari, the permanent representative of the Syrian Arab Republic at the United Nations, passed along Ramli’s power-of-attorney documents to Marc-André Blanchard, the former McCarthy-Tetrault chief executive officer and president of the Quebec Liberal Party that Trudeau had appointed Canada’s head of mission at the UN.

Blanchard handed it up, and on Feb. 12, Freeland’s office was formally advised of the proceedings. Andrew Leslie, the retired general and Orleans MP who served as Freeland’s parliamentary secretary, was brought into the loop in March. Rory Raudsepp-Hearne, Global Affairs’ team lead for Syria and Lebanon, signed off on it. So did senior cultural affairs officials with the Department of Canadian Heritage.

No sanctions lines were crossed because no money changed hands, and Canada’s custody of the mosaic ended in Lebanon. In Beirut. The Canadian embassy there formally handed custody off to Syrian officials for transport to Damascus.

The Hama mosaic is a thing of great beauty. It was excavated from the floor of a church or a convent that was built in the days before the arrival of the conquerer Abu Ubaidah ibn al-Jarrah, when Hama was known in Byzantium as Emathoùs. It is adorned with Christian iconography—the tree of life, a chalice, sheep, fish and birds.

There’s little left of the beauty of Hama. In 1982, Bashar’s father, Hafez, laid siege to the city to quell a rebellion. The Syrian Human Rights Committee reckons 40,000 people died in the slaughter. Since 2011, when Bashar took up his father’s penchant for atrocity, Hama has been bombed, its people massacred over and over and over again.

As for the Hama mosaic: “Everything was done by the book,” a senior official close to Freeland explained to me. “Thank you for bringing this to our attention. This kind of situation repeating itself is highly unlikely.”