How cheap oil could bring down the Saudi royal family 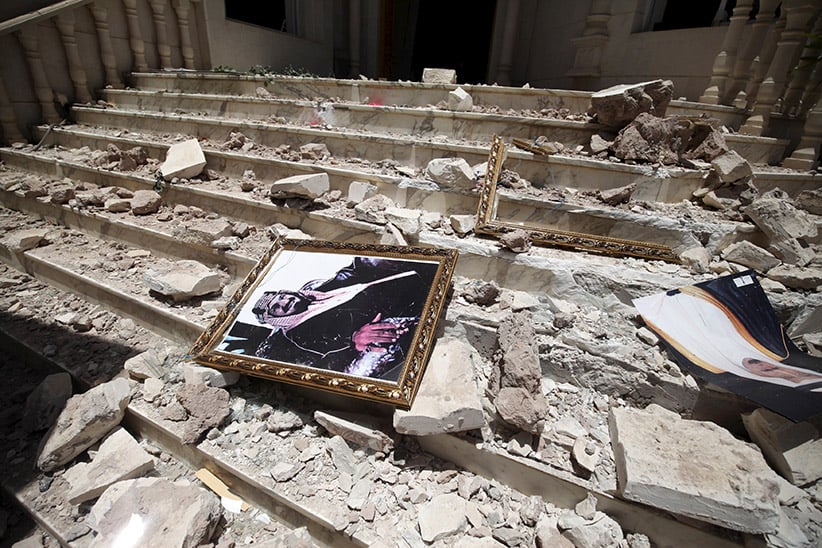 A picture of Saudia Arabia’s King Salman bin Abdulaziz lies amidst debris at the damaged entrance to the headquarters of the Saudi Cultural Center in Sanaa, caused by an April 20 air strike that hit a nearby army weapons depot, in Sanaa April 21, 2015. (Mohamed Al-Sayaghi/Reuters)

The execution of Sheik Nimr al-Nimr and 46 other people in Saudi Arabia’s capital of Riyadh last month was a curious bit of cruelty, even by Saudi standards. Nimr, a political activist and leading figure in the Shia reformist community, opposed the Iranian regime and considered the Assads in Syria “oppressors,” sentiments shared by the Saudi government.

His killing seemed to serve no purpose at a time when regional rivals Saudi Arabia, a Sunni power, and Shia Iran are locked in one of their worst cold-war flare-ups. The fallout was predictable, too: Iranian protesters took to the streets, storming the Saudi embassy and other consulates throughout Iran. Diplomatic relations, already on a knife’s-edge, all but collapsed.

“With the recent execution of Sheik Nimr, it looks like the door to a more cordial diplomatic resolution may have been all but closed by Saudi Arabia,” says Payam Mohseni, Iran project director and a fellow for Iran studies at the Harvard Kennedy School of Government. “The risk is now that tit-for-tat retaliations between the two countries may further raise the stakes and escalate conflict.”

So why did Saudi Arabia invite this trouble? The answer can partly be found in the fast-falling price of oil. With oil prices down 70 per cent in the past year and a half, and Iran on the verge of breaking out on the international stage after a nuclear limitation deal that led to a lifting of international sanctions, Saudi Arabia suddenly finds itself on the losing end of Middle Eastern petro-politics.

With some experts predicting oil prices could remain low for the foreseeable future—prices are currently around $30 a barrel (all prices in US$) and falling this week—Saudi Arabia faces the challenge of maintaining an expensive economic system based on patronage and almost entirely reliant on oil revenues.

An October 2015 report published by the International Monetary Fund warned that the Saudis face a five-year limit on their ability to buy their way out of economic crisis with oil at an average of $50 a barrel. Last year, the kingdom posted a soaring deficit of US$98 billion. Next year, the report said, will be nearly as bad, if not worse. Massive reserves, estimated to be nearly US$700 billion, are depleting fast.

King Salman bin Abdulaziz, who acceded the throne a year ago, is considered an aggressive hardliner, eager to shore up power by any means necessary. Reform movements in the kingdom have struggled to gain momentum despite a growing chorus for change, including demonstrations by women for more rights.

Instead of meeting those calls, King Salman has opted to use a trusted tactic: promote fear and instability to justify the status quo. Executing Nimr plays directly into that strategy. But it might also mark the beginning of the end of the Saudi monarchy.

What the Saudi monarchy needs most is for oil to rebound, and fast. The best-case scenario, according to former U.S. ambassador to Saudi Arabia Robert Jordan, is if oil prices recover to $70 dollars a barrel by 2017. “If that happens and the Saudis reform their economy by cutting subsidies and imposing income taxes, for instance, their economy could recover,” he says.

But that doesn’t look likely to happen. Forecasts suggest low oil prices are here to stay, at least well beyond the five-year limit set by the IMF. OPEC, the oil-producing cartel that has manipulated oil prices since 1960, is, according to most analysts, virtually dead, undermined by internal rifts and the emergence of major new sources of oil in North America.

In the face of falling oil prices, Saudi Arabia has flooded the market with oil. “Maintaining record production levels despite the low prices is not only a way to hurt Iran but also a means for the Saudis to take back market share from the U.S.,” says Jordan. “Low prices will eventually drive out high-cost producers.” But the tactic has its limits. Even if supply dwindles as U.S. producers drop out of the market, once demand rises again, those players will be back.

On the other side of the equation is Iran. According to the IMF report, at $50 a barrel, the Iranians could manage their economy for another decade. “Iran’s economy is resilient to low oil prices over the medium and long terms due to its experience with sanctions, increasing tax base, the gradual slashing of subsidies and the investments that will occur as a result of the lifting of economic sanctions,” says Mohseni. “Oil prices are more important for Saudi Arabia’s political and social stability than for Iran’s.”

Indeed, one of the positive outcomes of the years Iran spent under economic sanctions was the effect it had on its domestic industries, Jordan adds. “The Iranians were forced to diversify their economy away from reliance on oil revenues,” he says. “It also has significant human capital in terms of a young, educated population. The Saudis have failed to keep up.”

Since 2009, Iran has been actively reforming its economy to pave the way for a transition to something approaching a free-market system. Reforms to energy subsidies, which used to be among the highest in the world, have taken some pressure off the national coffers, as have higher income taxes.

The net result is two very different societies. Whereas Iran has a reputation for hard work and resilience to lean times, Saudis are famous for their reliance on the monarchy to maintain their comparatively luxurious lifestyles.

Saudi Arabia is now a “wild card,” according to Kenneth M. Pollack, an expert on Middle Eastern political-military affairs at the Brookings Institution. In the wake of the nuclear deal between Iran and Western powers, “the Saudis may choose to ramp up their support to various Sunni groups fighting Iran’s allies and proxies around the region,” he told the U.S. Senate committee on foreign relations in August last year.

His prediction is proving accurate. And Russia’s entrance into the Syrian theatre has shifted the tide further in Iran’s favour. Regime forces, supported by Russian jets, have begun to reverse their losses and now stand poised to take back significant territory.

The Saudis have reacted by undermining Syrian peace negotiations. The latest round, held in Geneva on Jan. 25, were stripped of any meaningful outcome after the Saudi-backed opposition refused to attend. The Syrians, backed by Russia and Iran, widened the divide by insisting that they would only negotiate with an opposition of their own choosing. “Terrorists,” they said, meaning anyone supported by Saudi Arabia, would not be welcome at the table.

The standoff took another turn four days later when the Saudi-backed higher negotiation committee sent a delegation to the conference, but with the caveat that it would only discuss humanitarian needs and demand an end to the targeting of civilians by the regime and its supporters.

The longer negotiations drag on without an agreement, the more money Saudi Arabia will have to sink into its proxies—not only in Syria, but also its expensive intervention on the side of the Sunni government in Yemen.

Saudi Arabia would not be the first country to fall to a combination of war and cheap oil. In the 1980s, the Soviet Union, embroiled in a costly conflict in Afghanistan and facing an increasingly discontented population at home, was on its last legs. An oil crash, which saw prices fall from just over $100 per barrel (in today’s dollars) at the start of the decade to just over $20 by 1986, contributed in large part to the Soviet collapse three years later. Saudi Arabia is, in many ways, even more exposed to low oil prices than the Soviets were. And $20 a barrel no longer seems outrageous in the current climate. However, compared to the Soviets, there is obviously more interest among Western nations to ensure the Saudi monarchy doesn’t collapse. One positive outcome may be that the Saudis will be forced to institute the democratic and economic reforms they have been promising for years.

“The oil crisis could also present an important opportunity for the Saudis and the Iranians to sit down together and solve some of their disagreements in a diplomatic manner,” says Mohseni. “Iran is still a pragmatic actor and would be willing to negotiate if the Saudis turn around. But that looks unlikely given their current regional posturing.”

Instead, King Salman and his hardline cohorts appear to be playing all-or-nothing politics, and in the process are becoming increasingly estranged from their allies. For the Saudis, the rapprochement with Iran signals an end to U.S. engagement in the Middle East, Pollock pointed out to the Senate committee in August. “In the absence of American engagement, leadership and military involvement in the region, the [Gulf Co-operation Council] state—led, as always, by the Saudis—gets frightened,” he warned, “and their tendency when frightened is to lash out and overextend themselves.” Without U.S. support to maintain balance in the region, “things could get very ugly,” he concluded.

It’s not hard to imagine how: a Saudi collapse, or a significant weakening of the regime, would inevitably lead to more conflict. Bahrain, for instance, a Shia-majority nation ruled by a Sunni monarchy, depends on the Saudis for protection. In 2011, protests sparked by the broader democratic uprisings in the Middle East and North Africa led to a Saudi military intervention. Roughly a thousand troops remain stationed there to prop up the Bahraini monarchy.

More worrying is the threat of radical jihadis. While Saudi Arabia is blamed for being the world’s leading source of violent radicals, not to mention being the ideological brain trust for extremists, the monarchy itself has actively, and violently, crushed radical movements on its home turf that it considers a threat to its legitimacy. Without the iron fist of the royals, the heart of Sunni Islam would explode, with grave consequences.

As ugly as the Saudi regime can be, the world needs it. And the royals know it.