In defence of the trophy hunt

There's nothing wrong with a properly managed trophy hunt—at least, nothing worse than your hamburger

Let’s imagine that “Cecil,” the lion killed by American dentist Walter Palmer, had avoided that fate and was still enthralling tourists in Zimbabwe’s Hwange National Park. He would live, at most, another two or three years. At 13 years of age, he was already at the end of a normal lifespan for a lion in the wild. Sooner rather than later, he would die—of starvation, or disease, an attack by a rival lion, or perhaps hyenas. Lions outside zoos don’t die peacefully due to old age.

Instead, he was wounded by one of Palmer’s arrows, ran, suffered for 40 hours and was finally found and shot dead. Not a good way to go. And if Palmer wasn’t confident of a clean kill, he shouldn’t have taken the shot. But, all in all, not a bad life for the big cat. He lived a long time, sired a bunch of cubs and died free. Millions of the domesticated animals we consume suffer worse fates. Most of us don’t care, or choose not to think about it because it’s easier that way.

Allegations that Cecil was killed illegally—poached—are genuinely disturbing. And if it is proven that Palmer knowingly did so, he should be punished and deserves public scorn—though not the threats he’s now facing.

But this isn’t what’s fuelling the social media mob baying for Palmer’s blood. For them, it is the act of hunting itself, or, at least, hunting an animal that tourists like to photograph. 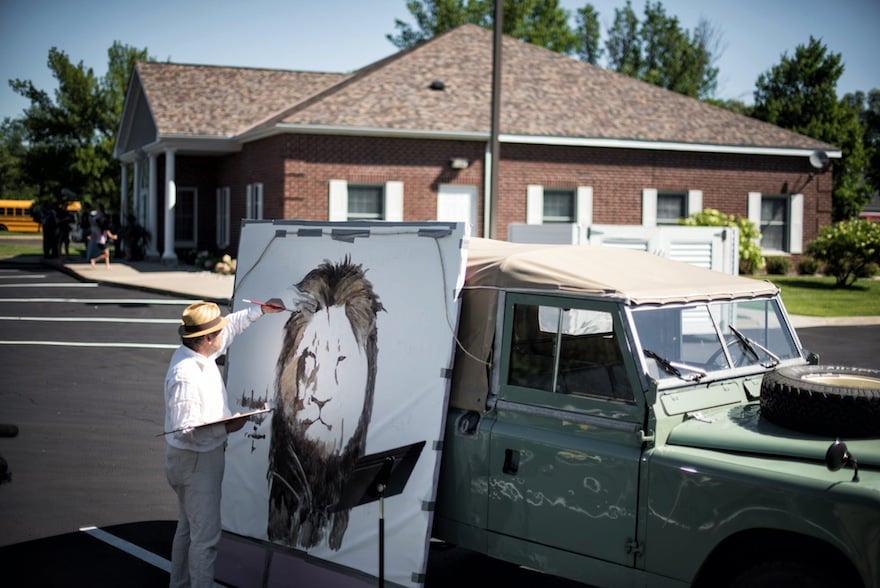 Artist Mark Balma paints a mural of Cecil, a well-known lion killed by Minnesota dentist Walter Palmer during a guided bow hunting trip in Zimbabwe, as part of a silent protest outside Palmer’s office in Bloomington, Minn., Wednesday, July 29, 2015. Palmer said that he had no idea the lion he killed was protected and that he relied on the expertise of his local guides to ensure the hunt was legal. (Glen Stubbe/Star Tribune via AP) MANDATORY CREDIT

Cecil, like all lions, was magnificent to behold. But let us acknowledge that is a subjective appraisal. He was less intelligent than the pigs we raise in cramped factory farms and kill in industrial slaughterhouses. He was a rare animal, but not an endangered one. There are more than 30,000 lions in Africa. He had a black mane and was said to be friendly—a clear case of anthropomorphism, which likely means he had simply grown used to safari jeeps.

So why the outrage over his death? Much has to do with how we perceive lions. They are evocative and iconic, which is why they have adorned heraldry for millennia. Much also has to do with why he was killed: for the perceived sport in it, and for the “trophy” pelt and head.

I have some sympathy for the emotions at play here. I hunt, usually without success, for meat. I’m not interested in shooting something I can’t eat. But I also have coyote fur on my parka, and someone trapped or shot the animal that provided it. I think hunting is a more ethical way to obtain meat than shopping for it. But the fact is, I don’t need venison in my freezer or coyote fur on my coat any more than you needed the bacon sandwich you had for lunch, or Palmer needs Cecil’s head on his wall.

Related: Q&A: Sonia Faruqi on a better future for farming

All of us, except the most careful vegans, are responsible for the killing of animals to satisfy our wants. (Sorry, vegetarians; you’re not off the hook. What do you think happens to male dairy calves or chickens?) Yet it seems perfectly understandable, even noble, when late-night television host Jimmy Kimmel breaks down while discussing Cecil’s death. Someone crying in grief over a hamburger would invite suspicions about his mental stability.

There are practicalities about trophy hunting that also must be considered—especially by those most concerned about the long-term welfare of lions and other sought-after game animals. Hunting provides a financial incentive to protect habitat that might otherwise succumb to farming, cattle grazing, forestry and human sprawl.

Sustainable and properly managed trophy hunts can also be lucrative for local communities, providing employment, an alternative to poaching and the means to fund conservation efforts. So can wildlife-watching safaris, but not all land is suitable for that sort of tourism. According to a 2007 paper by Peter Lindsey, a Zimbabwean academic, trophy-hunting outfitters are custodians of at least 1.4 million sq. km of sub-Saharan Africa, far more than land given over to national parks in countries where hunting is allowed.

Another wrinkle in the story of trophy hunting in Africa, and especially in South Africa, is that a lot of it takes place on private game farms. The animals are bred, fed and kept in a fenced enclosure until a client shoots them. Not my cup of tea, but, from a conservation perspective, probably not such a bad idea.

It’s also worth noting that trophy hunting is hardly limited to Africa. Canadian outfitters, many working with Inuit communities in the Arctic, provide a wide range of services. God help a client who bags a polar bear someone has named.