For one family of Syrian refugees, a harrowing sprint to safety was the first step on a long journey to Canada

JBEIL, LEBANON — Before the civil war, Mohamed Alftih and his brothers operated a printing factory in Aleppo, Syria’s largest city. They specialized in T-shirts and other custom-made clothing, most of it destined for European markets. “We used to live a very good life,” he says, sitting on a couch beside his wife, Randa, and their four children. “I had more than a decent income, we had a big house, and we lived peacefully.”

His kids went to school. There was plenty of food on the kitchen table. It was safe to walk outside.

When Alftih tries to explain how he ended up here—at a friend’s apartment on the Lebanese coast, 250 km from home, with no money and absolutely no hope of returning to the life he knew—the tears overpower his voice. “I’m sorry,” he says, trying to stay composed. His wife and three sons begin to cry, too, the memories still raw.

His daughter, just three years old, isn’t quite sure why everyone is so sad. Dressed in a little red shirt, Sham rubs her dad’s shoulder.

From the comfort of Canada, it’s difficult to grasp the utter enormity of the Syrian refugee crisis. It’s been treated more like an abstract debate than a horrifying reality. Should we welcome 25,000? Should we do it by this date or that? Will an ISIS terrorist sneak in on one of the planes? Amid so many headlines, and infinitely more opinions, it’s easy to forget we’re talking about actual people.

People like the Alftihs, who endured a hell on earth most Canadians could never fathom. “I could speak for days about what we suffered,” says the 45-year-old. 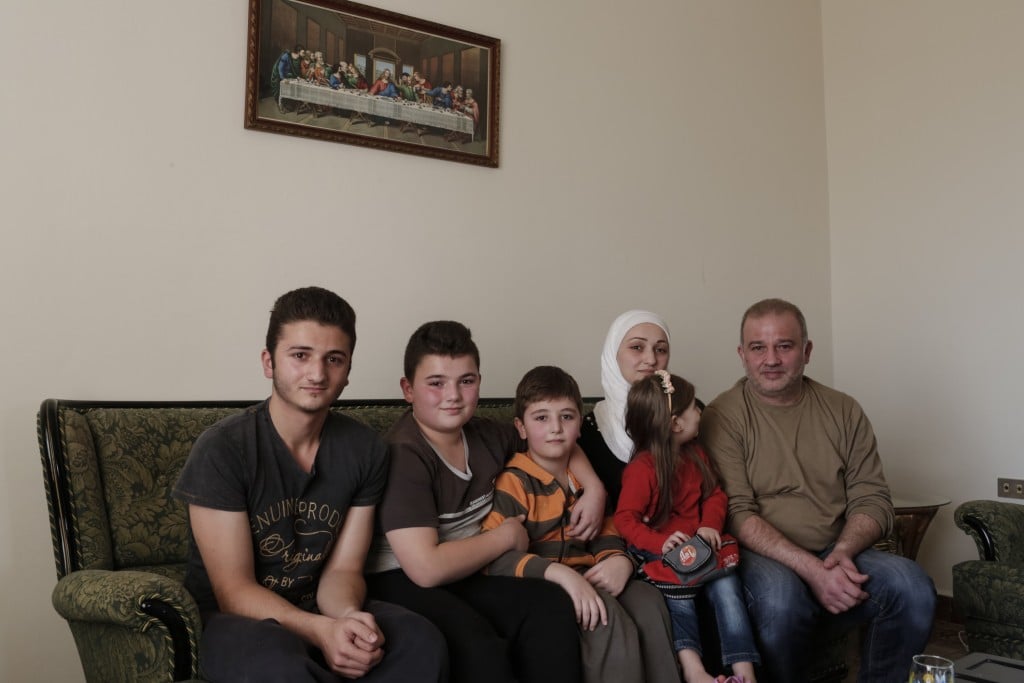 When the revolution began more than four years ago, his neighbourhood quickly descended into a combat zone. Militias took control of many industries, including the family factory; countless civilians were executed on the mere suspicion they supported the wrong side. Although his brothers fled the country (to Germany, to Sweden, to Denmark), Alftih chose to stay behind, moving his family to another Aleppo district he believed to be somewhat safer. “I needed to still make a living, so I rented a shop that sold mobile phone parts,” he says. “I worked in this shop for almost two years so we could live.”

Water grew increasingly scarce as the months went by, and with opposing checkpoints spread throughout the city, little food reached the region. “For the whole month of Ramadan, they would only allow parsley to be brought in,” Alftih recalls. “Only parsley—to make sure we eat like animals.” He watched people starve to death in the streets.

When a bomb annihilated his store earlier this year, the destruction left behind no real choice. “I decided Syria could not be lived in anymore,” he says. “We needed to travel.”

Their only hope was to reach the capital city of Damascus, but the lone road out of Aleppo was heavily fortified on both sides: soldiers on one, opposition rebels on the other. “They actually called it ‘The Passage of Death,’ ” he says. “You were always in danger because there were bullets being fired from both sides and you didn’t know where the bullets were coming from. But you had no other choice but to go through this open street.”

It was a spring morning, just after sunrise. The family carried a few bags, nothing more. Although Randa knew the plan, Alftih kept the children in the dark because he didn’t want to frighten them. “I thought: ‘If we die, we die. If we survive, we survive.’ ”

When their moment came, he told his three sons only one thing: sprint as fast you can. He squeezed Sham into his thick arms. “You see people running across the street like it’s Judgment Day—just running, bolting, across the street,” he says, choking back more tears. “Even if someone dies on the street, no one will pick them up.”

If Alftih had to guess, their route to safety was approximately 700 m. All six made it safely to the other side, a relief he can’t even begin to describe. From there, they managed to catch a bus to Damascus and eventually make their way to the border that divides Syria from Lebanon. 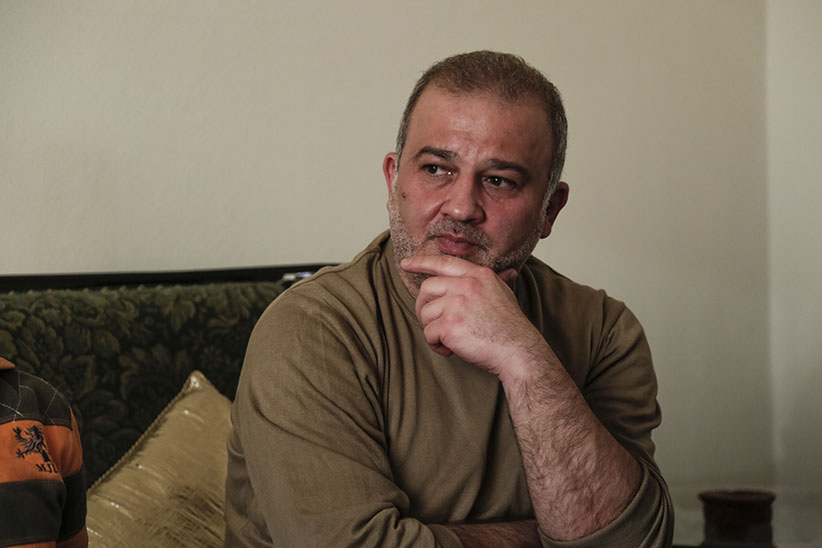 Mohamed Alftih, 45, from Aleppo in Syria sits in the home of friend with whom his family are staying near the town of Byblos in Lebanon, on November 28, 2015. The Alfith family are due to be resettled in Canada soon. (Sam Tarling)

Though eternally grateful for the hospitality of his Lebanese friend, Alftih knew his family couldn’t stay at this apartment forever. They needed a permanent plan. Should they try to reach Europe, as his brothers had? Should he return to Syria alone, try to find work, and send money to his family in Lebanon? “I didn’t know what to do,” he says. “Then my niece in Canada called and said: ‘No, uncle. Don’t do anything. We’ve spoken to a church group here and they’re going to sponsor you.’ ”

The group, “Save Haven for Refugees Peterborough,” is one of thousands that have formed in Canada since early September, when those jarring images of three-year-old Alan Kurdi, dead on a Turkish beach, opened the world’s eyes to this humanitarian crisis. Such private sponsorship groups agree to cover a family’s first year of living expenses (up to $40,000) and help them integrate into Canada. In this case, Ottawa approved the group’s application on Nov. 10; if the family passes all the necessary medical and security checks, they will be among the 25,000 refugees bound for Canada over the next three months. (Like so many others, they’re waiting by the phone to be summoned to an interview with Canadian visa officers in Beirut.)

“It’s really something to hear that people you’ve never met before want to help,” says Alftih, dressed in jeans and a tan shirt. “You realize they really have value for human lives, and how good the Canadian people are for having such thoughts and actions.” 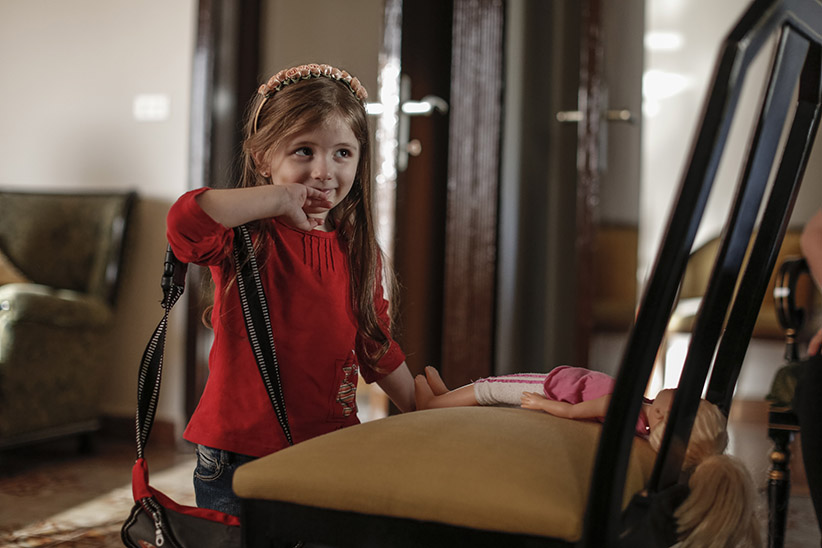 Sham Alftih, 3, from Aleppo in Syria plays in the home of a family friend with whom her family are staying near the town of Byblos in Lebanon, on November 28, 2015. The Alfith family are due to be resettled in Canada soon. (Sam Tarling)

If they make it to Peterborough (it’s hard to believe they won’t), Sham will start junior kindergarten next fall. She is already practising her alphabet. “A, B, C!” she says, a wide grin on her face. Ghaith, 10, would enrol at the same school, a few grades above. “I dream of becoming a doctor,” says Omar, 13.

At 16, Karim is the eldest. Many Syrians his age have already been forced into military service and are never seen again. “This is one of the main reasons that made me leave Syria,” his father says, starting to cry once again. “I would never let them take him.”

Karim wants to go to university and study engineering. “I think of a future now, because when I was in Syria I had completely lost hope,” he says, his voice soft. “All I saw was black. When I heard that Canada had accepted us to travel there, I got hope back.”

His father’s hope? To return to work. He helped build a successful business in his home country, and he’s tired of sitting still. “I know that the group helping us go to Canada is going to secure a house for us and help us a lot, but by my nature, I can’t stay without work,” he says. “I need to be productive.”

More than anything, he wants to show Canadians how grateful he is—and what a true Syrian looks like. “Especially after the latest Paris bombings, I know that people became scared of bringing in refugees from Syria,” he says. “But what I want to assure you of is that Syrian people are very peaceful. The people responsible for these bombings, whether inside Syria or in Europe, are very extremist individuals who belong to neither state nor religion. They know nothing of civilization or humanity, and especially nothing of Islam.”

By now, Sham has left the couch and is kneeling near a living-room chair, playing with some toy cosmetics. Her hair band is lined with a dozen roses, fake and pink. In so many ways, she is the luckiest person here: young enough not to remember.