In the heart of Kyiv, truce gives way to more bloodshed

'We will not take one step back,' opposition leader says in face of security crackdown 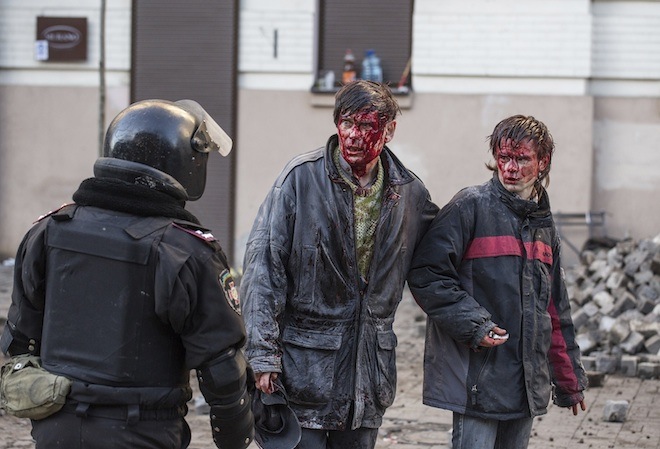 On Tuesday morning, a Ukrainian-Canadian named Olena found herself running from gun-wielding security forces on the streets of central Kyiv.

Olena (who asked that her last name be withheld) had joined peaceful protesters holding vigil at Mariinsky Park, outside the Ukrainian Parliament. It was around 9 a.m., a big day —Parliament was to vote on constitutional reforms that would limit the powers of Ukraine’s strong-armed President. People were “singing the Ukrainian hymn, listening to speeches, and trying to hear updates on what was happening inside the Parliament,” says Olena, who shot video of a lone priest standing atop a van, leading prayers.

About 10 minutes later, police “formed a turtle formation, put their shields in front and above them, and started advancing.” Thousands of demonstrator ran in fear. “There were shots behind me as I ran, sound grenades, rocks thrown … It was unbelievable.”

For weeks, relative calm had settled on the Ukrainian capital, which has been wracked by anti-government protests since mid-November. But all that changed on Tuesday.

Hours later, the central city was shrouded in thick, dark smoke—and entrapped in a mess of grenades and fireworks and bullets and water cannons. Police encircled the thousands of protesters on the square. Government forces closed the subway, shut down the opposition’s main TV station and set up checkpoints that effectively sealed off the capital.

In turn, protesters—who have reportedly seized more than 1,500 guns from military offices—have dug in their heels. They set fire to the barricades and then fed the leaping flames with blankets and wood, plastic and rubber tires. When police tried to extinguish the fires, protesters peppered them with petrol bombs. Some demonstrators were spotted with handguns. Others were seen using pickaxes to dig up pavement, for use as ammunition.

“[Government forces] want to sink Ukraine in blood,” warned opposition leader Arseniy Yatsenyuk. “We will not take one step back from this square. We have nowhere to retreat to.”

That afternoon, a Kyiv resident named Oksana travelled to the square with her husband to deliver medical supplies. “It was the most terrible night in my life,” she tells Maclean’s. “Women and adolescents climbed on the barricade and fell down. Man and woman were left lying on the barricade dead … Blood dripped on the pavement.”

Late that night, Oksana says she saw the corpses of several young boys. “These boys were ready to die for their country and its freedom, but I was not ready to see them dead.” Soon, new groups of young men arrived from Western Ukraine, to replace Kyiv’s frontline troops. Andrushkiv invited several of them to her home, “since they had no place to sleep. Their tent was burned by riot police.”

That night, broadsheets would report, President Yanukovych spoke on the phone with Russian President Vladimir Putin—who early this week agreed to resume financial aid payments to Ukraine, which had been frozen for several weeks. (On Monday, hours before the crackdown, Putin promised Yanukovych a $2 billion cash injection.) Nobody knows what was discussed but word of the phone call has fuelled rumours that Moscow is co-ordinating the police surge.

Vasyl, who lives about 20 minutes from the Maidan, arrived around noon on Wednesday. He brought food for the protesters—including cookies and sandwiches prepared by his wife. “We saw many women and elderly people busy handing out food,” he told Maclean’s. “You could hear the explosions and bullets fired randomly. I don’t know why but it felt peaceful … a complete cognitive dissonance.”

On Thursday morning, it appeared there was a tentative truce. But it did not hold. Government-allied snipers have opened fire. Protesters are hurling petrol bombs—and working to drive riot police from the square. Reuters reports that footage shows “activists in combat fatigues leading away several uniformed policemen they had captured.”

Meanwhile, it is beginning to look like martial law in Kyiv. On Wednesday, President Yanukovych alleged that protesters were attempted a coup—and announced his security forces would launch an “anti-terrorist operation” across the country, to deal with a mounting “extremist threat.” Such a declaration ostensibly grants the army sweeping powers—including the right to search, detain and fire on Ukrainians. A day earlier, the Ukrainian military—which has largely abstained from involvement in the protests—warned it might be deployed.

Some protesters have gone into hiding.

On Thursday, European Union ministers from Germany, France and Polan will hold talks in Kyiv. In the United States, the Obama administration is reportedly readying sanctions.