In the war on ISIS: Friends, foes and in between

America's allies in the fight against ISIS are now battling each other. Some say that's 'two steps forward, one step back.' 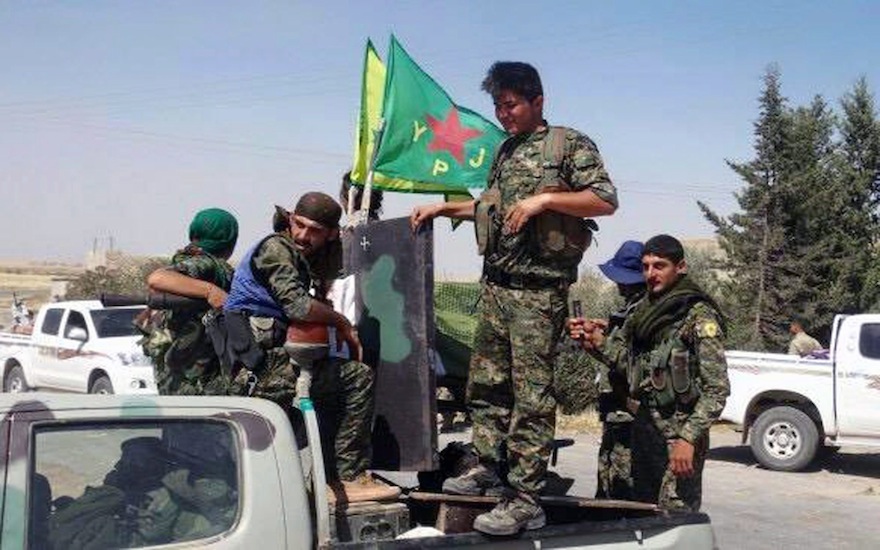 One year into the U.S.-led military mission against the so-called Islamic State, it is instructive to recall how the campaign began—and who were America’s partners on the ground when it did.

Some 10,000 didn’t make it to the mountain. Men and adolescent boys captured by Islamic State were slaughtered. Women and girls were enslaved and subjected to industrial-scale rape that is still ongoing.

Those on the mountain faced a similarly grim fate, trapped without food and water and with no obvious escape route. Among them was Zere Salim, a woman interviewed by Maclean’s last October. She described how four teenaged boys crept off the mountain to retrieve food from their abandoned village below. When they didn’t return, their father went looking for them. He found their headless bodies.

But most of the Yazidis on Mount Sinjar survived. They survived because of air strikes and aid drops carried out by Iraq, America, Britain and Australia—and because of a ground rescue led, in part, by the Kurdistan Workers’ Party, a far-left Kurdish militia known by its acronym, PKK, and by the PKK’s Syrian affiliate, the People’s Protection Units, or YPG.

Along with other Kurdish fighters, the two groups opened a corridor through Syria and back into Iraq—rescuing thousands and averting a genocidal massacre.

Since then, the YPG have been America’s most effective allies on the ground in Syria, freeing large swaths of territory in northern Syria from Islamic State.

This has made Turkey nervous, because of the close ties between the YPG and the PKK. The PKK conducted a decades-long insurgency in southeastern Turkey that resulted in some 40,000 deaths before settling into a shaky ceasefire in 2013. It is considered a terrorist organization by many Western countries, including Canada.

Though the YPG is officially a separate entity, the degree of its autonomy is murky. Large portraits of PKK leader Abdullah Ocalan decorate the offices of the YPG’s political wing, the Democratic Union Party.

It makes for a complicated web of alliances. The YPG may not be an obvious partner of the United States and other coalition allies, given its connection to the PKK, but it has proven to be a valuable one.

The PKK itself, while not actively partnering with the coalition, is also fighting on its side against Islamic State. The group joined the YPG in its defence of Kobani, a months-long battle in which Kurdish ground forces supported by American air strikes achieved an iconic victory in January.

But the PKK is currently also engulfed in renewed and steadily escalating conflict with Turkey. Some fear a renewed civil war looms. Scores of PKK militants, Turkish security forces and Kurdish civilians have died in recent clashes. Turkey’s prime minister, Ahmet Davutoglu, says PKK fighters must be “wiped out” from their mountain redoubts. A week-long military operation in the southeastern Turkish city of Cizre this month resulted in some 30 deaths. All but one were militants, according to Ankara. Eyewitnesses told the BBC the dead included 20 civilians.

Whatever gratitude Washington feels toward the PKK for its actions a year ago, it’s not doing anything to protect it from Turkey now.

That may be because, this July, Turkey’s foreign ministry announced an agreement with the United States to “deepen ongoing co-operation” against Islamic State.

After years of resistance, Turkey would now allow American and some coalition aircraft to operate out of its airbases close to Syria, and Turkish aircraft would take part in air strikes against Islamic State, as well.

The deal followed a bombing in Suruc, Turkey, in which 33 people died. Islamic State claimed responsibility.

Soon after announcing the deal, Turkey conducted a handful of strikes on Islamic State positions in Syria. But it also launched hundreds of raids against PKK targets in northern Iraq—hitting some of the same fighters who had previously battled Islamic State in Syria.

At the same time, Turkish security forces detained more than a thousand terror suspects—most because of alleged links to the PKK rather than to Islamic State.

“It’s clear that [Turkish President Recep Tayyip] Erdogan is using the whole ISIS issue to focus on PKK and the Kurds,” says Yezid Sayigh, a senior associate at the Carnegie Endowment for International Peace Middle East Center in Beirut, referring to Islamic State by another acronym.

Turkey, he says, is paying “lip service” to the fight against Islamic State, and may be tacitly assisting it.

“It does seem very likely—to put it sort of carefully—that Turkey, or, at least, the intelligence service, was aware of people coming through who almost certainly, if not definitely, were joining ISIS. The smuggling of goods across the border could only be done with their knowledge or their tolerance. [There are] many reports of wounded fighters being treated in Turkey. I’ve heard this just too often from too many sources that I trust to think it’s not true.”

Steven Cook, a senior fellow at the Council on Foreign Relations, says there is no hard evidence Turkey has supported Islamic State, but he says there’s plenty of evidence it has turned a blind eye to jihadists transiting to Syria, and that it coordinates with other jihadist groups in Syria.

Turkey’s restrained response to the growth of Islamic State in its own backyard stems from a belief that the world’s primary goal in Syria should be the downfall of the regime of Bashar al-Assad.

For years, it has been pressuring America to back the creation of a protected no-fly zone in Syria, from which attacks by Syrian rebels against Assad might be launched. After the deal on the use of airbases was announced, the Hurriyet Daily News reported that unnamed Turkish sources said Washington had, in fact, agreed to such a zone. American officials denied this.

The Assad regime has killed far more Syrian civilians than has Islamic State. And its brutality is an effective jihadist recruiting tool. Ankara’s focus on Assad rather than Islamic State also makes a certain amount of sense for Turkey, given how exposed the country is to Islamic State revenge attacks.

“If you’re a Turkish policymaker, you have to wonder, if you hit ISIS, when they’re going to start killing people in Istanbul and Ankara and Izmir in retaliation,” says Cook.

Says Sayigh: “One of the reasons why the Turks have been somewhat tepid about Taking on ISIS too actively has been to try to buy goodwill both of ISIS across the border, but also of its supporters among its own domestic population.

“Now, at some point, the Turkish government is probably going to have to stop playing this double game and confront the fact that whatever its geostrategic interests are, it cannot afford to have someone like ISIS become a real presence inside Turkey that can potentially threaten security, stability and, therefore, the economy.”

Related: Where is Canada in the fight against Islamic State?

The PKK is also a threat to Turkey. But Erdogan’s offensive against it may also be driven by domestic political calculations.

Stoking conflict with the PKK allows Erdogan to rally the Turkish nationalist vote against the pro-Kurdish People’s Democratic Party (HDP), whose success in the June general election denied his party its majority. Erdogan has accused the HDP of being a PKK pawn. In recent days, angry crowds have attacked HDP offices, including its national headquarters in Ankara.

“In the struggle for a stable, prosperous and democratic Turkey, this is terrible,” says James Jeffrey, a former American ambassador to Turkey.

“It could lead to a major upsurge in PKK violence against Turkey that is back to the quasi-civil conditions that we had back in the 1990s. It could result in a parliament beholden to Erdogan, who has an agenda for an essentially quasi-presidential dictatorship.”

It’s unclear to what extent America was aware that Turkey’s anti-terror campaign would be directed against the PKK rather than Islamic State, when it struck the agreement with Turkey this summer—whether America agreed to look the other way while Turkey pounds the PKK in exchange for the use of Turkish airbases. State Department spokesman John Kirby calls the whole thing a “coincidence.”

Maybe it was. And maybe Turkish co-operation against Islamic State is worth more to Washington than is further help from the PKK. American jets and drones flying out of southern Turkey can now reach Islamic State territory in minutes.

Jeffrey, now a fellow at the Washington Institute for Near East Policy, describes these developments as a “net gain” in America’s fight against Islamic State, but one that consists of “two steps forward and one step back.”

For the PKK, it must demonstrate the often-fleeting nature of American friendship toward non-state actors in the Middle East.

As for the Yazidis, they must be grateful their exodus from Mount Sinjar took place before America’s Turkish allies started bombing the soldiers on the ground who helped guide them to safety.