Inside a White House holiday party

When you arrive at a White House holiday party, there is a long security line out in the cold, followed by two ID checks in heated tents. 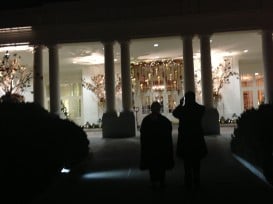 But before you even make it to the x-ray machine, Secret Service agents ask you to stop and stand “motionless” in front of a wall.  There is no visible machine, no sound, no evidence millimetre wave detectors or special lasers.

There is, apparently, a specially-trained canine sitting behind a screen, sniffing out danger — or in my case, getting a nose full of evidence of a cat person. And it’s not the last canine we’ll encounter inside the White House, richly decked out for the holidays. 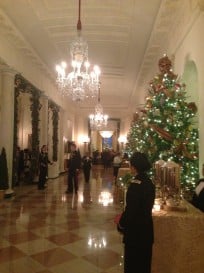 The official theme of this year’s decorations – which include no fewer than 54 Christmas trees — is “Gather Around: Stories of the Season.” But let’s face it, the real theme are the Obamas’ Portuguese Water Dogs: Bo, and his little sister, Sunny. 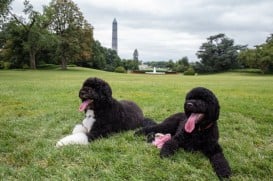 Some 90,000 visitors are expected during the holiday season. They enter through the East Colonnade, where there is a coat check, and decorations dedicated to military families. There is a tree dedicated to families who have lost loved ones, with ornaments placed by “Gold Star families” and a station where visitors are encourage to write postcards to troops service abroad over the holidays to thank them for their service – and to pledge volunteer hours to give back. (The holiday decorations themselves are the work of 83 volunteers, many of them military families — and many ornaments made by kids who live on military bases.) 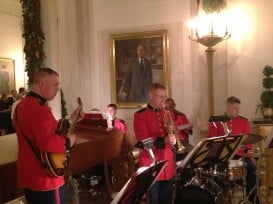 The first sign of the dog theme are two large ribbon topiaries of the First Dogs. 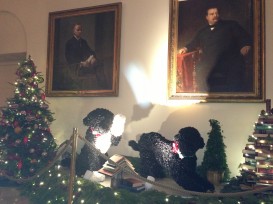 Yes, you read that right. Ribbon Topiaries. Of the First Dogs. And they move. They are supposedly aimed at kids, but no one can resist a mechanical tail wagging in front of serious portraits of Calvin Coolidge and Grover Cleveland.

The parties are on the State Floor, where State receptions and dinners are held. Each room (Green Room, Red Room, Blue Room… and others) feature special Christmas trees and decorations. 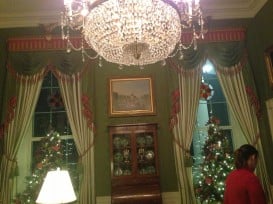 The Vermeil room, named after the silverware on display there, features two Christmas trees adorned with “wreath wring ornaments wrapped in satin yarn”. But the highlight are the striking portraits of several First Ladies on the walls. 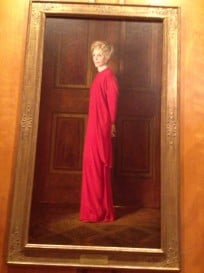 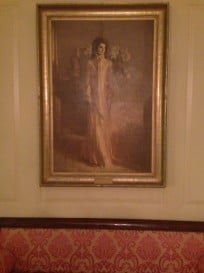 The State Dining Room features a long buffet under the watchful gaze of Abraham Lincoln. 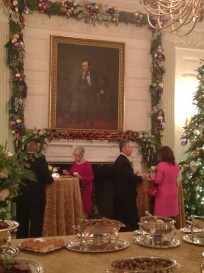 There are two 14-foot-high Christmas trees, decorated with tin hearts, painted and decoupaged with the word “Gratitude.” But the highlight is the “Gingerbread House” – a 300-pound edible replica of the White House built by the president’s pastry team over the course of several weeks. 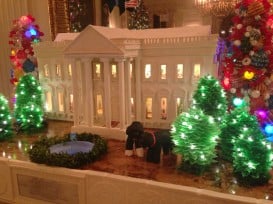 And more dogs! There are mini Bo and Sunny sitting on the front steps of the House, lit from within, with a functioning replica of the North Lawn fountain. 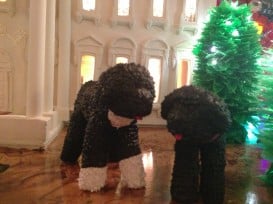 But wait, there’s more… The gingerbread house itself sits on top of a life-size fireplace made out of cookies. That is, “anise flavored Springerle cookies.” According to a sign, these are “sweet treats brought to Pennsylvania by immigrants from German in the 18th century. These cookies are made from carved wooden molds used to imprint an image onto the cookie dough, a 1,000-year-old tradition that celebrates family history, stories, and culture through the images.” Framing the hearth, a “sugar paste recreations” of the tiles commissioned for President Franklin Delano Roosevelt’s fireplace, to remind visitors of his famous “fireside chats.” 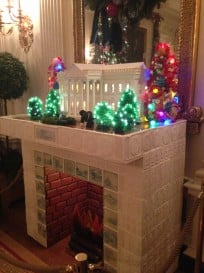 But, never mind that, because there are also Bo and Sunny cookies: 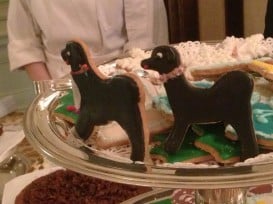 On the wall of the East Room is the massive White House crèche. It has been a part of the White House holiday décor since it was given by the Engelhard Family during the Johnson Administration in 1967. Originally from Naples, Italy, the Baroque-style set consists of 44 terra cotta and wood figures, some over 300 years old. 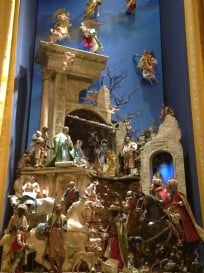 Eventually, guests wait in line in the Map Room. After being separated from their hand bags and  instructed not to “hand anything to the president,” guests are guided to a separate room for a quick snapshot with the First Couple who smile and briefly pose with each visitor, whose names are read off of an introductory card. There are more than 20 holiday parties this month at the White House. That’s a lot of tedious smiling and posing to endure — but perhaps a small price for living inside these walls. 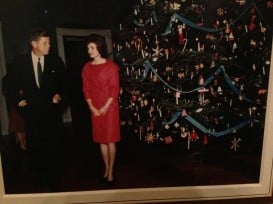