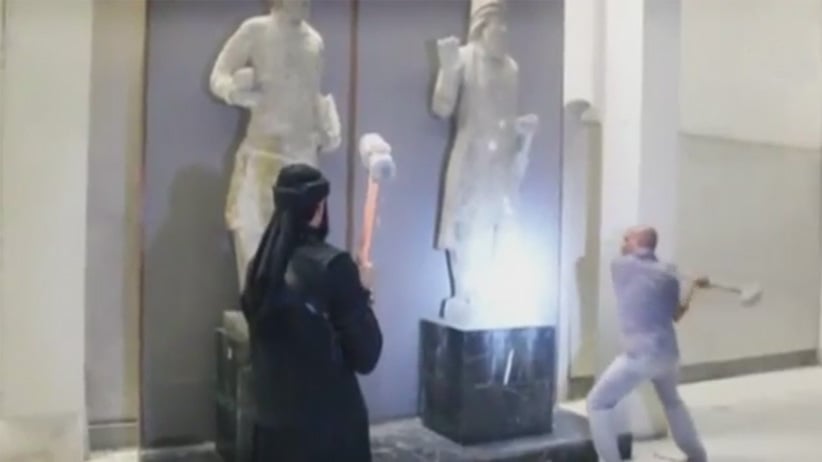 It takes more to shock us than it once did. At least, this is what Islamist militants think. They continually look for new ways to grab our attention, to terrify us with their fanatical determination. The gothic horror of burning a caged hostage alive was an example. So, too, was their less graphic but equally nihilist destruction of the ancient Assyrian city of Nimrud.

These acts were intended, at least partly, to cut through the noise, to startle and dismay us. In this regard, the terrorists must solve the same problem facing the manager of the local movie theatre: When everyone is constantly inundated with distractions, how do you get anyone to pay attention?

The amount of information being transmitted to us has never been greater. We are drowning in stock quotes, cat videos, junk emails and breaking news—all pumped directly into the computers on our desks, the phones in our pockets and, now, the watches on our wrists. The only way for Islamic State to stand out is to commit increasingly horrifying atrocities.

The terrorists are actively helped by our politicians, who shamelessly amplify the acts of these desperate men. Instead of dismissing them as the shabby criminals they are, on the run and forced to hide in distant deserts, our political class elevates them into “existential threats.” Pause and consider that for a moment. In North America over the last 20 years, even taking into account the Sept. 11 attacks, twice as many people have accidentally drowned in their bathtubs than were killed by terrorists. And yet, our politicians and officials will look us in the eye and insist the very existence of Canada is threatened.

It is no wonder, then, that we are left with the impression that Islamist militants are plumbing new depths, ushering in these dark and most dangerous of times. Sadly, this is not true. The only thing noteworthy about these crimes is how relatively rare they have become.

History is, unfortunately, filled with groups who surpassed even Islamic State. The genocide in Rwanda was only 20 years ago. Twenty years before that, the Khmer Rouge murdered more than 1.5 million Cambodians, many by torture. A few years before that, the Pakistani army killed more than 300,000 in East Pakistan, now Bangladesh, and displaced another eight million. The Rape of Nanking and the Holocaust remain in living memory, and just beyond that lies the Turkish genocide of the Armenians and the death of 10 million Congolese at the hands of the Belgians.

Syria, in particular, has been terrorized by far too many murderous conquerors, long before it was cursed with Islamic State. When the “Sword of Islam” Tamerlane invaded, he massacred the citizens of Aleppo and left a pyramid of 20,000 skulls outside the city gates. In the 13th century, the genocidal Mongols overran Syria four times, destroying any city that did not immediately surrender. The Crusaders, when they arrived, killed Christian, Jewish and Muslim civilians alike. When the Romans invaded Syria, they did not just slaughter or enslave every man, woman and child they defeated; they also plowed the very ruins to erase all memory of the vanquished.

Remember the Assyrians, who built the recently bulldozed city of Nimrud? They went even further than the Romans, sowing their enemies’ land with salt to poison it for generations. There was an inscription in a temple wall in Nimrud itself (presumably gone now), which recorded that, in 883 BCE, the Assyrian King Ashurbanipal captured the city of Tela, then flayed alive all the chief men and covered the city walls in their skins. He then burned or maimed everyone else, including children. Islamic State looks almost quaint in comparison.

It is important to remember this: Regardless of what our politicians claim, these ragged fanatics are not some new, world-ending form of evil. They are merely pale reminders of the horrors mankind used to commit with regularity. We should not allow terrorists or our politicians to frighten us. The only thing unique about Islamist militants is that they are now outliers; a reminder that, for the overwhelming majority of the planet, life is far more peaceful and safe than it has ever been. And soon, like the Assyrians in Lord Byron’s poem “The Destruction of Sennacherib,” Islamic State, too, will falter and disappear, their lances unlifted, their trumpets unblown.