Adnan R. Khan: Canada armed and trained the Kurds. To compare their independence vote to Quebec is a ploy to wash Canada's hands of a mess it helped create. 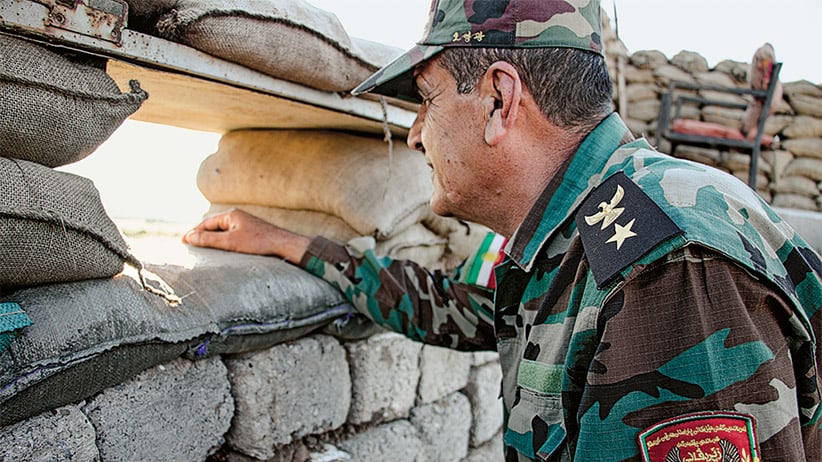 Al Khidhir, Iraq Colonel Abdularrahman Hassan, a commander of the Zeravani forces, keeps an eye on Islamic State positions at the frontlines near Mosul. (Photograph by Adnan R. Khan)

On Monday, Iraq’s Kurds went to the polls to vote yes or no on a seemingly simple question: “Do you want the Kurdistan Region and Kurdistani areas outside the (Kurdistan) Region to become an independent country?”

On the face of it, the question was straightforward enough and, after more than a century of aspiring to freedom, the response virtually guaranteed. Yes, the Kurds overwhelmingly voted, they do want an independent country.

No kidding. The question was the equivalent of asking Toronto Maple Leaf fans if they want a team capable of winning a Stanley Cup. You don’t need a referendum to know what the answer would be. The Kurdistan Regional Government’s justification for holding the referendum was equally spurious. A yes vote, it said, would not lead to a declaration of independence. It was simply an exercise in documenting the will of the people.

The will, however, was never in doubt, which raises the question: why hold the referendum in the first place?

Here’s where this key clause in the question comes into play: “Kurdistani areas outside the (Kurdistan) Region”. Those contested regions, technically still a part of Iraq, including the oil-rich Kirkuk province, were taken over by the Kurds during the fight against the so-called Islamic State. The Kurds now say they have no intention of giving them back and the referendum looks increasingly like a means to justify their annexation.

RELATED: Why Canada has a major role to play in rebuilding Iraq

It’s a messy situation, which makes Justin Trudeau’s response to the referendum even more baffling.

On Sept. 25, the day of the referendum and after months of silence, Trudeau finally spoke publicly on the issue:

“It’s too early to weigh in on hypotheticals,” he said, “particularly since as a Quebecker I’m sensitive to other countries weighing in on internal decisions around the future of a country or separation questions. I was involved in two referendum campaigns in Canada where we very much appreciated foreign interlocutors not weighing in on what Quebeckers should be choosing or what Canadians should be choosing and I’m going to respect the process in place.”

Let’s break that down: It’s unclear what Trudeau meant by “hypotheticals”. Was he referring to the outcome of the vote? Clearly, that was never in question. Was he remarking on how neighbouring countries and Iraq’s central government in Baghdad would react? That, also, was predictable: the Turks and the Iranians made their feelings clear weeks before the vote, declaring in no uncertain terms that they were opposed and that there would be consequences if the referendum was held. The Iraqis were equally antagonistic, declaring the vote unconstitutional (which it was) and warning it would destabilize Iraq at a time when ISIS remains a very real threat.

As of Tuesday, the Turks have threatened to blockade Iraq’s Kurdistan Region, which would virtually cut it off from the outside world, and held military exercises on its side of the border. The Iranians have canceled flights into the region while the Iraqis have set a Friday deadline for the Kurds to turn over control of their airports to the central government or risk a blockade of their airspace. The Iraqi parliament has also passed a resolution calling for troops to be sent to Kirkuk.

None of this was “hypothetical”. In fact, it was all inevitable.

The comparison to Quebec’s referenda on independence is also cynical and grossly misleading. Unlike the Kurdish vote, those in Quebec were legitimate exercises in determining the will of the people. Support for independence was never a foregone conclusion in Quebec, and the results were binding. They were also held under legal cover, through constitutional processes.

Lastly, and most importantly, Canada has already interfered in Kurdistan. Pretending otherwise is either naïve or a crude attempt to sweep Canada’s meddling under the rug. The train and assist mission, approved by the Harper Conservatives in 2014, dispatched a contingent of special forces trainers to Iraqi Kurdistan tasked with embedding with Kurdish forces and getting them up to speed on the kind of asymmetric warfare that would be needed to defeat ISIS in Mosul.

The problem was, Canada focused its attention on one group of fighters only, risky business in a place like Kurdistan, where political factions have gone to war with each other in the past.

The group, known as the Zeravani and loyal to Iraqi Kurdistan’s Barzani family, rang alarm bells with Canadian diplomats in Turkey and Jordan who complained to Maclean’s in 2015 that Canada was destabilizing Kurdistan’s wobbly political alliances.

The Liberals didn’t listen. When the party took power in late 2015, it doubled-down on the Kurds, canceling the fighter jets but tripling the special forces trainers. It even promised the Kurds that Canada would furnish their forces with millions of dollars of new military gear.

Then something unexpected happened: the Kurds only ended up playing a secondary role in the Mosul offensive, leaving the bulk of the fighting to the Iraqi army. And once victory was near, they announced the referendum on independence.

It looked like a classic bait and switch. The Kurds got what they wanted: more territory and the best training for their forces the world has on offer. The Liberal government has resisted following through on its promise of sending arms, for now, but the the training the Zeravani have received has transformed them into a capable fighting force.

How they will be used now is a question all Canadians should be asking. According to Kurdish commanders who spoke to Maclean’s last week, Canada’s special forces have now shifted to Kirkuk, to support the Peshmerga in the offensive to retake Hawija, ISIS’s last major stronghold in Iraq. The Kurds also claim parts of Hawija for their future independent state.

So the game is still on, and the outcomes look bleak. If the Kurdish government bows to international pressure and cancels the referendum results, it loses legitimacy in the eyes of its people, at a time when Kurdistan’s domestic politics are extremely volatile.

If it stands its ground, it will have to face economic and geographic isolation, surrounded on all sides by enemies. War with Iraq, or even Turkey, is a distinct possibility. Barring that, the internal pressures isolation would bring, experts warn, could tear Kurdistan apart and spark another civil war.

Regardless of how things play out, Canada will have to answer for the role it has played in letting things get to this point. No doubt Kurdish independence aspirations are legitimate, but the timing of the vote could not have been worse. Canada cannot sit quietly on the sidelines as Iraq falls apart. There is nothing “hypothetical” about it.