After nearly eight months of waiting, the final announcements of the #GreatKateWait3 came fast and furious. At 8:22 am London time, Kensington Palace announced that Kate was in the early stages of labour and had been admitted to the Lindo Wing of St. Mary’s Hospital. At 1:03 pm, another tweet was released: Kate had given birth to a baby boy at 11:01 am. The prince weighed in at 8 lbs. 7 oz., (one ounce heavier than George and four ounces more than Charlotte).

The Queen, The Duke of Edinburgh, The Prince of Wales, The Duchess of Cornwall, Prince Harry and members of both families have been informed and are delighted with the news.

Mother and child “are both doing well,” the announcement stated. And just like that, the newborn is catapulted to fifth in line to the throne, bumping down his uncle, Prince Harry, to sixth. The new child is the sixth great-grandchild of Queen Elizabeth II. 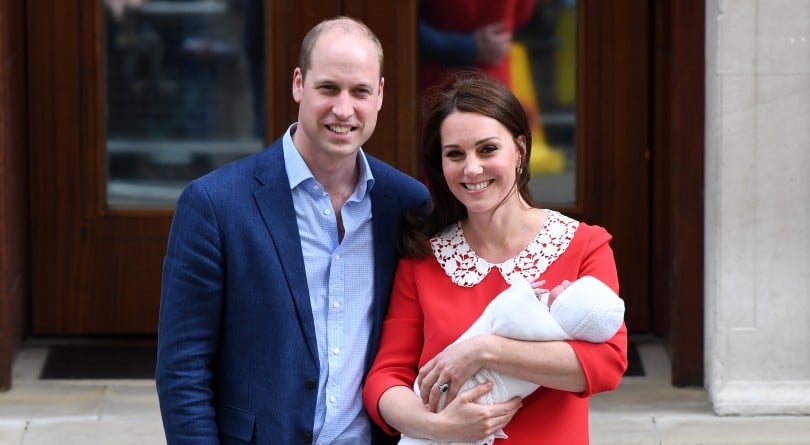 Catherine, Duchess of Cambridge and Prince William, Duke of Cambridge depart the Lindo Wing with their newborn son at St Mary’s Hospital on April 23, 2018 in London, England. (Photo by Samir Hussein/WireImage)

In addition to a tweet, the Gazette, the official public record for the United Kingdom since 1665, published an “extraordinary” issue for the royal birth, recording time, weight and sex for posterity.

It’s also a historic day for the royal family: for the first time in history, a girl—the child’s older sister, Princess Charlotte—will maintain her place in the line of succession, despite the birth of a younger brother. That’s because the royal family adopted the rule of equal primogeniture a few years ago, meaning that birth order determines order to the throne, unlike the old days when younger brothers would leapfrog over their older sisters.

The baby has not been named yet, though it’s expected a name will come soon. Siblings Prince George and Princess Charlotte got their names two days after being born. (Though, of course, Maclean‘s has analyzed which names are the most popular.) And like his older brother and sister, he’ll be known as His Royal Highness Prince [name] of Cambridge. 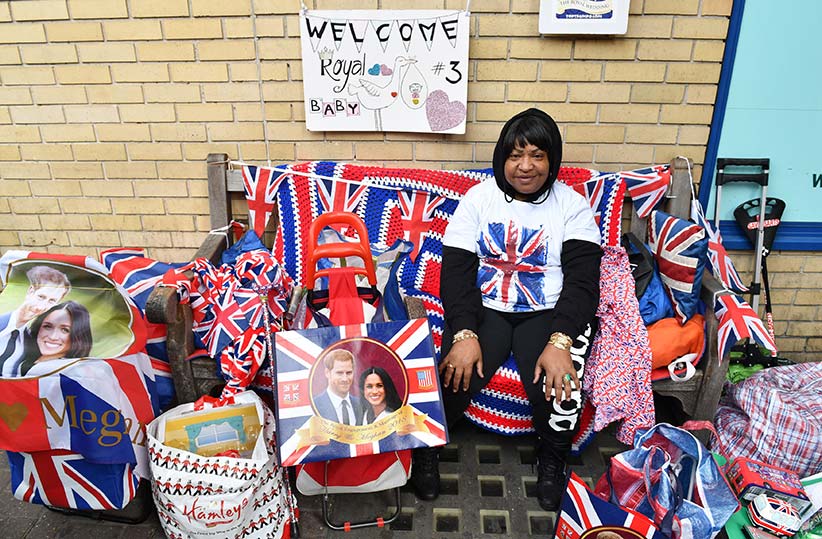 Royal fan Sharon McEwan camped outside the Lindo Wing at St Mary’s Hospital in Paddington, London, where the Duchess of Cambridge has been admitted in the early stages of labour. (Photo by Dominic Lipinski/PA Images via Getty Images)

READ: The double standards of being a royal child who’s a ‘spare of a spare’

The news came too late for the Evening Standard, which had to run a “Kate in hospital” headline.

Today’s @EveningStandard: Kate in hospital for baby no3 & Whitehall plans for customs union fix that looks like trade deal + @theresa_may writes on the new Millicent Fawcett statue as a symbol of the fight for equality + Nick Hardwick on ending parole board secrecy pic.twitter.com/BXe0VGciaT

It’s also good news for others in the royal family. Prince Andrew may be doing a bit of a celebratory dance—he doesn’t drink—because the arrival of the new baby to the duke and duchess of Cambridge means the last obstacle has been lifted to his possible remarriage to Sarah, duchess of York (the former Sarah “Fergie” Ferguson). The new baby bumps him down to seventh in line to the throne, meaning he doesn’t need his mother’s permission to marry—something all in the first six spots still do, by the revised law.

Though the couple divorced two decades ago after a tumultuous marriage, they are extremely close. For years, Fergie has shared Andrew’s residence of the Royal Lodge at Windsor. It’s widely believed that the biggest opponent to their remarriage is Prince Philip, 96, who hated the damage the scandal-plagued Sarah Ferguson inflicted on the royal family, even after their divorce. For instance, in 2010, she was caught selling access to her ex-husband to a “businessman” who turned out to be an undercover reporter who was videoing their conversations.

The Queen, who has soft spot for Fergie, would never cross her husband on this matter. Now, she doesn’t have to.

My warmest congratulations to the Duke and Duchess of Cambridge on the birth of their baby boy. I wish them great happiness for the future.

Congratulations to The Duke and Duchess of Cambridge on the safe delivery of their baby, a brother for Prince George and Princess Charlotte. May God bless them and all of their children with love, happiness and health.

It’s a boy! @RoyalNavy sailors and @RoyalMarines on board @hms_albion have sent their best wishes and congratulations to @KensingtonRoyal with a special flight deck photograph from operations in the Asia Pacific region. #royalbaby pic.twitter.com/THJV5mD0wn

Congratulations to the Duke and Duchess of Cambridge on this wonderful news of the arrival of a little prince. #RoyalBaby @KensingtonPalace

Canada welcomes a baby boy to the Royal Family! Sophie & I send our congratulations to William and Kate, the Duke and Duchess of Cambridge, and to George and Charlotte on the new arrival.

While social media explodes in congratulatory tweets, some moan about the cost to the pubic purse for yet another Windsor. Sure, this prince is the son and brother to future kings, but most of his lifelong expenses will be borne by the family itself. Only the Queen and Prince Philip get public funds to support their public duties; the rest are financed by the Queen herself or Prince Charles, as Carleton University’s expert in all things Crown-related explained in a tweet:

Let’s try this again: the new baby’s expenses will not be borne by the British taxpayer. The Duchy of Cornwall, a private estate, provides Will and Kate with most of their income. https://t.co/cY8B5DKAWB

Let us lay the blame where it belongs: the French. https://t.co/oGPc3BJWLC

Late this afternoon, Prince William left his wife and newborn baby for a quick drive home to Kensington Palace to pick up George and Charlotte and return to the hospital so they can get a peek at their new brother. George was still wearing his school uniform, while Charlotte, in nursery school, wore a floral dress and sweater. While George refused his father’s entreaties to wave for the assembled media, Charlotte didn’t stop waving until she entered the hospital. For bonus points, she did it while walking on tip toes.

Photographers shouted “TURN, TURN” to the Duke of Cambridge as he and his children walked in the hospital as they all wanted the money shot.

Two-year-old Princess Charlotte was the only one to oblige, as she turned and waved to the press pack #RoyalBaby pic.twitter.com/gDLYBchJHd

The kids were in the hospital for less than an 45 minutes when the official Kensington Palace feed tweeted that they’d left (via a back entrance) for their home at the palace, and that Kate and baby would be leaving soon with William. 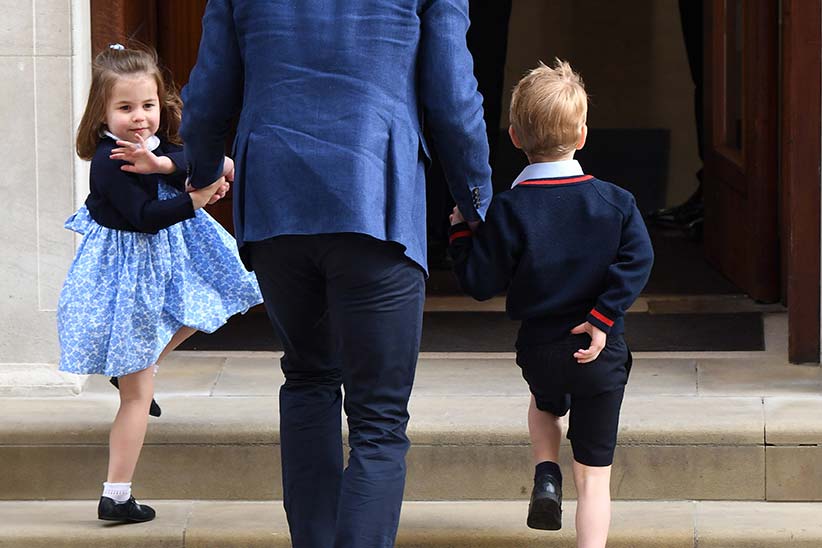 LONDON, ENGLAND – APRIL 23: Prince William, Duke of Cambridge arrives with Prince George and Princess Charlotte at the Lindo Wing after Catherine, Duchess of Cambridge gave birth to their son at St Mary’s Hospital on April 23, 2018 in London, England. The Duchess safely delivered a boy at 11:01 am, weighing 8lbs 7oz, who will be fifth in line to the throne. (Photo by Samir Hussein/WireImage)

Kate wore blue for George’s first photo shoot, and yellow for Charlotte’s. For the record, William wore shades of blue on both occasions, breaking the look each time with the same brown suede shoes. For their third child, Kate wore red, and William again wore blue. They both smiled but looked tired. “Happy,” William said for both of them.

The baby, like his siblings, was bundled securely in a white outfit, wrapped in a shawl, protection against the brisk April wind.

After pausing for a brief moment outside to allow the assembled media, who had now been standing there for nearly 12 hours, to get their first peek of the baby, Prince William said George and Charlotte were “very happy, delighted” to meet their new brother.

Then they stepped inside, put their baby in a car seat and left for home, with William at the wheel.