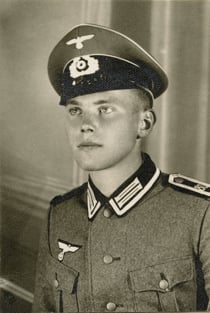 In 2005, Moritz Pfeiffer, a young German history student, interviewed his grandfather about his role in the Second World War. Then he fact-checked what his grandfather told him. What was intended to be an exercise in scholarship and family history unearthed a series of evasions and half-truths. The results are in a new book, My Grandfather in the War, 1939-1945, which illuminates a dying generation’s ongoing reluctance to admit guilt for its support of Nazism and for the genocidal crimes committed in its name.

“At first I was just the history-studying grandson interested in questioning his grandparents about their wartime experiences,” says Pfeiffer, now a historian at an SS museum at Wewelsburg Castle in Germany. “I noticed some contradictions in their stories and a gap between their portrayal of that time and what I had learned in university. So I decided to check the facts.” It turns out their enthusiasm for Hitler and the Nazi regime was “very much bigger,” he says, “than they admitted decades later.”

Pfeiffer’s book is the latest contribution to a debate that has at times raged in Germany over how much responsibility ordinary Germans had for Nazi crimes. Immediately after the Second World War, some West German historians argued that a relatively small number of ideologues foisted Nazism on the rest of the population. This historiographical perspective has changed in recent decades. But according to Rabbi Marvin Hier, founder and dean of the Simon Wiesenthal Center in Los Angeles, the reluctance of Germany’s wartime generation to acknowledge its support for Nazism persists.

“In all of our research, this is a common thing. They don’t want to fess up that they were early supporters,” he told Maclean’s. “It was ordinary people who brought Hitler to power. It took a whole society to produce these mass murderers. They were cheered on. If they thought that the whole of German society hated them, they wouldn’t have done what they did.”

Pfeiffer questioned both his maternal grandparents. His grandmother, Edith, was too ill to be interviewed in detail, but Pfeiffer had access to many of her letters. His grandfather, identified only as Hans Hermann K., was an officer in a Wehrmacht infantry regiment, part of the Sixth Army that invaded the Soviet Union and was virtually wiped out at Stalingrad. (Hermann was wounded and evacuated to Germany.)

The war in the east was unmitigated slaughter. Jews were shot by the thousands, civilians murdered and starved, Russian prisoners of war left in open-air camps to die of exposure and be eaten by their hunger-crazed comrades. Hermann, however, claimed to know little of this. “When we talked about war crimes committed by front troops, he said, ‘I didn’t know about this. My unit was in the hinterland.’ ” When they spoke of war crimes behind the front lines, again, Hermann feigned ignorance—“I can’t tell anything about that.”

In 1943, following defeat at Stalingrad, German propaganda minister Joseph Goebbels delivered a speech in Berlin describing “international Jewry” as “the devilish ferment of decomposition” and urging Germans to back total war.

Hermann told his grandson he didn’t agree with Goebbels and considered him a liar, but Pfeiffer found a letter in which he had praised the speech. Hermann also claimed all war crimes were committed by the Waffen SS, rather than the regular German army. This myth of a “clean Wehrmacht,” as Pfeiffer puts it, was widely accepted after the war. In truth, while the majority of German soldiers were not personally culpable for war crimes, most supported Nazism, and it was their advance into Eastern Europe and Russia that allowed the SS death squads who followed to massacre so many civilians. Wehrmacht soldiers also co-operated with the SS and carried out war crimes themselves.

Another myth that took root in Germany after the war is that most Germans were unaware of the Holocaust and other atrocities while they were taking place. This too is inaccurate, says Pfeiffer. Soldiers at the front would have known, he says. “There were 18 million German soldiers serving in the Wehrmacht during the war; it’s hardly believable that no one told what they had seen.”

Both Hans and Edith died in 2006, before Pfeiffer published his book. Hans did read one of Pfeiffer’s university essays about German army war crimes. He was initially indignant. Weeks later, however, he told Pfeiffer: “I thought about it a lot. And there’s some truth to it.”

“The generation is dying out,” says Pfeiffer, speaking of Germans who lived through the war. “Facing their own responsibility still seems to be very, very hard. It’s a complex process of shame, suppression, and guilt. I think if the war generation immediately after 1945 really had faced what Germany had done, a collective breakdown would have paralyzed the whole country. So it was necessary to remain silent. But of course this was a horror for the victims and the postwar generation.”

Pfeiffer’s research didn’t change the way he felt about his grandparents. “I never questioned my love,” he says. “I neither wanted to accuse them, nor clear them of involvement. I already knew they had participated, so it was no surprise to me to find out about their enthusiasm.” He admits he doesn’t know how he would have reacted had he been in their shoes. “We shouldn’t claim that we would have behaved better or that we would have resisted. In certain situations everyone can do or support evil things. The Germans weren’t all bad, and the perpetrators weren’t all sick monsters. That explanation is too easy.”