More than monuments: A look at America's Confederate symbols

From bridges and roads to parks and military bases, symbols of the Confederacy permeate many parts of American life

Protesters hold a sign during a rally to take down the Confederate flag at the South Carolina Statehouse, Tuesday, June 23, 2015, in Columbia, S.C. (AP Photo/Rainier Ehrhardt)

In the wake of the violence in Charlottesville, Va., Confederate statues across the U.S. are being torn down, vandalized or relocated. While the conversation has focused mostly on these physical monuments, symbols of the Confederacy permeate many parts of American life.

Roads, schools, jails, parks and even holidays serve as reminders of the Civil War. In 2015, in the aftermath of the massacre at the Emanuel African Methodist Episcopal Church that left nine people dead, The Southern Poverty Law Center, an organization “dedicated to fighting hate and bigotry,” started to take stock of all the publicly funded Confederate symbols in the U.S. It compiled a database that includes more than 1,500 entries. Here’s a look at some of them in the database: 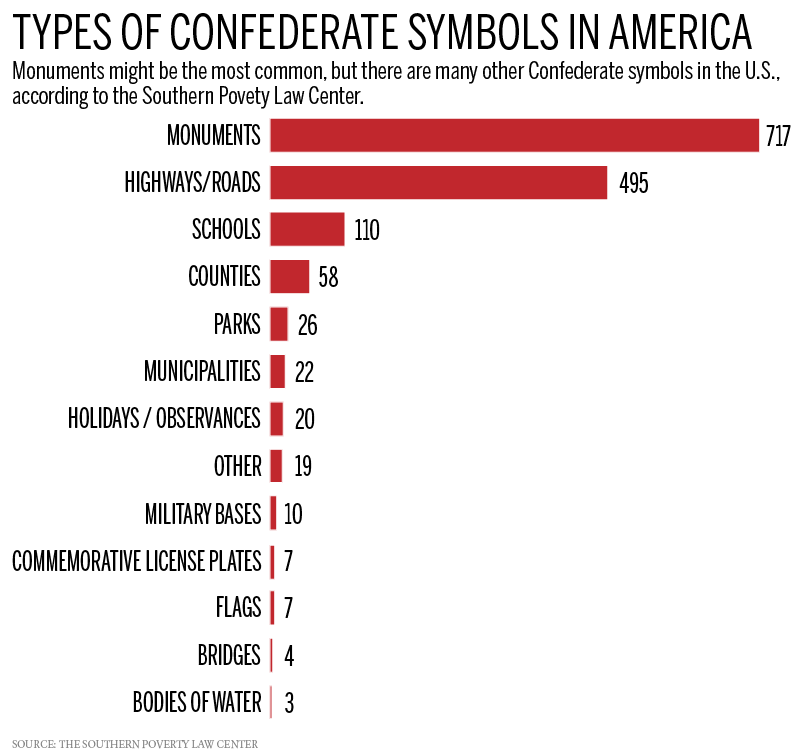 According to the database, there are nearly 500 street names that have a connection to the Confederacy. General Robert E. Lee has many streets in his name (as well as lanes, drives, roads and avenues). There’s the well-travelled Jefferson Davis Highway near the nation’s capital, as well as Jefferson Davis Avenue and Jefferson Davis Drive. In fact, the city of Alexandria, Va., alone has at least 31 streets directly connected to the Confederacy, and an additional 31 that might have links, according to the database and news reports.

More than 100 public schools are named after Confederate icons. Texas is home to nearly 40 of them, according to the database, from Stonewall Jackson Elementary School in Dallas, to Fort Davis High School in Fort Davis (named after Jefferson Davis) and Lee College in Baytown.

Entire counties in parts of the U.S. are named in honour of Confederate generals and soldiers. Take Bartow County, a small county in Georgia about an hour and a half outside of Atlanta, which is named in honour of Col. Francis S. Bartow, a Confederate leader and soldier who died during the First Battle of Manassas. His last words: “They have killed me, boys, but never give up.”

Similarly, there are more than 20 municipalities with names linked to the Confederacy. The City of Robert Lee in Texas, for example, boasts a population of nearly 1,200.

There are at least nine parks named Confederate Park, not to mention those named after particular generals and soldiers. Rebel State Historic Site in Louisiana was named after a Confederate soldier who  split from his unit and was killed by three Union cavalrymen. As local legend goes, a family buried the soldier and in 1962 residents started holding yearly memorial services in his honour.

There are seven different holidays dedicated to Robert E. Lee and at least 10 in celebration of the Confederacy generally. There are also specialty Confederate days, such as Confederate Flag Day in Little Rock, Ark., Confederate Decoration Day in Nashville, Tenn., and Confederate Heroes Day in Austin, Tex.

At the time the database was compiled, at least nine states allowed Confederate commemorative license plates. Since then, two states stopped allowing them—Virginia and Maryland (the only non-Confederate state to ever allow them). Texas was the first to stop offering them in 2015 after a legal battle that went all the way to the U.S. Supreme Court. At least seven states still offer the plates: Alabama, Georgia, Louisiana, Mississippi, North and South Carolina and Tennessee.

Photos of the Charleston church shooter Dylann Roof holding the Confederate flag sparked its removal from locations across the United States. But the flag hasn’t disappeared. It’s still part of other symbols and flying at symbolic locations in the South. The Alabama Coat of Arms, for example, still features the Confederate flag.

There are at least four bridges named after Confederate icons. Most notably, the Edmund Pettus Bridge in Selma, Ala. Pettus served as a U.S. senator for two terms, but was also a Confederate general and a leader within Alabama’s Ku Klux Klan. Ironically, the bridge was the starting point of the so-called Bloody Sunday march from Selma to Montgomery in support of black voting rights.