François Hollande has won the presidency, but now he has to stack the house in his favour 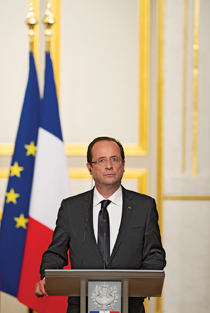 French President François Hollande is riding high in the polls, as one does so soon after victory over a reviled opponent. The French left waited 19 years for a president to call their own, and his reception recalls the adulation enjoyed by U.S. President Barack Obama after the George W. Bush years. Now, Hollande will try to translate his popularity into a parliamentary majority for his Socialist Party in voting that concludes June 17.

In France, voters pick a president, take a breather, then elect a parliament. Hollande, who has effectively been campaigning since his win over Nicolas Sarkozy on May 6, continues to cultivate an image of austere normalcy—a deliberate contrast to his ostentatious predecessor. He was sworn in alone, sporting a stern look on a drizzly day; there were no foreign heads of state, nor even his children or partner. He soon cut his own salary, and that of cabinet, by 30 per cent. Where possible, he travels by train. His motorcade reportedly obeys traffic lights. He wishes to be, in short, a reassuring bore.

There is socialist substance beyond the symbolism. He has already lowered the retirement age to 60 from 62 for certain workers, partly unravelling Sarkozy’s hard-fought reform in 2010. This to the delight of some 110,000 workers expected to take advantage of the change in the coming year, at a cost of over a billion euros in 2013 and up to three billion euros per year by 2017. Hollande is also moving to shrink the salaries of heads of public corporations, and sticking to his pledge to pull French troops out of Afghanistan by the end of the year, two years ahead of schedule.

“Almost every French president enjoys a honeymoon of about six months,” says Martial Foucault, a professor at the Université de Montreal who specializes in French politics. “The question is what happens after elections, when he tries to pass concrete policies.” The bulk of Hollande’s promises will hinge on who controls the new parliament. Projections suggest that his Socialist Party will win the most seats, but they may still have to rely on the support of more extreme leftist parties to pass their legislation.

Hollande has proposed adding 60,000 teaching jobs and paying for them by increasing taxation on millionaires. As with most campaign talk, the numbers don’t quite add up. The proposed 75 per cent tax rate on France’s highest earners will only pay for a fraction of the costs projected for the new teaching staff.

“Mr. Normal,” as the French press has anointed him, eschews superlatives, but he faces big problems and high expectations. Unemployment is at a 12-year high of almost 10 per cent and rising, along with national debt. He has sold a majority of France on a vision of a more just and less unequal France. He will now have to try chasing this dream without aping the fiscal crises of debt-addled Italy, Greece and Spain.

Meanwhile, Hollande allows himself some less advertised exceptionalism. His motorcade was filmed by a journalist exceeding 170 km/h on the autoroute between Paris and Caen. No matter: Sarkozy was filmed doing the same last April, but he managed to crack 200 km/h.