It's Official: Kate is pregnant!

Not to brag, but our resident royal watcher predicted it last week 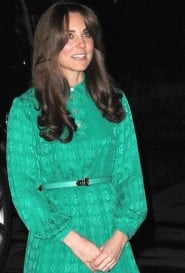 The Duchess was admitted this afternoon to King Edward VII Hospital in Central London with Hyperemesis Gravidarum.

As the pregnancy is in its very early stages, Her Royal Highness is expected to stay in hospital for several days and will require a period of rest thereafter.

The announcement ends speculation that started April 29, 2011—William and Kate’s wedding day. Last week she was wearing noticeably looser clothes. Well, looser for a woman known for form-fitting outfits. As I said last week— “Is Kate pregnant? Check out her belts.”