Paul Wells: The Vancouver conference on peace in the Korean peninsula was no meeting of Polyannas looking for any excuse to make nice with our North Korean friends 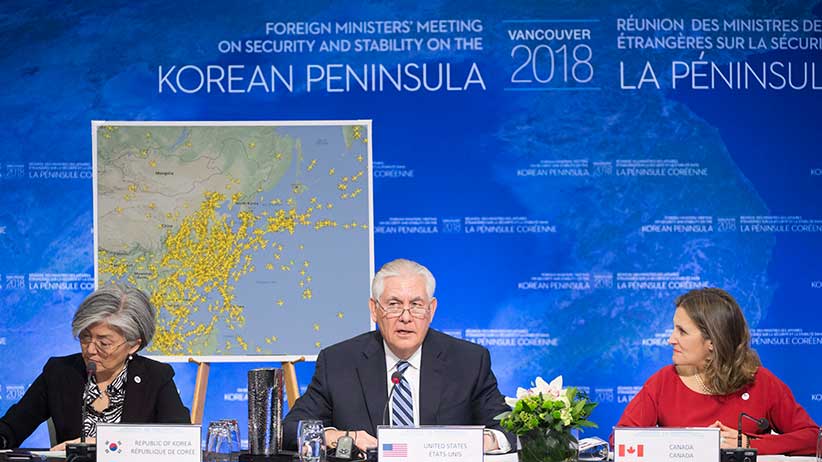 Minister of Foreign Affairs, Chrystia Freeland, right, and Korean Foreign Affairs Minister Kang Kyung-wha, listen as Secretary of State for the United States, Rex Tillerson speaks at the opening remarks of the meeting on Security and Stability on the Korean Peninsula in Vancouver, B.C., Tuesday, Jan. 16, 2018. THE CANADIAN PRESS/Jonathan Hayward

Chrystia Freeland has become Canada’s—and on some days the world’s—minister of long shots. When she’s not preparing for a peacekeeping mission in Ukraine that’s hard to imagine, she’s preparing for a diplomatic breakthrough with North Korea that’s hard to imagine. It is hard to blame her: Better is always possible, as someone once said, and for the improbable to become real it must first be imagined.

So while Freeland’s one-day conference in Vancouver on peace in the Korean peninsula, co-hosted with the United States secretary of state Rex Tillerson (she calls him “Rex,” he calls her “Foreign Minister Freeland”), is open to all kinds of criticism—there are no North Koreans present, nor anyone from China or Russia, and there is in fact nothing you could charitably call a plan for getting back to a negotiating table—it’s probably all still worth doing. Better to jaw jaw than to war war, as someone once said.

It’s well known that Tillerson’s boss, President Donald Trump, holds diplomacy in dim view, and it’s widely suspected he is not fond of Tillerson either. You could almost hear a big prop clock ticking whenever Tillerson spoke, during the 37 minutes at the beginning of Tuesday’s meeting when reporters were permitted to listen before being escorted out. But what in life is perfect? As of today, Tillerson is still the secretary of state. Make hay while the sun shines, as someone once said.

Still, the circumstances made the proceedings strikingly gloomy. This was no meeting of Polyannas looking for any excuse to make nice with our North Korean friends. The frequency of North Korean missile tests and nuclear test explosions—20 last year, the U.K.’s Boris Johnson told his colleagues—makes the country a present threat to its neighbours. Of the five ministers who spoke at the opening session, every one called strongly for continued and reinforced sanctions to starve North Korea to the bargaining table.

Freeland set the tone. She noted the 206,000 Canadians of Korean descent, many of them in her own Toronto riding of University–Rosedale. She welcomed last week’s announcement of military-to-military talks between North and South Korea, and of North Korean participation in the Pyeongchang Olympics. “These are encouraging signals.”

WATCH: Canada and partners tell North Korea to give up nuclear weapons

You could hear the “but” coming. “But let me be clear: no true progress can be made in addressing instability in the Korean Peninsula until North Korea commits to changing course and verifiably and irreversibly abandoning all its weapons of mass destruction.”

Tillerson concurred. He brought a chart showing the density of commercial air traffic over Korea and the surrounding region, and argued that North Korean tests endanger that traffic. “We must increase the cost of the regime’s behaviour to the point that North Korea comes to the table for credible negotiations,” he said.

If anything, Taro Kono, Japan’s foreign minister, was more hawkish. “Some” are taking North Korea’s Olympic overture as a sign that sanctions should be loosened, Kono said. That’s “too naive,” he said.

READ: The case for using military force against North Korea

“I think North Korea wants to buy some time to continue their nuclear and missile programs. They simply want to get something out of this dialogue. I would therefore argue that this recognition should be the starting point of today’s discussion. Secondly, we should judge [North Korea’s] intention in terms of what they are actually doing, not in terms of what we hope they are doing.”

What to make of Kim Jong-un’s apparent overtures to South Korea and the rest of the world? “Number one: They must be hoping to get sanctions lifted by some countries,” Kono said. “Number two: They must be attempting to obtain financial assistance in whatever form, exploiting the goodwill of others. Number three: They must also be hoping that the military exercises between the United States and the [South Korean] military be cancelled. Number four: they must be hoping to drive a wedge between tough countries and those that are not so tough.”

If anyone thought South Korea might be one of those “countries that are not so tough,” the country’s foreign minister, Kang Kyung-wha, was quick to disabuse them. Kang opened by welcoming the North’s Olympic overture, but pivoted as neatly as Freeland had: “Despite these overtures to improve relations with the south, North Korea has yet to show any intention to fulfill its international obligations regarding denuclearization.”

It was fascinating to watch Freeland while this was going on. The minister has no poker face. When Kang stopped lauding North Korea’s token overtures toward dialogue and reminded everyone its nuclear program continues unchecked, Freeland broke into a wide smile. When Kang added that the South was willing to accompany the North toward a brighter future—”if they make the right choice” by abandoning their nuclear program—Freeland looked like her day had been made.

On that note, the assembled foreign ministers kicked the reporters out and got down to brass tacks.