One picture, nearly a thousand words: Lessons from Iceland 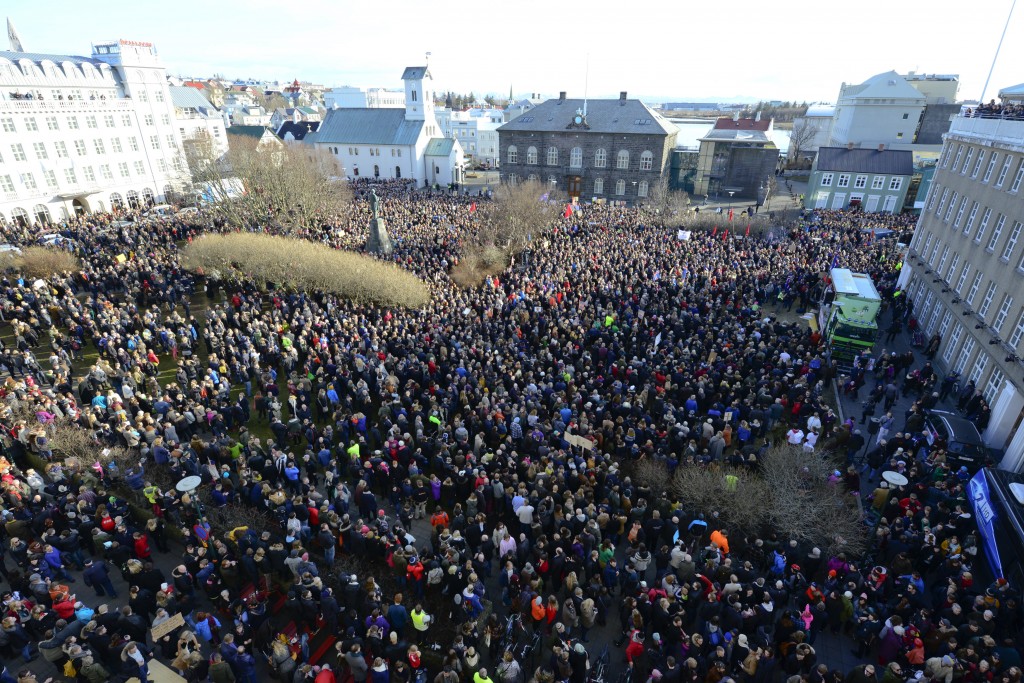 Ever since the news broke that Iceland’s (now former) prime minister, Sigmundur David Gunnlauggsson, holds a secret offshore account worth millions of dollars, Iceland has been in political turmoil. The revelation came via the Panama Papers, those records leaked from Panamanian law firm, Mossack Fonseca, which is, as the Guardian described it, “at the heart of the global offshore industry”.

On the surface, the immediate concern was the prime minister’s past joint ownership of an offshore shell company. More specifically, the problem is that he’d sold his stake in that company for a dollar to his wife, and co-owner, in 2009, rather than disclose it to the people of Iceland. Even more specifically, the problem was that the company, Wintris, is a creditor to some of Iceland’s biggest banks, to the tune of about US$4.2 billion. In other words, it’s the very same kind of creditor that Gunnlaggsson has ostensibly railed against and upon which, as prime minister, he had sworn to get tough.

Gunnlauggsson stepped down as prime minister last Tuesday. His minister of fisheries and agriculture, Sigurður Ingi Jóhannsson, fills for his spot now. Jóhannsson also happens to be the vice-chairman of Gunnlauggsson’s ruling Progressive Party. Meanwhile, the upstart Pirate Party—a group of direct-democracy-loving, libertarian leftists—is polling at around 43 per cent. “It’s House of Cards stuff,” a friend from Iceland writes, describing the political drama and subsequent manoeuvring. A few hours later, he sends along video from the ongoing protests that have gripped central Reykjavik for the past few days. “It feels a bit like 2007-08.”

There are a number of ways in which people have described in detail how it happened that this small nation, which for generations was mostly known for geothermal hot springs and fishing, became a shock point for the biggest economic cluster bomb to hit the world in a century. And about how, if we’d looked properly, starting in about 2003, we might have seen Iceland as an early warning signal of massive speculation built on virtually nothing and of the extremes of an economic culture we in North America not only helped create, but had normalized.

A phrase from the era comes to mind again now: too big to fail. As it happened, in Iceland, when it came to banking, this didn’t apply. By the time the recession hit, Iceland’s banks were, as the Washington Post put it, “too-big-not-to-fail”. They had become so much bigger than the nation’s entire economy, the government had no choice but to let them fall. From our vantage point, where the bailouts came quick and fast, it was like watching an alternate universe get created just a few thousand kilometres away.

In the birthplace of too-big-to-fail last week, President Barack Obama called for international reform of tax codes in the wake of the Panama Papers. Americans then watched as Bernie Sanders and Donald Trump—two candidates emerging from the dust of the Great Recession’s fallout, and themselves no fans of offshore accounts—continued to race for nominations that appear destined to leave both the Democratic and Republican parties in relative shambles.

Across the Atlantic, a similar lingering sense of unfairness about post-recession economics coalesced around David Cameron, the Etonian-Oxbridge prime minister. The Panama Papers revealed that Cameron once held shares in an offshore trust set up by his wealthy father. It might not have caused much trouble had it not been for the fact that, like Gunnlauggsson, Cameron once opposed that sort of thing. There now are calls for his resignation and hints at a leadership review. Protesters marched on Downing Street this past weekend.

There are theories that Cameron may be finished as prime minister. There are also some who now question his position at the head of a campaign to keep Britain in the European Union that will culminate with a vote this summer, and potentially mark an end of sorts for perhaps the greatest postwar experiment of all.

China, fresh from its own recent stock market crash, censored discussion of the Panama Papers. In Russia, where a weakened economy is yet again contracting thanks in part to falling global oil prices and international sanctions, the Panama Papers were dismissed as anti-Putin propaganda from the West.

And so, here is a picture of a few thousand people in a square in Reykjavik in the cool early April air last week, all facing a small stage set up on a truck trailer. We see them, as we have for a while now perhaps, as outsiders and from a distance. But it feels as if we are maybe closer to them than ever. Or that we have caught up with them. As if our universes finally swung back together again suddenly, on the other side of that skewed timeline that veered off sometime around 2009. And that in the interim separation we have all begun to recognize what the financial system they adopted taught them, what they guessed all along, and what they still know as they stand in that square: that nothing is too big to fail.