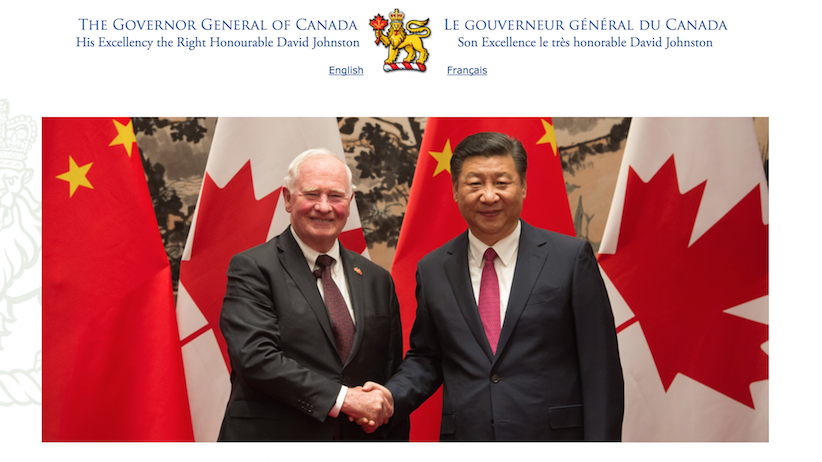 It would be hard to imagine a more obscene display of Canada’s slavish relationship with China’s depraved Communist Party regime: The very moment imprisoned democracy activist and Nobel Peace laureate Liu Xiaobo died under heavy guard on a hospital bed in the northeast city of Shenyang on Thursday, a beaming Governor General David Johnston was posing for photographs at the opulent Diaoyutai State Guesthouse in Beijing, shaking hands with Chinese tyrant Xi Jinping, Liu’s jailer, and tormentor.

It was all so very chummy.

The 61-year-old Liu, known worldwide as China’s Nelson Mandela, was in the eighth year of an 11-year sentence for having signed a manifesto pleading for free speech, the rule of law and a multi-party democracy. Liu’s liver cancer had oddly gone undetected in his monthly “checkups” at the Jinzhou Prison in Liaoning until May 31, when effective treatment was too late. Liu was far and away the best known among China’s thousands of prisoners of conscience. He had been slipping towards death for weeks.

The European Union and the U.S. State Department had tabled humanitarian appeals with President Xi directly, begging him to allow Liu to leave China for proper medical care abroad. The appeals were denied. The German and American physicians who were finally permitted to visit Liu declared him fit to travel, but the authorities refused to let Liu leave the country.

Liu’s death marks the first time a Nobel peace prize winner has died behind bars since the pacifist Carl von Ossietzky died in a Nazi concentration camp in 1938.

While every courtesy was being shown Johnston and the Canadian delegation in Beijing on Thursday—Small Business and Tourism Minister Bardish Chagger and NDP leader Tom Mulcair were among the Canadian politicians and officials attending dinner with Xi Thursday evening—the Chinese Communist Party’s vast propaganda and censorship apparatus roared into high gear.

China’s heavily-policed news media were permitted to publish only the most perfunctory authorized statements about Liu’s death. Liu’s friends and supporters were sternly warned that no public funeral or memorial would be tolerated. Any Chinese citizen who may have heard rumours of Liu’s failing health found their searches on the 250-million-user Sina Weibo microblog blocked by the message: “According to relevant laws and policies, results for ‘Liu Xiaobo’ cannot be displayed.”

The Chinese foreign ministry’s transcripts of news briefings have been scrubbed of all the questions international journalists have been asking about Liu, but German Foreign Minister Sigmar Gabriel is demanding answers: “China now has the responsibility to quickly, transparently and plausibly answer the question of whether the cancer could not have been identified much earlier.” Berit Reiss-Andersen, Chair of the Norwegian Nobel Committee, said it was “deeply disturbing” that Liu was denied proper medical care before he became terminally ill, adding: “The Chinese Government bears a heavy responsibility for his premature death.”

On Wednesday, Canada’s ambassador to China, the former cabinet minister John McCallum, claimed to have “repeatedly expressed” Canada’s concerns about Liu’s health in conversations with Chinese authorities. In the hours before Liu’s death on Thursday, in a meeting with Beijing’s Communist Party Secretary, McCallum pleaded: “We have to sell Canadian people that stronger ties with China is a good thing. And I am convinced that they are.”

In Ottawa, Foreign Affairs Minister Chrystia Freeland offered a heartfelt but otherwise anodyne official statement expressing sadness at the news of Liu’s death, referring only obliquely to Liu having been “denied the medical treatment he requested.” Freeland lauded Liu as “a passionate writer, speaker and campaigner for political and social change.”

READ MORE: How America could spark an economic war with China

Liu’s widow, Liu Xia, appears to have been taken into custody. Placed under house arrest when her husband was found guilty of “subverting state power” on Christmas Day, 2009, Liu Xia has gone missing, friends of the family report. Germany, the United Kingdom, France, the United States, the European Union and the UN High Commissioner for Human Rights are issuing appeals for Liu Xia’s release, so she can leave China. In Freeland’s statement, Liu Xia, “a tremendous symbol of courage and poise,”is only mentioned as having been subjected to house arrest.

There is now no practical distinction anymore between the goals of the federal government, corporate Canada’s China trade lobby, and China’s foreign trade bureaucracy. If it all didn’t depend entirely on the systematic violation of solemn international covenants on human rights, democratic rights, workers rights and the Beijing police state’s savage oppression and exploitation of more than a billion people, it would be laughable.

Carla Qualtrough, Minister of Sport and Persons with Disabilities, was bubbling in Beijing about Canada’s opportunity to “advance the agenda for people with disabilities” in China’s 2022 Olympics and Paralympics, a project that also presented China with the opportunity to engage in sports diplomacy and benefit from Canadians’ familiarity with ice and snow.

Shortly before Liu’s death on Thursday, Governor General Johnston was at the Beijing Hospital to deliver an effervescent speech at a “Canada-China symposium on senior care.” There was much praise for a memorandum of understanding between the Beijing Hospital and the Toronto-headquartered Baycrest Health Sciences, and for a commercial agreement between Baycrest and Zhonghong Zhuoye Group to build an “elder care facility” in southern China.

Johnston made no mention of the federal government’s inexplicable Investment Canada Act approval of the billion-dollar takeover of the Canadian seniors care home chain Retirement Concepts by the Anbang Insurance Group, a Chinese real-estate giant mainly owned by a complex maze of shell companies.

READ MORE: Is war between America and China inevitable?

Until a few weeks ago, Anbang was run by Wu Xiaohui, the billionaire husband of former Chinese supreme leader Deng Xiaoping’s granddaughter. On June 8, Wu Xiaohui was whisked away from Anbang’s corporate offices by Beijing’s anti-corruption police. He immediately stepped down from his post as Anbang’s chairman and hasn’t been heard from since. But Anbang remains in good standing with the federal government, and of course with the Canada China Business Council.

Anbang is listed as one of the Canada China Business Council’s 13 “benefactor” corporations, a status that entitles the Chinese behemoth to “front-of-the-line member-benefits” along with such well-connected firms as the Power Corporation of Canada, Huawei Technologies and Bombardier.

Among the Canada China Business Council’s directors for 2017 is David Hartman, Executive Director of the Greater China Division of the federal uber-ministry Global Affairs Canada, and of course a senior member of Johnston’s China delegation this week.

It’s all so disgustingly chummy.