Partnering with Coke for the greater good?

Claire Ward is a former associate editor at Maclean’s and is pursuing a Master’s in news and documentary at New York University. She is blogging from Zambia, where she is filming The Cola Road, a documentary that follows the launch of the first aid program that aims to use Coca-Cola’s distribution network to deliver medicines to the remotest corners of the developing world. Check out more updates from The Cola Road on Facebook at: www.facebook.com/TheColaRoad or Twitter at:www.twitter.com/TheColaRoad. Or follow Claire on Twitter @thementalward

As anyone in marketing will tell you, branding can make or break a product. And branding, in ColaLife’s case, has caused a bit of controversy — while the charity isn’t funded or coordinated by Coca-Cola, its nominal association with the Coke name, its brand colours (the website’s dominant hue is Coke-red) and its general chumminess with the soft drink company have raised eyebrows in the health sector. On the one hand, the relationship provides a practical way for ColaLife to deliver its medicines and share supply chain knowledge, not to mention raise its public profile; but on the other hand, the charity with a health mission appears to be dealing with the corporation that in large part makes its profits selling sugary, unhealthy soft drinks.

Indeed, in an online forum entitled “ColaLife or ColaDeath,” water and sanitation expert Cor Dietvorst questions whether it is appropriate for ColaLife to be nominally associated with the beverage, when one of its key ingredients, high-fructose corn syrup, has been linked with numerous health problems in the developed and developing world alike. He points out that the World Health Organization estimates 80 per cent of deaths in developing countries are now attributable to non communicable diseases (NCDs), and refers to a report noting that the poor are increasingly exposed to alcohol, tobacco and unhealthy diets, while they continue to have limited access to “preventive and curative services.”

Dietvorst and ColaLife founder Simon Berry had a polite and public back-and-forth online after he published the forum but Dietvorst still stands by his criticism. “I think if you’re really concerned with child health, then you should have principles about who you partner with,” he says over Skype from The Hague, referring to what he sees as a slippery slope. “Would you partner with a company in the tobacco industry or the alcohol industry to do the same thing?”

Dr. Yoni Freedhoff, Assistant Professor in Family Medicine at the University of Ottawa, is also an outspoken opponent of health organizations partnering with food companies. When I called him for comment, Freedhoff had already heard about ColaLife through the health sector grapevine and was planning to blog about it himself. “It’s a question of whether the benefits justify the risks,” he says. “Partnerships benefit Coca-Cola, both in terms of improving brand image, brand polish, and in some cases helping Coca-Cola to defend or avoid criticism or legislation that might hurt their business.” Coke’s recent outcry at New York City Mayor Bloomberg’s attempt to ban large soft drinks comes to mind. But, he concludes, “if the best way to get medicine to rural Africa is through Coca-Cola, then so be it.” 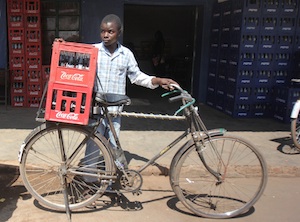 That final thought appears to be the sentiment that ColaLife is banking on — and its founders hope to demonstrate that, like it or not, partnering with Coke is possibly the fastest way to get oral rehydration salts into the hands of caregivers in their homes.

“There were worse options,” says Dr. Joseph Kasonde, Zambia’s Minister of Health. “They could have chosen beer, for example.” Dr. Kasonde’s matter-of-fact response to the potential controversy reflects his ministry’s current priorities: access to healthcare and public-private partnerships. “You will find Coca-Cola in any village, at any time, in the course of the year,” he says. “But you’ll not find medicines. What’s the difference? There is something there to learn from.”

Still, the very name ‘ColaLife’ conjures up an unavoidable association with the soft drink company and has critics wondering whether this is going to benefit Coca-Cola’s bottom line more than rural Africa’s children. In my experience of ColaLife’s trial run, however, the connection to Coca-Cola isn’t necessarily obvious to the consumer at the end of the line — you don’t have to buy Coke to get an Aidpod. In fact, even retailers don’t have to buy Coca-Cola to purchase the aid packages from wholesalers.

On the global scale, the project’s marketing has undoubtedly had the side effect of creating warm and fuzzy feelings around Coca-Cola. Many of ColaLife’s media gallery includes hero shots of Coke crates stuffed with Aidpods, next to photos of smiling African children. But the founders stress that they’re not promoting Coke. “We are piggybacking on their successes,” says Jane Berry, business development director of ColaLife and wife of founder Simon, “and hopefully diverting some of their expertise into the public good.” “And they’re on board with that,” she adds. “It’s the way they’re going with their corporate social responsibility anyway.” Indeed, Coke has expressed support for the project and indicated it will follow the trial closely to determine potential to expand the partnership beyond Zambia. 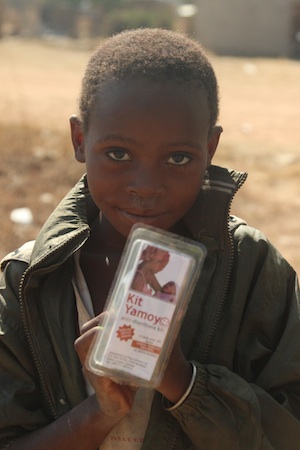 The question of whether the end justifies the means has come back again and again during the production of my documentary the Cola Road — but frankly, the criticism tends to come from the mouths of privileged, educated outsiders. Bertina Hamunene, a 40-year-old single mother of seven who works at a health centre in the rural province of Kalomo, had a different perspective. With no doctors and just two nurses on staff and stocks of oral rehydration salts often running out, diarrhea, she said, “is a killer.” She recalled a recent death—a 6-month-old with severe dehydration caused by diarrhea—who died under her watch. We discussed the ColaLife trial and the fact that ORS would soon be available in local shops, and I mentioned that Coca-Cola crates could be used for deliveries. She was pleased. Her only concern was that the deliveries were consistent.

Whether or not principled Westerners like it, this particular partnership is being welcomed in Zambia, something the country’s health minister has made clear. The numbers make the case: One in eight children die from dehydration caused by diarrhea, and that is after over 30 years of foreign aid efforts. From what I saw on the ground, ColaLife is just showing some healthy pragmatism and trying to get things done.

Next on the Cola Road blog: Stay tuned for Claire’s documentary video on ColaLife’s trial run!