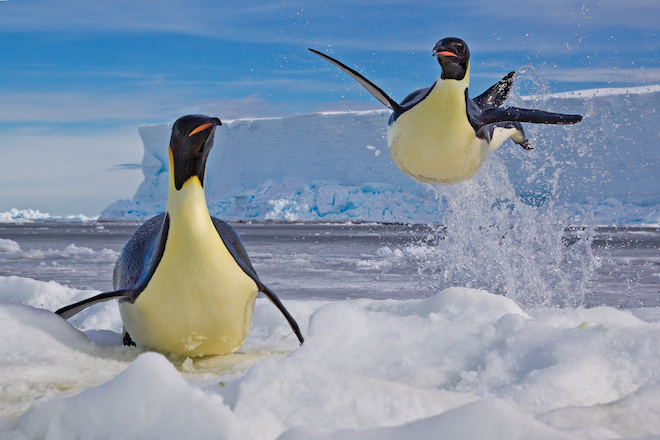 Award-winning photographer Paul Nicklen, the only Canadian on National Geographic magazine’s photojournalist roster, was born on a farm outside Tisdale, Sask., and now lives on Vancouver Island. But he spent 42 of his 45 years living in Canada’s three northern territories, and it was there, particularly during three boyhood years in the tiny Baffin Island community of Kimmirut (pop. 500), that Nicklen became an artist and a polar obsessive. “I was surrounded by an incredibly stunning visual landscape,” he recalls. “It was like being immersed inside a three-dimensional painting all day long, with the light, especially the winter light, the subtle hues across the ice, the aurora borealis. I would crawl up behind town in Kimmirut and spend the whole day, at minus 10, just sitting there, watching clouds form above the sea ice. With a 40-foot tide, you’d see the ice coming up like an elevator and then falling 40 feet again, all these beautiful visuals.”

Nicklen’s love of polar ecosystems, “beautiful creatures that rely on healthy ice,” has more recently sent him to Antarctica, where the differences in animal attitudes, rather than animal species, made his work entirely different than what he did in the North. “In the Arctic, everything is hunted, everything is scared, everything has its flight response—you might wait three weeks to get a great shot of a polar bear—so you’re always trying to work out different stealth scenarios. It took me eight years before I could even get close to narwhals. Had to buy that ultralight airplane on floats and live on the sea ice for three months, blew an engine, crashed it, fixed it, flew back out, all to have two good hours of shooting and, that night, I fell through the ice, dislocated my shoulder and that shoot was over. Contrast that with Antarctica, where nothing is scared. It’s a different problem, when you have baby elephant seals that are 18 days old and 400 lb, trying to crawl on top of you because they miss their mom.”

The photographer might make light of the dangers of his work—“the only skill I really have is I’m better at freezing than anybody else in the photography world”—but he knows otherwise. “I’ve crashed two airplanes, I’ve ended up upside down in a lake, I’ve run out of air under the ice twice,” Nicklen says matter-of-factly. “Both times, I didn’t think I was going to make it, so you’re always pushing that fine line. The work I do—jump in the water with a leopard seal or being close to a polar bear—your gut is telling you not to do it. After you start surviving these encounters, you learn to ignore your gut, and sometimes you lose touch with reality, with common sense. That’s the only part that scares me.”

Not that Nicklen plans on retiring. Love and a sense of urgency drive him on, a gnawing worry over the rapid disappearance of the healthy ice that sustains the inhabitants, human and animal, of the polar regions. He wants people in the South to look, really look, while they still can. “The only emotion that’s more powerful than fear is hope, and I just keep trying to share that message, dig a little deeper into people’s consciences, into their hearts, to alter their behaviour. And I do see a shift in people, so I feel this incredible urgency. You know, I’ve gotta be working now.”