Pope Francis has an American problem

A U.S. trip will reveal the rift between him and his conservative bishops 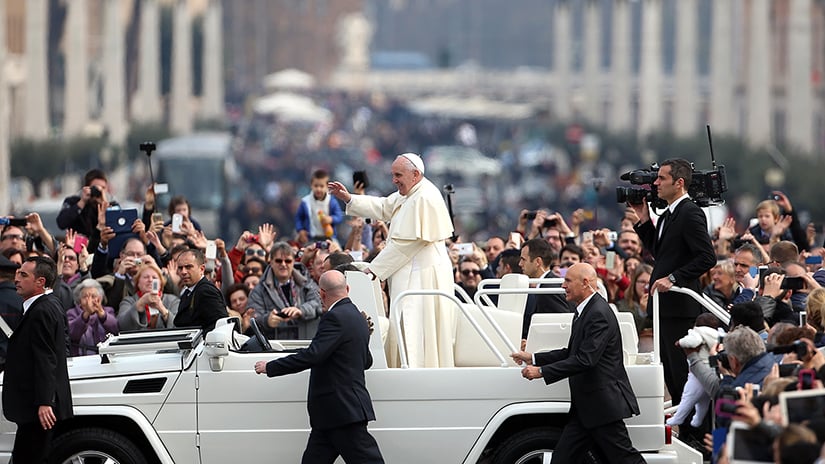 After ending 2014 with a successful visit to Turkey and his 78th birthday on Dec. 17, Pope Francis can look forward to a rapturous start to 2015. The Philippines, one of the world’s largest and most devout Catholic nations, is in such a fervour of anticipation for his Jan. 15 arrival that even the Marxist insurgents of the New People’s Army have declared a ceasefire. Francis may recall that welcome fondly when he embarks on the year’s other significant journey. The Pope’s first visit to the United States, to attend September’s World Meeting of Families gathering in Philadelphia—a massive Catholic event that, with Francis’s presence, may draw a million participants—will also take the pontiff to the heart of what theologian and Church historian Massimo Faggioli calls Francis’s “American problem.”

It’s less a single problem, Faggioli goes on to explain, than a linked complex of issues that might all come into play next fall. The American Church is perhaps the most important and wealthiest national church within Catholicism, he says, and certainly “the most important in the northern hemisphere, [where the U.S. is] the largest and least secular developed country.” It’s also, as much because it reflects the divisions within a polarized America as it does those within Catholicism, a militantly ideological church, both the world centre of Catholic feminism and the home of a hierarchy unafraid to take to the pulpit with politically conservative messages.

The American bishops, like Francis himself, defy conventional American left-right political categorization. They can seem like the Republican party at prayer in their opposition to the contraception provisions of President Barack Obama’s health care law or on the topic of same-sex marriage, but like militant Democrats on the question of sweeping amnesty for illegal immigrants—who are mostly Hispanic Catholics. They may not be as economically radical as Francis, but the Pope is not, as demonstrated by his recent robust championing of traditional marriage, very far removed from their social morality.

Yet the Pope and U.S. bishops part ways on tone, the Church’s overall focus and, perhaps, on more substantive issues, as well. Francis is determined to move the focus from the sexual morality issues that dominate relations between Catholicism and the secular world view to where he believes it should be: on the plight of the poor and marginalized.

But although Francis has made strides in sidelining American critics holding Vatican posts (traditionalist Cardinal Raymond Burke is no longer the papacy’s chief Church law expert) and placing supporters in key positions (the new archbishop of the important diocese of Chicago, Joseph Cupich, is one of the hierarchy’s most liberal members), the process of episcopal renewal is much slower than that of shifting office-holders. The majority of American bishops are still men appointed by Francis’s conservative predecessors, John Paul II and Benedict XVI. Their appointments, says Faggioli, an Italian-born scholar who now teaches at St. Thomas University in Minnesota, were in large part based on their “solidity” in the American culture wars, their commitment to “the Church as a strong fortress for traditional marriage and family.”

American cardinals were among Francis’s supporters when he was elected Pope in March 2013, Faggioli says. “But then he started surprising them—within minutes, actually. It was like 1958 again,” he adds, in reference to the election of John XXIII, who also became pope at age 76 and was widely expected to be a caretaker pontiff. Instead, John called the Second Vatican Council, which instituted a series of profound changes still working their way through the Catholic Church.

It’s not surprising, then, that American prelates were among the loudest opposing voices during the most dramatic point of Francis’s pontificate so far. At last October’s preliminary bishops’ synod on pastoral approaches to marriage and family, a mid-meeting draft report sparked worldwide attention when it seemed to herald a new Church openness to homosexuality. Amid unheard-of open debate, conservatives voted down, though barely, the new language.

By now, it’s clear that the un-Vatican-like transparency that Francis allowed around the intra-Church debate troubles traditionalists as much, or more, than their close call. Recently retired Chicago archbishop Francis George, 77 and in the midst of experimental cancer treatment, gave an extraordinarily frank interview—taking advantage of the openness of Francis’s pontificate to denounce that very quality—to veteran American Vatican watcher John Allen. “Does he not realize the consequences of some of his statements or even some of his actions,” which have created expectations “he can’t possibly meet?” George asked of the Pope. “That’s one of the things I’d like to have the chance to ask him, if I ever get over there. Do you realize what has happened, just by that very phrase, ‘Who am I to judge?’ ”

Chances are, Francis does, which is the real fear of the conservatives. That’s the argument Garry Wills will make in March in The Future of the Catholic Church with Pope Francis, one of a slew of books American publishers are rushing into print. Wills—a Pulitzer Prize-winning historian, devout Catholic and fierce critic of the institutional Church—told Publishers Weekly in a pre-publication interview that Francis is clearly bent on real change. He will “ease off from the condemnations of contraception, divorce and homosexuality,” Wills predicts, not by fiat but “by encouraging bishops to move in new directions. Church authorities [will] rather let practices lapse than end them with formal decrees.”

On any ordinary papal visit to the U.S., if such a thing could exist given Francis’s enormous popularity with lay Catholics, all these sensitive issues might stay muted. But that won’t be possible in Philadelphia. Francis is coming to attend a gathering on the theme of Catholic marriage and family, just weeks before the final session of the synod on the same topic begins in Rome. Every papal word and gesture will be scrutinized as never before.