Pulling Lebanon back from the brink

The power vacuum left by the devastating explosion poses a danger, but also a glimmer of hope. Canada can help set the country on a path of renewal. 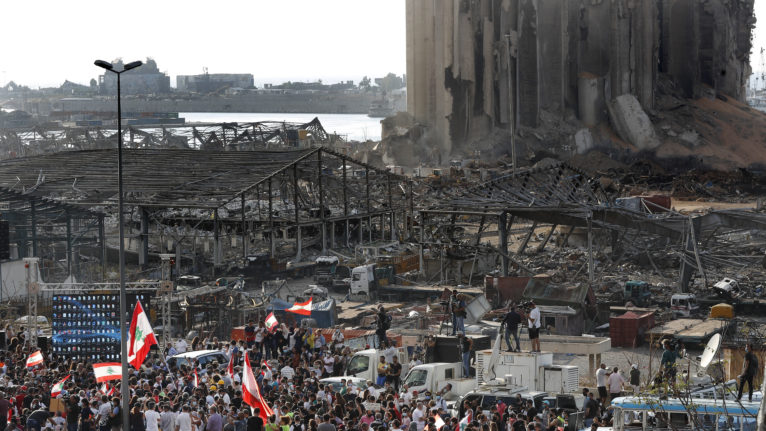 People gather Tuesday to honour victims of last week's explosion that killed more than 200 and devastated the city. (Hussein Malla/AP)

It’s a faint hope, a vanishingly fleeting possibility. Out of the still-smouldering ashes and rubble of the ancient and glorious Mediterranean city of Beirut, Lebanon might yet find its way back to its rightful place as a sovereign, functioning nation state. A lot hangs on that hope, because at the moment, Lebanon has no future. Well before the 2,750 tons of ammonium nitrate stored in Hangar 12 at Beirut’s port complex exploded last Tuesday, the country was already broken.

The outside chance is that global attention to the Beirut catastrophe—300,000 homeless, 7,000 injured, at least 200 people dead, dozens still missing—will at last focus the international community’s concerns on the plundering of the country and the misery its people have been enduring.

“Lebanon today is broke. The entire country has been picked clean by terrorists, criminals, elites, and the political class.” That’s the plainspoken assessment contained in an exhaustive 25,724-word analysis commissioned by the Foundation for Defense of Democracies (FDD) in Washington, D.C. and published, coincidentally, the very day of the explosion. “Amidst a global crisis, Lebanon is headed for a catastrophic meltdown to which there is no clear solution.”

Authored by the economist James Rickards—editor of Strategic Intelligence, author of three New York Times bestsellers and financial warfare consultant to the Central Intelligence Agency and the Pentagon—the analysis, titled “Crisis in Lebanon: Anatomy of a Financial Collapse,” depicts the directors of the Central Bank of Lebanon as key players in what Rickards calls a massive Ponzi scheme.

“The commercial banks are also insolvent, despite claims of having assets on deposit with the insolvent central bank. This is all accounting smoke and mirrors,” Rickards concludes. “No one can pay anyone, except in increasingly worthless local currency. Indeed, based on calculations presented in this report, Lebanon’s financial system stands to suffer aggregate gross losses of over $93 billion.”

The true losses, Rickards reckons are more likely on the order of $100 billion. By way of contrast, the biggest bailout ever authorized by the International Monetary Fund was its $57 billion arrangement with the government of Argentina two years ago. While the cost of rebuilding Beirut alone is estimated at $15 billion, last weekend’s international donor conference, convened by French president Emanuel Macron, managed only to raise pledges close to $400 million, for Beirut’s immediate humanitarian needs.

On Monday, Prime Minister Justin Trudeau equalled Macron’s contribution of roughly $50 million to the humanitarian effort, adding a Canadian matching-fund project—a federal dollar for every private dollar raised in donations to an emergency fund, up to $5 million.

This is all to the good, the Lebanese community activist Jad El Tal told me. A masters student at the Munk School of Global Affairs at the University of Toronto, El Tal helped organize a letter-writing campaign to Members of Parliament that quickly achieved much of what it was asking of Ottawa, at least as far as the organizers’ hopes for emergency humanitarian relief.

But much more than that, Canada should play a leading role in mobilizing international allies, humanitarian networks and human rights organizations in establishing an independent investigation into last Tuesday’s catastrophe. The Lebanese government cannot be trusted to explain why 2,750 tons of explosive ammonium nitrate was allowed to be stored in a hangar at Beirut’s port for the past six years, despite several warnings from port officials that the stockpile was a ticking time bomb, El Tal said.

Canada should play a role in Beirut’s longer-term reconstruction, as well, so long as funds are either kept out of the hands of the Lebanese government entirely or subjected to firm tracing and oversight mechanisms, El Tal said. The Lebanese political class is well known for siphoning foreign aid “to enrich themselves and engage in fraud, embezzlement, cronyism and flagrant corruption.”

RELATED: The U.S. was justified in killing Soleimani—but is it ready for what comes next?

Last week’s Beirut catastrophe re-ignited a mass protest movement that sprang up last October as the Lebanese economy slipped into a tailspin. After three years of gross mismanagement, the government of Saad Hariri fell last January. On Monday, following a near-insurrection in the streets of Beirut, the entire cabinet of Hariri’s successor, Hasan Diab, resigned.

The faint hope for Lebanon’s future rests mainly on Nawaf Salam, a judge at the International Court of Justice and a former Lebanese ambassador to the United Nations, taking up a caretaker role as interim prime minister in advance of new elections. Salam’s greatest obstacle, however, is Hezbollah, the internationally-designated terrorist organization that remains deeply embedded at all levels of Lebanon’s political establishment.

Even if the protest movement succeeded in forcing Lebanon’s deeply-compromised president, Michel Aoun, to name Salam as interim prime minister, nothing short of a revolutionary restructuring of Lebanon’s sectarian parliamentary system and the ouster of its criminal political class is likely to persuade the world’s democracies to commit to a proper Lebanese bailout. According to the FDD’s James Rickards, it’s just not going to happen, not without “extreme austerity, monetary and fiscal reform, legal reform, a complete reorganization of the banking system, and an end to money laundering.

“Given Lebanese political dysfunction and the significant role of Hezbollah in the political system, such reform is unlikely.”

El Tal agrees, but he says Lebanon’s corrupt elites can be marginalized and isolated, and Canada can make a direct contribution to that effort.  The 250,000-strong Lebanese-Canadian community should be expected to support federal measures to freeze the assets that corrupt Lebanese politicians have spirited away here in Canada, he said.

“We have the Victims of Corrupt Foreign Officials Act,” he said, referring to Canada’s “Magnitsky” law, named after the murdered Russian whistleblower Sergei Magnitsky. “In order to sustain pressure on the ruling elite, and to actually help the people in Lebanon, Canada has got to be committed to combating corruption in Lebanon, and to fighting for human rights abroad.

The Lebanese people, we do have the capacity to govern ourselves,” he said. “We’ve just got the wrong people controlling the government.”