Q&A: Meet the Canadian behind the Russian doping report

Lawyer Richard McLaren on how he put together his report, how we can learn from past mistakes, and why Canadians are a 'little smug' on doping 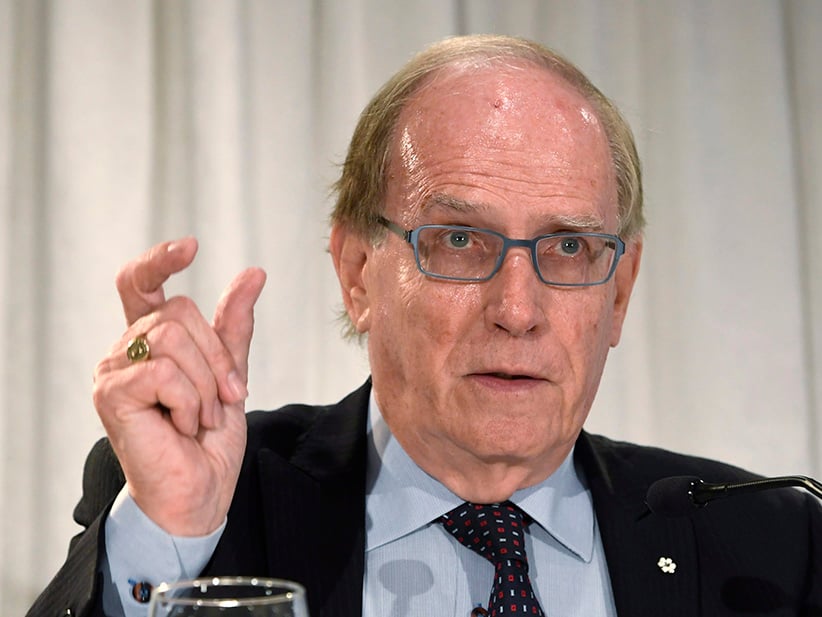 Canadian law professor Richard McLaren speaks at a news conference in Toronto on Monday, July 18, 2016 to present his findings into allegations of a state-backed doping conspiracy involving the 2014 Winter Olympics in Sochi. (Frank Gunn/CP)

At a downtown Toronto hotel this morning, lawyer Richard McLaren announced that his investigation, commissioned by the World Anti-Doping Agency, found evidence of widespread state-sponsored doping among Russian athletes. McLaren’s 103-page report adds to the mountain of evidence growing over the past few months that Russian athletes cheated during the 2014 Sochi Winter Olympics. Russia’s track and field team has already been banned, the result of whistleblower accusations from Vitaly Stepanov, a former employee of the Russian anti-doping agency and his wife Yuliya, a world-class runner.

McLaren said that his evidence shows it’s not just track and field—”the vast majority of sports” are implicated. His report is already serving as a catalyst for those, including Canadian and U.S. anti-doping leaders, calling for a complete ban on Russian athletes at next month’s Rio Olympics. When not investigating cheating in international sport, McLaren works as a law professor at Western University. Maclean’s spoke with him Monday afternoon.

Q: What was your process in putting together this report?

A: It’s a combination of interviews, sourcing the data, obtaining the data, getting hard drives, reviving data documentation, searching all of that material, conducting forensic work and laboratory analytic work, to corroborate what people say so that you have cross-corroboration and a certain amount of cyberanalysis as well. That’s the basic technique and sources.

Q: When did you first start investigating cheating in sports?

A: The first one would have been for the United States Olympic Committee involving C.J. Hunter, who was a shot putter on the U.S. track and field team who was married to Marion Jones. It was alleged that the U.S. Track and Field organization was covering up doping cases in the United States and I worked on that project for approximately a year. We reported in July 2001.

Q: You founded the Sports Dispute Resolution Centre for Canada. What motivated you to build a Canadian body?

A: I was disappointed and upset by the way in which sport administrators were making decisions about selection of athletes and choosing people to go to the games, not running proper inquiries within the sport. At the time Denis Coderre was the minister of sport. With him I worked on a scheme where you would have a system of arbitration so that athletes would have an opportunity to go through an independent system of adjudication. Over time I thought that would change the behaviour of the sports administrators and now, 15 years later, it’s definitely done so.

Q: Is there still work to be done in Canada or do we have a good system at this point?

A: I think we’re a little smug. We think it’s pretty good. I don’t have any direct indication that it’s not working properly but I think that there are probably some difficulties in the system, as there are in many countries. I don’t think Canada can be excluded from that group.

Q: In all of these disputes that you’ve worked on, do they tend to result in positive change or are there any places where you keep investigating and there seems to really be no amelioration?

A: Every one of them that I’ve been involved in has brought about significant positive change. I worked with Sen. Mitchell on the Major League Baseball inquiry into steroids in baseball and there was significant change. The independent commission, the three of us under the direction of Dick Pound, there was immediate reaction. My report today has also generated immediate reaction. I haven’t had the chance to study what the IOC [International Olympic Committee] or WADA [World Anti-Doping Agency] have said yet, I just heard from various newscasters about it.

The one experience I’ve had, I did an investigation of doping control officers in Russia in 2008-09 who were alleged to be corrupted. We didn’t find much evidence of corruption and so there was never the changes that we recommended in that investigation, those changes did not get implemented. Having just done the work that I’ve done most recently, they continue to be part of the problem which we didn’t identify at the time but can identify now. So that one didn’t work so well.

A: Exactly. It takes a lot of experience and know-how, and not just technically as an investigator or as a person running the team, but in understanding what you should be looking for and how to evaluate it, particularly in situations that come out of cultures you’re not necessarily familiar with and you have to learn about. I think the mistakes in that one were made by the investigative team, which I have to take the blame for; I was in charge. But I learned from those and then I was able to bring those to the benefit of the two recent commissions that I’ve been involved in.

Q: What do you think is going to happen based on your report?

A: I’m waiting, watching the reactions. Soon we’ll know exactly what the reactions are and I’m not going to speculate. I’ll wait and see how that all unfolds.