Take two: the Queen's state dinner dress gets a makeover 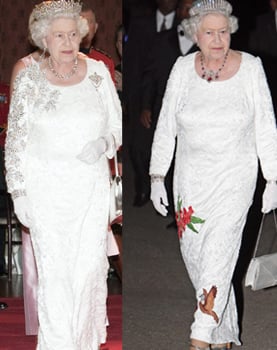 Monday’s gown worn by Queen Elizabeth II at the official government dinner is glittering example of sartorial scrimping by the sovereign. The embroidered maple leaves that adorn the heavily beaded white evening dress are temporary motifs to honour Canada. The 36 interlocking leaves took two weeks to create and were designed by the Queen’s dresser Angela Kelly—who also made many of the outfits and hats seen on this tour—to be unstitched so other national motifs could be added on future trips. The dress, with its detachable emblems, was unveiled at a formal dinner in Trinidad and Tobago in November 2009. At that time, embroidered versions of the national flower as well as the official birds of the islands—the scarlet ibis as well as the cocrico—were added to the bottom of the gown.