Republicans once led the health care debate. What happened?

Republicans somehow decided the way to fix health care is to not fix it. 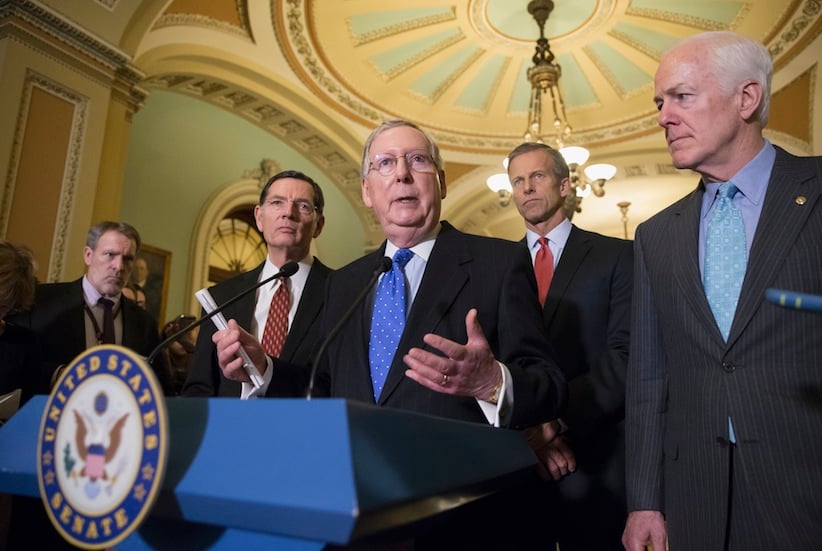 As Republican lawmakers head home to their districts for Independence Day, they leave their attempt to repeal and replace Obamacare stalled in the Senate. Senate Majority Leader Mitch McConnell will spend the holiday recess trying to figure out how to advance the measure, called the American Health Care Act (AHCA). Meanwhile, the throngs of protesters who have recently laid a peaceable siege to the Capitol will surely renew their efforts once the legislators return.

But beyond any backroom deals, and the Margaret Atwood cosplay currently ringing the Capitol grounds, there’s another story unfolding: Republicans have abandoned any pretence of creating a system of universal health care. Should they get their way on the AHCA, they’ll be leading the country in the opposite direction; independent estimates of the impact of the bill indicate that tens of millions of people who currently hold health insurance will be disenfranchised. After eight years of striving in fits and starts to provide a better alternative to Obamacare, Republicans have decided that the solution to the problem of universal health care is to not solve it. In doing so, they are creating a policy vacuum at the heart of their party, and erasing their own history of virtuously competing in this debate.

It may be difficult to remember, but Republicans have historically striven to reform the health care system, arguing with Democrats over the best policy but rarely the final goal. It’s not hard to divine their motivations. In terms of principle, the GOP always preferred to keep “socialized medicine” at bay with a “free market” solution. They had political interests as well. If the GOP could crack the issue, and get their product to market before Democrats, they would get credit for solving one of America’s biggest problems.

They made tangible process toward this target. In the years between defeating President Bill Clinton’s effort to enact a health care reform package and President Barack Obama’s success in doing so, conservatives germinated policy ideas in like-minded think tanks and then got those notions enacted. This is, in essence, the story of CommonwealthCare, the health care reform enacted by Massachusetts’ then-governor Mitt Romney in 2006. Underpinned by concepts conceived by the right-wing Heritage Foundation—whose scholars were on hand to take a victory lap at that measure’s signing ceremony—the bill later known as “RomneyCare” demonstrated that conservatives were major players in the health care policy debate. The bill went a long way to dispelling stereotypes that Republicans were mostly content to let the needful die on the streets.

RomneyCare created real opportunities for conservatives. It certainly opened doors for its namesake—the legislation’s passage heralded Mitt Romney’s entry into the 2008 Republican presidential primary. Had he prevailed in that competition and subsequently gone on to serve as president, it’s easy to imagine Romney seeking to implement his ideas nationwide. Republicans would have had an electoral mandate to do so, and success would have dealt a major setback to Democrats, who’ve long striven to be the party of health care reform.

Fate didn’t go in that direction. Obama won, seized the mandate for himself, and got his own plan enacted. It was the liberal president who was now keeping advocates of a single-payer system in check. This should have given the GOP room to maneuver. Instead, those Republicans who attempted to engaged in the debate soon found themselves casualties of a new order. Former Senator Robert Bennett (R-Utah), who teamed up with his Democratic Senate colleague Ron Wyden (D-Ore.) on a bipartisan alternative to Obamacare in 2009 was defeated in his ensuing Senate primary, his opponents principally motivated by Bennett’s attempts to work across the aisle. And after conservative writer David Frum publicly criticized Republicans for not being more eager participants in the debate, he was swiftly cast out of conservative circles.

MORE: Party or country? The Republicans choose a side

No one felt the effects of this nihilism more than Romney himself. After finally notching his party’s presidential nomination in 2012, he quickly found himself in the untenable position of having to simultaneously spearhead his party’s street fight against ObamaCare while also running away from his own accomplishments.

There was a popular notion that Obama had poached his ideas from RomneyCare. This thesis has been rebutted by both conservatives and liberals, but Romney was never permitted able to avail himself of these arguments. In fact, when Romney campaign adviser Andrea Saul made mere passing mention of the good that his most significant accomplishment had wrought, it touched off a massive pile-on from conservatives, accusing Saul of giving away the election.

What Romney was supposed to do in that situation? He’d already succeeded in reforming health care once. Was he supposed to come up with a second way of doing it? It’s not as if his own party had a ready-made solution he could run on. By this time, they’d spent three years endlessly promising, and failing to deliver, alternative plans.

Recently, the Republicans’ inability to get past tribal nihilism has truly hit new heights. What they plan to do, through the AHCA, will hit their own base with the lion’s share of adversity, creating a new health care regime that runs counter to what voters deep within Trump country say they want.

It’s not clear what happens, then, the morning after their bill passes (if it does). The GOP may end up consigning themselves to being institutionally incapable of reforming health care in a meaningful way. If it’s true that the best policies are born from a competitive debate in the marketplace of ideas, then it simply must be said that America is going to be worse off as a result.