Running out of royals?

The older Windsors take on far more annual duties than the younger set. But recent royal illnesses may put an end to that. 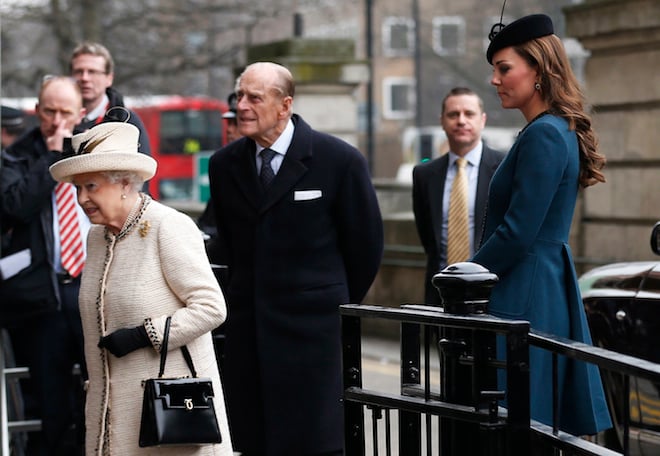 Recently the health of the older generation of royals has been under a microscope. First the Queen all but disappeared from view after she was admitted to hospital with gastroenteritis on March 4. Big public engagements were cancelled, including a trip to Italy, though she did continue with those that were in the safe confines of royal residences.

Finally, on Wednesday, she moved back into the limelight, going to the Baker Street Station of the London Underground for the 150th anniversary of the oldest subway system in the world.

Then today, Buckingham Palace confirmed that her cousin, HRH Prince Edward, duke of Kent, was admitted to hospital. He’d suffered a minor stroke, sources said. All of his engagements have been cancelled.

And that brings up a demographic time bomb placed at the heart of the Windsor team. For, according to Tim O’Donovan’s meticulous accounting of annual royal duties, members of the family undertook 4,470 engagements in 2012. And of those, 25 per cent were done by Windsors over the age of 76, including the Queen, Prince Philip, the duke of Kent and his sister, Princess Alexandra. Extend the group of royals to those age 60 and older and the number jumps to 3,019 or 67 per cent.

So at a time when other senior citizens are putting up their feet and relaxing, these nine Windsors polished off two-thirds of all the family’s work.

While the young royals—William, Kate and Harry—may be the bright, shiny faces of the future, right now they don’t do a lot of hospital openings or gala premieres. William (88 duties) and Harry (61) are both in the military while Kate, even before she got pregnant, was doing a very light load as she concentrated on settling into married life. In 2012 the 30-year-old undertook 111 engagements while the duke of Kent, 77, undertook 239 engagements–more than double Kate’s.

The illnesses of the Queen and duke of Kent are a signal that in the near future the number of engagements undertaken by the royal family is going to plummet.

And for a dynasty that needs to be seen to be believed, that’s got to be a worry.