To counter Moscow’s powerful state media apparatus, Kyiv wants to launch a television channel of its own 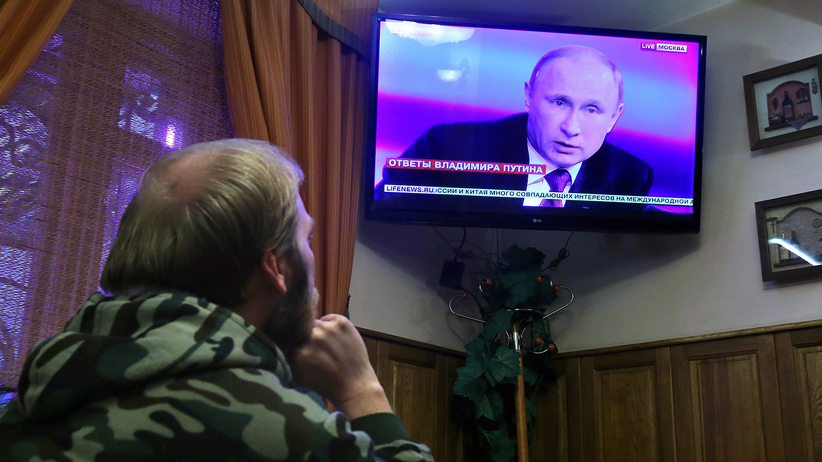 When an official Ukrainian contingent visited Washington late last year to lobby for American support, it came bearing gifts: photographic proof of Russian troops in Ukraine. The group, including two prominent military commanders-turned-MPs, presented the packet of images to U.S. Sen. Jim Inhofe, who, in turn, presented them to the Senate last month. There was only one problem: Two of the photos appeared to be from Russia’s war with Georgia in 2008. Reporters questioned the veracity of at least one other image.

Whether intentional or not, the move hinted at desperation. For 10 months, Russia has fuelled an armed insurgency in eastern Ukraine through a combination of state propaganda and covert military support. And it’s winning, a fact that’s left Kyiv desperate to fight back any way it can—not only on the ground, but in hearts and minds. The question has been: how?

The Kremlin never had this problem. After protesters in Kyiv toppled ex-president Viktor Yanukovych last year, Russia’s powerful state media apparatus painted the popular uprising as a “fascist” coup in round-the-clock broadcasts. Straddling the line between gross embellishment and outright lies, incendiary reports on television sowed panic among Russian-speaking viewers in Crimea that Ukraine’s new “nationalist” government would hunt them down. Russian television was the main source of information for the vast majority of Russian-speakers in Crimea and eastern Ukraine. (Later, many of these channels were banned from Ukrainian airwaves.)

For the Kremlin, media have been little For the Kremlin, media have been little more than a tool for stirring unrest, says Yevhen Fedchenko, head of the journalism school at the National University of Kyiv-Mohyla Academy. “It has nothing to do with journalism as we understand it,” he says. With more than 6,000 now dead, the conflict has mushroomed. But so has Kyiv’s appreciation for the power of information. Cue the ministry of information policy. Led by a former journalist and close ally of President Petro Poroshenko, it’s rolling out plans to coordinate the fight against Kremlin propaganda. So far, it’s taking a two-pronged approach. Last week, it launched an “information army” to counter pro-Russian online trolls and disinformation campaigns. Something of a cottage industry in the ongoing information war, trolls are widely despised for their prolific pro-Kremlin commentary on social networks.

In the offing is a state television channel dubbed Ukraine Tomorrow, a less-than-subtle response to Russia Today (now called RT), the generously funded state network that’s played a key role in broadcasting Moscow’s view to the rest of the world. RT, and most other state television networks, are known for their slick production values and often dramatic presentation. “They only have today,” the minister, Yuriy Stets, reportedly said at a recent briefing, “but we have the future.”

Mostly, though, the plans have been dismissed by critical Ukrainian journalists who see them as a clumsy attempt to copy Russia’s top-down model. When the ministry was unveiled last December, it was promptly dubbed the “ministry of truth” (a nod to George Orwell’s Nineteen Eighty-Four). Lesya Ganzha, a media reporter and editor in Kyiv, says there’s no need to effectively “duplicate” existing institutions, such as official press services. “With these instruments, [officials] can get their message across and help journalists do their jobs.”

But even these government press services are seen as part of the problem. One year after the uprising on Maidan, honest information from officials is still difficult to come by, especially regarding the war in the east. Last month, as rebels pushed government troops out of the strategic hub of Debaltseve, officials insisted the pullback was an orderly withdrawal. In reality, the troops—whose casualties the military also initially downplayed—were massacred as they fled frantically with little support, according to journalists on the ground.

Dubious claims and exaggerated casualty counts have been a favoured tactic for both sides in the war. But for Ukrainians who saw last year’s revolution as a moral victory, official attempts to sanitize or promote the war effort as a success, based on unverified information, are troubling. Many believe another government agency would only further muddy the picture. “If we start complaining about Russian propaganda,” says Fedchenko, “then the answer will be, ‘Well, look at what you’re doing.’ ”

Others believe ordinary Ukrainians are actually secondary targets for Kyiv’s information campaign. As the debate continues over whether to arm the country, the overarching goal, says Balazs Jarabik, non-resident scholar at the Carnegie Endowment for International Peace, is to keep the West on its side. “This is not about countering Russian propaganda,” he says. “This is about countering Russian propaganda in the West.” So far, neither the photograph fiasco in Washington nor any other credibility problems at home seem to have damaged Western support for Ukraine. That’s despite aggressive attempts by Russian media to exaggerate Ukraine’s political dysfunction.

But in Kyiv and elsewhere across the country, public discontent continues to stir over the slow pace of reforms and military defeats. While most observers agree another Maidan is unlikely, they say the authorities have done little to fulfill post-revolutionary expectations. Stets, the information minister, says his main task is to reinstate trust in the authorities. In a country whose population has never quite trusted its leaders, it will be an uphill battle.