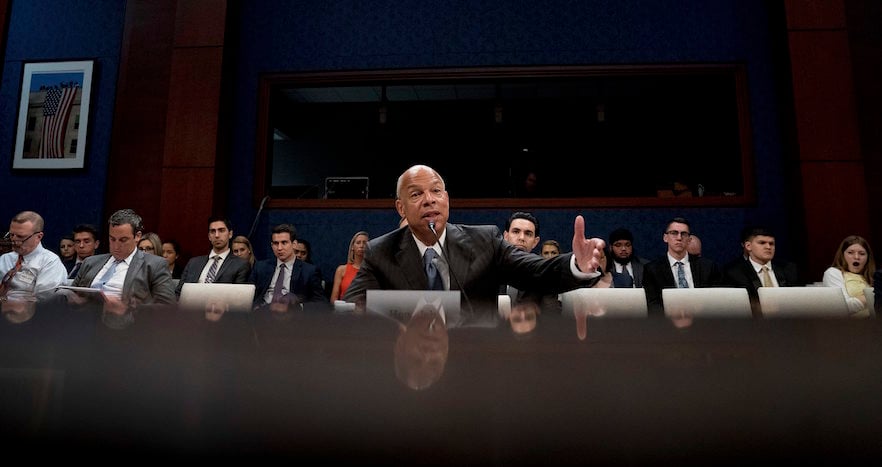 “Some KGB captain just got promoted to four-star general,” a Republican member of Congress chided Barack Obama’s Secretary of Homeland Security Wednesday, congratulating the Russian government for successfully hacking into the 2016 presidential election while misremembering that the dreaded Komitet Gosudarstvennoy Bezopasnosti was disbanded in 1991.

The ex-secretary, Jeh Johnson, meanwhile, counter-punched that one reason why the Russian spearfishing expedition was so effective was the refusal by the Democratic National Committee and dozens of state electoral officials to listen to him when he cried wolf, or, more precisely, bear.

Testifying as a civilian before the House of Representatives Permanent Select Committee on Intelligence long after the barn door closed on last year’s cyber-mischief, Johnson stated that it was “a fact, plain and simple,” that “in 2016 the Russian government, at the direction of Vladimir Putin himself, orchestrated cyberattacks on our nation for the purpose of influencing our election.”

But while the malevolent Muscovites were being excoriated on Capitol Hill—and while the Putin government was abruptly cancelling a scheduled meeting of a “senior-level working group” of Russian and U.S. officials that was established a few weeks ago—two members of the Trump cabinet were engaging in “direct and candid” and “philosophical-level discussions” at the State Department with the equally hacktivist Communist Chinese.

“We talked about how we are going to engage and live with each other for the next 40 years,” Secretary of State Rex Tillerson told reporters following a parley that included Secretary of Defense James (Mad Dog) Mattis, a member of the Chinese State Council, and the Chief of the Joint Staff Department of the People’s Liberation Army (PLA).

It was the PLA that was implicated in hacking of Pentagon computers in 2013, and it was cyber-crooks working for the Chinese government who stole more than four million sensitive files from the Office of Personnel Management in 2015.

Still, Mattis said Wednesday, “our nations do and can cooperate in mutually beneficial ways.” He announced a “mil-to-mil” exchange of officers to reduce tensions over North Korea, the South China Sea, and other flashpoints. “Competition between our two countries is bound to occur. Conflict is not inevitable.”

RELATED: The investigation into Donald Trump and Russia: FAQ

Tillerson described “a frank exchange of views” and stated that he “will not be shy” in confronting Beijing with its abuses of human rights, at the same hour that his own department was warning Moscow that the punitive economic sanctions re-ratified by Congress this week “didn’t just come out of nowhere.”

Back in the Capitol, Democrats and Republicans alike asked Johnson why Homeland Security and other federal agencies were unable to halt the Russian hacking as soon as they detected it, and why Obama himself did not make a public statement about it until after Donald Trump had been elected.

The witness hemmed about being hesitant lest he be seen as “compromising sources,” hawed that “many would criticize us for perhaps taking sides,” blamed an alphabet-soup of missed communication between the DHS, the FBI, and the DNC, and—most tellingly—hinted at Obama’s fear that, by announcing that the Russkies were indeed trying assiduously to tilt the election in Trump’s favour, he might give substance to The Donald’s full-throated and specious assertions that the election was being rigged against him.

Not only that, Johnson sighed, his own public outcry at Putin’s treachery landed with a thud on Oct. 7, the very same day that Trump’s notorious “grab ‘em by the pussy” audiotape was made public.

For the House, Johnson’s appearance was a chance to make up some ground in the celebrity-witness war against the Senate Intelligence Committee, which previously had landed fired FBI director James Comey, Attorney General Jeff Sessions, deputy AG Rod Rosenstein, and other trophy fish. Unlike the more secular Senate, the House hearing opened with a prayer for humility and temperance “in Jesus’s name” despite the fact that one of its members, Andre Carson of Indiana, is a Muslim and Adam Schiff, the head Democrat on the panel, is a Jew.

READ MORE: Who is Rod Rosenstein?

Johnson confessed that the FBI had learned weeks before his own belated illumination that Russian government trolls were peeking into voter-registration lists across the republic. “Jim Comey is the cop and I’m the fireman,” he jibed, and he echoed Comey’s testimony to the Senate that, for all the hair-pulling and hand-wringing in the Capitol, Putin’s malfeasance didn’t really achieve anything measurable at the ballot box.

“Based on everything I know,” Johnson said, “I know of no evidence that through cyber-intrusion any votes were altered or suppressed in some way.”

Still, he explained, the whole mess might have been mitigated had its victims heeded his own warnings, such as last summer, when he informed the Democrats that their email server had been flipped open like a can of caviar.

“The answer,” Johnson said, “was not reassuring: the FBI and the DNC had been in contact with each other months before about the intrusion, and the DNC did not feel it needed DHS’s assistance at that time.”

“I should have bought a sleeping bag and camped out in front of the DNC,” Johnson told the Intelligencers. State officials, he griped, were equally sanguine when he suggested their election system be designated as “critical infrastructure” and thus eligible for federal protective funds.

“To my disappointment, the reaction to a critical infrastructure designation, at least from those who spoke up, ranged from neutral to negative. Those who expressed negative views stated that running elections in this country was the sovereign and exclusive responsibility of the states, and they did not want federal intrusion, a federal takeover, or federal regulation of that process.”

“If you want to try to federalize elections in this country,” said Jeh Johnson, “good luck.”

Going forward, the ex-secretary warned, “In this realm and at this moment, those on offence have the upper hand. Whether it’s cyber-criminals, hacktivists, or nation-state actors, those on offence are ingenious, tenacious, agile, and getting better all the time. Those on defence struggle to keep up.

“Cyberattacks of all manner and from multiple sources are going to get worse before they get better,” he continued. “Now the key question for the President and Congress is: what are we going to do to protect the American people and their democracy from this kind of thing in the future?”