Sandy vs. America's greatest city — Round 2: Dealing with the aftermath

In the weeks and months ahead, the destructive storm will test the resiliency of New York City 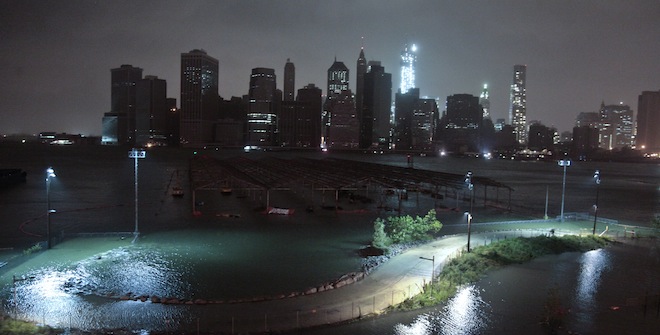 Manhattan is in many ways the nerve centre of the world—its unsurpassed capital of trade, finance and politics. Hurricane Sandy has provided an awkward, tragic reminder that the island’s “natural” state, after much alteration by humans—and occupation by 1.6 million of them—is half-submerged. Alan Weisman, author of the bestselling eco-fantasy The World Without Us, notes that the New York City subway system has to pump 50 million litres of water just to keep the tunnels dry on a nice day.

“Manhattan used to have systems of streams and rivers on the island, but when the city was built on a grid they got buried,” says Weisman. “It also used to be very hilly—that is the literal meaning of the word ‘Manhattan’—but those hills were flattened.”

For better and worse, the effects of Sandy on the New York-New Jersey region largely met the expectations of planners, forcing a surge of four extra metres of water almost directly into the mouth of the Hudson River. As anticipated, seawater filled the Queens-Midtown Tunnel, covered the runways at John F. Kennedy Airport, poured into building foundations at Ground Zero, and gushed in through elevator doors at the Exchange Place PATH rail station in Hoboken, N.J.

As the U.S. Army Corps of Engineers dispatched a special “unwatering team” to the metropolis, the U.S. northeast and a few unlucky property owners in southern Ontario began to survey the damage from Sandy. (Meanwhile, citizens of Appalachian states such as Tennessee and West Virginia both suffered a bizarre, unprecedented 60-cm blast of wet snow.) By midweek, the storm had caused as many as 50 deaths in the U.S., mostly from falling trees, after having already killed 69 in the Caribbean. A Toronto woman was killed by a falling sign in the city’s west end.

In the coming weeks and months, the storm will be a major test of resilience for its targets. Areas hit head-on by the hurricane include Atlantic City, N.J., whose casino-based economy was already struggling against the rise of rival gaming establishments in neighbouring states; most of the city was underwater at the height of the surge, and its famous boardwalk has been all but obliterated. The New York Stock Exchange closed for floor trading over two consecutive days—the first such weather-related closure since 1888.

Prior estimates by the insurance industry of the losses from a Sandy-type hurricane range from $10 billion to $20 billion, with a few high-rollers willing to go as high as $30 billion. Economists are hopeful for a small “broken window” effect on the U.S. gross domestic product, with perhaps even an overall net boost to economic growth. But bean counters at Moody’s, the credit rating agency, noted that everything depends on how long the infrastructure effects endure: “Potentially amplifying the storm’s national fallout are disruption to northeastern seaports, airports and rail lines, and potential damage to the region’s energy infrastructure.”

Econoblogger Arnold Kling said his outlook was “downbeat,” noting that Sandy was only a category 1 storm but that the New York-New Jersey hub is more complex in every way than New Orleans. “My guess is that it will take much longer to get back to normal than most people are assuming,” he wrote, recalling past worries about overlapping, cobbled-together New York City transport and power systems that now face their largest-ever challenge. “In fact, the process will take so long that in the meantime ‘normal’ will have been redefined.”