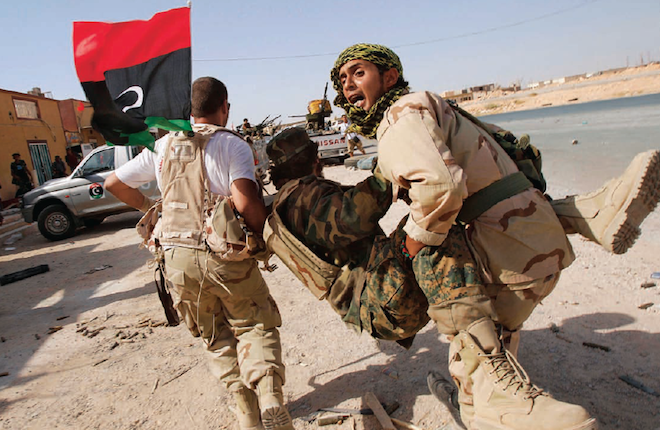 Canada’s Department of Foreign Affairs and International Trade (DFAIT) hired a commercial supplier to provide emergency medical equipment to Libyan rebels fighting dictator Moammar Gadhafi, in part over concerns that some material that the Canadian military could have provided was made in Israel or marked with crosses that DFAIT feared resembled those worn by Crusaders.

In June 2011, Foreign Affairs Minister John Baird made an unexpected visit to Benghazi, then the headquarters of Libya’s National Transitional Council, which Canada had just recognized as the country’s legitimate representative. The visit coincided with the delivery of some 333 emergency trauma kits, which Baird described as “a gift from Canada to the Libyan people.” The kits were purchased through Relief Chain Solutions, a Gatineau, Que.-based supplier, at a cost of approximately $66,500. Shipping costs brought the total price for delivering the kits close to $83,000, according to DFAIT.

Maclean’s heard from a source familiar with the decision that DFAIT had considered using Department of National Defence material but chose not to in part because some of it was from Israel and labelled as such. Maclean’s then filed Access to Information requests with DFAIT and the Canadian Commercial Corporation (CCC), which hired Relief Chain Solutions on DFAIT’s behalf.

The resulting disclosures, which came more than six months later (and in DFAIT’s case is not complete) show that DFAIT and CCC were scrambling on short notice to obtain trauma kits that could be delivered when Baird landed in Benghazi.

A June 20, 2011, email from Col. Frances Allen, then director of support operations at DND’s strategic joint staff, to Bruno Nordeste, a program coordinator in DFAIT’s stabilization and reconstruction programs division, hints at potential problems with the material DND could provide. Allen notes that packaging on emergency trauma and combat dressing “indicates that they [redacted] so we are removing them from the shipment.”

DFAIT cites section 15(1) of the Access to Information Act as reason for not disclosing what on the dressing packaging made it unsuitable for shipment to Libya. This section allows a government department head to withhold information that “could reasonably be expected to be injurious to the conduct of international affairs, the defence of Canada or any state allied or associated with Canada.”

A DFAIT official told Maclean’s: “There were some sensitivities, that we’re going to be sending stuff into a country that is in a full revolution mode, and they didn’t want to offend. So they tried to find items that would be culturally neutral.”

The official confirmed that some of the DND material was from Israel, and that they did not consider sending it as a result. Some material was also deemed problematic because it was marked with a cross.

In a statement emailed to Maclean’s, DFAIT spokeswoman Chrystiane Roy echoed concerns about “potential sensitivities around the original sourcing and packaging of the materials,” noting that some DND gear “had the St. John Ambulance/Maltese Cross prominently displayed which closely resembles a Crusader cross.” The statement did not mention Israel.

There is no evidence that DFAIT consulted Libya’s National Transitional Council to see if it would have rejected medical supplies that came from Israel or were marked with a cross. DFAIT did not answer a question from Maclean’s asking if it had done so.

DFAIT had less than two weeks to find and deliver the medical kits before Baird arrived in Benghazi. Access to Information disclosures suggest that normal checks to ensure good value for money were skipped because of the rushed deadline.

“There will be no financial due diligence,” Sue Elgar, manager of procurement at CCC, wrote to colleagues on June 22, discussing the probable deal with Relief Chain Solutions. A DFAIT “task request” to CCC confirmed that “dispensation of supplier due diligence” was authorized. And a DFAIT “concept assessment” form notes: “On an emergency basis, this project did not go through the standard project approval process.”

But Roy told Maclean’s it was more “cost effective” to source the material through Relief Chain Solutions rather than DND, because of last-minute shipping costs that might have pushed the total cost of delivering DND material to Libya up to $250,000.

“This was a straightforward transaction where the commercial entity in question had a very positive reputation and successful track record. Due to the urgent basis in which these supplies were needed, we felt as if enough due diligence was done for this contract to proceed,” she said in a statement.

In a second statement, Roy added: “The decision not to use the DND kits was one made primarily on a cost-saving basis and had nothing to do with the manufacturing country.”

DFAIT and CCC appear to have been happy with the process. Sue Elgar at CCC later told colleagues in an email that Relief Chain Solutions had “moved heaven and earth” to get the kits to Libya in time for Baird’s arrival. In an email to DFAIT members involved in the project, Roman Waschuk, then the deputy head of DFAIT’s stabilization and reconstruction task force, noted references to the trauma kits in press coverage of Baird’s visit. He said these were “an illustration of the media effectiveness of the approach chosen.”