Suddenly pedalling isn't only for the poor in congested Mexico City 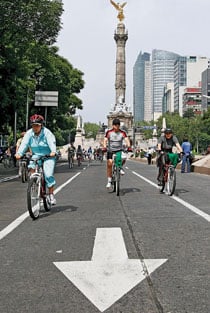 The prospect of cycling Mexico City’s mad streets alongside its famously distracted drivers seemed like suicide to Adrienne Grigoli, 36. Especially since the government did away with driver exams. So when Ecobici, a bicycle sharing service, was first pitched to her office, the human resources manager was sure “everyone was going to get run over.” Then there were the negative perceptions: Mexicans consider cycling a poor man’s pursuit, associated with vendors peddling tamales from pots pushed on tricycles.

Still, five of Grigoli’s employees signed up for Ecobici, which charges a $30 annual fee to borrow a three-speed bike for unlimited 45-minute loans. Another 15 eventually followed, including Grigoli, an expat Brazilian who moved to Mexico City as a teen in the mid-’90s and had, until then, always considered cycling, “kind of chafa”—slang for something cheap, uncool and of questionable quality. She became a convert in this mega-city of nearly nine million—another 11 million live in the sprawling suburbs—where cycling has suddenly become stylish and cyclists are claiming their places on the Mexican capital’s crowded thoroughfares.

Ecobici launched two years ago with 1,200 bikes spread throughout a business district and nearby Condesa, a neighbourhood known for its leafy streets and hip cafés. It has since become so popular that a waiting list for new members had swelled to six weeks. Its recent expansion to the posh Polanco district puts bicycles for borrowing on streets better known for selling a range of luxury items, from Louis Vuitton bags to bulletproof SUVs. “For many people it’s more of a fashion statement than a method of transportation,” said Diego Ramón; at his Jack Rabbit Retro Bikes, granny-style two-wheelers with fat tires and handlebar baskets fly off the shelves.

But not everyone riding a bike is a fashionista; Ramón is selling a growing number of commuter bikes. In Mexico City, which suffers the world’s worst commute, according to a recent survey, traffic crawls along at an average of 17 km/h—so slowly that vendors hawk everything from newspapers to pre-paid phone cards on thoroughfares. And it shows no sign of abating. Every time government introduces a new rule to curb traffic—forbidding cars with out-of-town plates from Mexico City streets or forcing owners to park their cars on certain days—drivers find ways around them. Often by buying a second car.

Yet these days, recreational cyclists rule the grand Paseo de la Reforma boulevard on Sundays, when cars are kept away. A motley group including pot smokers, professionals, even the “gente bien”—polite society—set out from the iconic Ángel de la Independencia monument every Wednesday at 9 p.m. for rides to the region’s outer reaches. “Three years ago, there used to be 15 people” on the night rides, says bike mechanic Ernesto Corona. Nowadays, there are 75 riders—when it’s raining.

This propensity for pedalling is helping change perceptions of Mexico City, which has gone from being an ecological embarrassment to an emerging environmental example for its attempts to curb greenhouse-gas emissions. These days, residents can sometimes see the nearby Popocatépetl volcano. And the soupy, yellow haze that sometimes hangs above the city—trapped by a thermal inversion—now dissipates more quickly. Mayor Marcelo Ebrard, who won 2010’s World Mayor Prize, has made political hay of the improvements: Mexico City registered 211 days with “acceptable” air quality in 2011, compared with just eight good days 20 years ago, he mentioned in September’s state of the city address. “The city,” he said, “has stopped being the ugly duckling of the international community.”

Indeed, with a murder rate lower than Chicago, Mexico City has also become an unlikely magnet for Mexicans fleeing organized crime and cartel violence in the provinces. And all the new bikes help burnish the city’s image as a sane corner of a country seen to be under siege.

Ebrard has built plenty of political capital through the cycling projects, although they initially appeared quixotic to some (not unlike his attempt to build the world’s biggest ice rink in a city whose average annual temperature reaches almost 20° C). Closing the Reforma boulevard for bikes “proved there was a demand for cycling,” says Martha Delgado, Mexico City’s environment secretary.

Delgado considers Mexico City ideal for cycling, as it covers a pancake-flat lake bed in a high-altitude valley. But a backlash against cyclists is also underfoot. Radio host Ángel Verdugo called cyclists a plague during his afternoon drive show, and urged listeners to run them down. Taxi drivers complain cyclists bring as many bad habits as motorists. “It’s not Sunday!” motorists sometimes scream when they see cyclists. Delgado expects them to see more cyclists—or become cyclists themselves, as they tire of sitting in thick traffic. “People will give up their cars, when they’re sick of their cars.”