From bringing food to prayers, a nation has worked together for weeks to support the soccer players trapped beneath the ground. 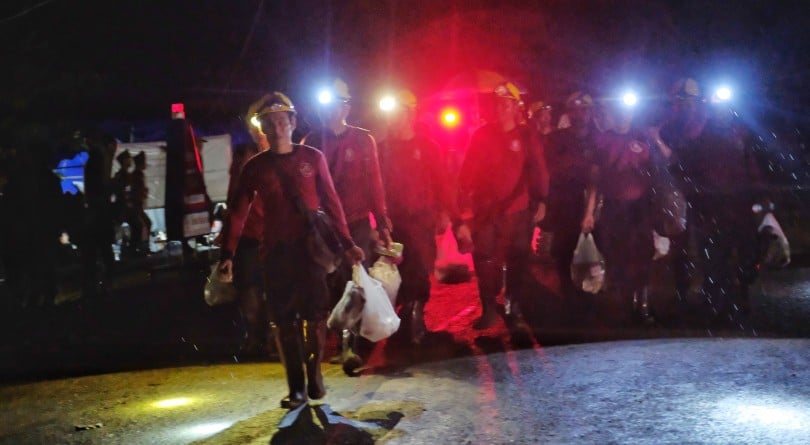 MAE SAI, THAILAND — When people in Thailand say goodbye, occasionally they say this: “We will come together when the nation needs us.”

For more than two weeks, twelve of the country’s boys and one of their men have been encased in a dark mountain, hoping someone would bring them into the light of day. Their nation needed them so the people of Thailand came together. And now, to each and every boy who braved an entrapment and escape attempt that transfixed the world, there is no need to say goodbye.

Before the soccer players sat huddled in the cave that should have killed them, their coach would take some of them to another cave, which lay at the back of the Mae Sai temple. The cave’s entrance is a black wound surrounded by blue vases and gilt figurines cutting into a wall of jagged rock. The kids would light a candle, they would slip into the dark, and they would pray.

The temple got busier after the kids disappeared. Monks and villagers left wicks flickering for them just outside the opening of this cave. The old bald nun who has sold offerings for a decade said she’d never seen so many laid down. Mae chee Pim’s baskets of glass beads are running low. And the villagers offered promises: A lot of people say they swore to Buddha that they’ll become vegetarians if he spares the children’s lives. Thailand is about to become a barnyard animal’s paradise.

But in this country, people offer more than thoughts and prayers when their kids are in danger.

They started with food. When they donated too much of that to the rescuers and support workers, it was rubber boots, ponchos, and headlamps instead. Some sang songs, some took school lessons on how to welcome their classmates back, some gave money to the families to let them sit outside the cave, waiting.

And time—they gave hours and hours of that. At the camp outside the cave, Warne Srichai said she took a week away from her job as a nanny to keep the camp’s toilets clean. Ubol Kankham, normally chairwoman of a medical organization, picked up wrappers around the road everyday. Hundreds of others have bussed in from neighbouring farms and flown across the country just so they could tie a yellow kerchief around their neck and ask what had to be done.

When their nation needed them, these people weren’t going to sit around alone.

Was it their king that inspired him? That’s what some of their hats say, a jaunty blue ball-cap also used by volunteers at King Bhumibol Adulyadej’s cremation last year, with a badge stuck to the front showing a smiley cartoon-family cleaning house: “I work for Father.” In a nation with deep divisions between cities and the countryside, the monarchy—even led by a new king—makes many people feel that they are home.

And then there are the boys.

Beyond Thailand’s borders, the world is eclipsed by the dark side of nationalism. This dense, rock-hard, let-no-one-in version of collective spirit has smashed apart continental unions. It has bludgeoned trade pacts. It has set vigilantes upon migrants. It has stolen children from their mother’s arms and it has stuck them in cages and it has not bothered to record their names.

For the children in the cave—Titan, Mig, Dom, Pong, Mark, Tern, Bew, Adul, Note, Nick, Tee, and Night—nationalism demanded more. It said that even a country’s weakest members are worth everything it’s got. Everyone was welcome to be a part of the mission to bring them out. Everyone had to come home.

“Food for all! Even foreigners!” called out yellow-kerchiefed Phawut Wong Chai at a tent on Saturday, handing around plates of rice.

So in a rescue operation that led a group of children through water when they didn’t have the first idea of how to swim, not one boy was left behind. They were all in this together: in unthinkable danger, and in impossible survival. Around the television screens, the radios and the newspapers of Thailand, from the river plains of the south to the steam-covered mountains of this, the north, everyone else was with them too. When the ambulances drove the boys from the cave, people followed even then, cheering.

Under the towering gold Buddha that sits beside the temple cave, candlelight bounces off a dark mass of rock, cutting through a fog of incense: if it wasn’t set against all this suffocating blackness, it couldn’t be seen so clearly. At the temple, candles are used to ask for something. One wonders what purpose they’ll serve now. The people in Mae Sai kept saying this is everything they wanted.

Their kids needed them, and the nation came together to bring them back into the light. But then, they always were the light. Twelve small boys started a fire under a country, illuminated what it means to show up when your presence is required, and even if these children had been forced to say goodbye, the world could have only been left a little brighter for it.