The conflict Trump always seemed to want reaches his doorstep

Image of the Week: George Floyd died in Minneapolis but protestors gave voice to their anger outside the White House 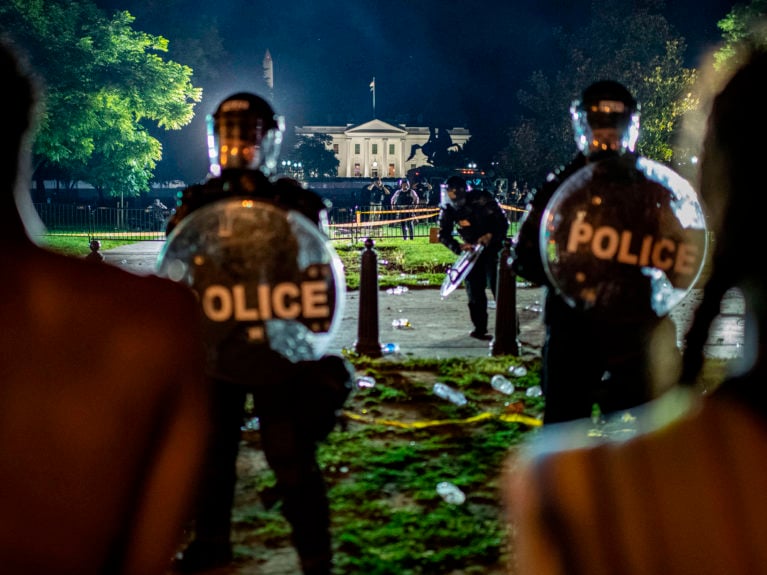 Demonstrators stare down secret service and park police officers outside of the White House on Saturday. (Eric Baradat/AFP/Getty Images)

America is burning. The movement began as nationwide protests over the death of George Floyd—a Black man who allegedly bought cigarettes with a counterfeit $20 bill, resulting in responding police pinning him down and one pressing a knee to Floyd’s neck until he died. But it haserupted over the past week into the country’s most widespread civil unrest in decades. Across at least 140 cities, protesters are taking to the streets, some peacefully and others violently—in the latter case, looting stores and setting fire to cars and buildings. At least 4,400 people have been arrested, according to a count by The Associated Press. It seemed inevitable, then, that the protests would eventually reach the White House, ground zero for racial divisiveness in 2020. All 1,700 members of D.C.’s National Guard were activated while President Donald Trump, at least briefly, was escorted to a safety bunker, which is perhaps where he sat while furiously tweeting messages like “LAW & ORDER!” and “FAKE NEWS!” without context. White House staff shut off the lights at 11 p.m., when a citywide curfew was supposed to usher people home. Instead, protesters burned an American flag outside the White House lawn; others defaced nearby national monuments. It’s impossible to deny that Trump’s reaction has exacerbated these protests, as he blames the violence primarily on the nebulous group known as antifa (anti-fascists), which he also claimed he would designate as a terrorist organization. If he does, that almost certainly won’t help—if anything, it may simply ignite further violence. So what’s Trump’s endgame, anyway? Does he even have one? Or perhaps he’s just the kind of leader who, as the saying goes, likes to watch the world burn.