Crisis in Syria: The problem with Obama's limited response

Michael Petrou on the Damascus dilemma 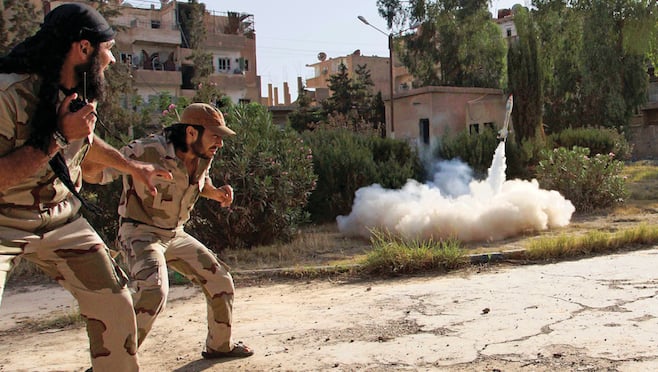 Sitting in the crosshairs of ready-to-launch American cruise missiles, Syrian government officials likely grasp at any bit of potentially good news that comes their way. But the state-run Al Thawra newspaper at least summed up perceptions in the region when it described U.S. President Barack Obama’s decision to seek congressional support for a military attack as a “retreat.”

Obama’s surprise move on Saturday came a day after Secretary of State John Kerry explicitly blamed the Syrian government of Bashar al-Assad for a chemical-weapons attack on a suburb of Damascus that he said killed more than 1,400 people, and made a forceful case why the Syrian regime must be held accountable. He said nothing then about a vote in Congress.

In truth, Obama is likely seeking congressional approval because he wants an explicit mandate backing an attack (as well as votes on record, should members of Congress later seek to disassociate themselves from the decision).

But waiting for Congress to vote means any American (and probably French) attack will not take place until after Sept. 9, when Congress returns. In the meantime, Obama has stressed American military action will be “limited and proportional”—punitive strikes in response to Syria’s use of chemical weapons, rather than a commitment to throw America’s military might behind the rebels and force Assad’s defeat.

America is not rushing into battle. It is planning a precisely scheduled—even tailored—war. It wants to hit Syria quickly and then leave. Any intervention “will not be open-ended,” said Kerry. That may be a difficult promise to keep.

THE FIRST PROBLEM with a limited response is that, as generals like to say, “the enemy also gets a vote.” Belligerent parties, if they are lucky, can decide how a war begins; they can’t control everything that happens next.

Obama might want a short and contained intervention that sends a message to Assad not to use chemical weapons. Assad might choose to ignore it and carry out additional gas attacks against civilians. Then Obama will be forced to weigh a response all over again.

Syria, or its allies in Iran and the Lebanese militia Hezbollah, might also choose to retaliate against American targets or allies in the region, including Israel. This, too, will lead America to consider further interventions.

The second problem with a limited response is that it may not shape the course of the wider war, or stop the ongoing brutality of Assad’s regime, regardless of whether Syria continues to employ chemical weapons, or increases the severity of its attacks on civilians with its conventional arsenal.

Mohamad Khatib, a member of the opposition Syrian National Council, welcomed any sort of Western military action against Assad’s forces but questioned why it has taken the extensive use of chemical weapons to make such outside military intervention likely. “More than 100,000 Syrians have been killed already,” he told Maclean’s. “Are they not people too?”

Long and costly wars in Iraq and Afghanistan have weakened the will of Western countries to intervene militarily in Syria. Such memories contributed to the defeat in Britain’s Parliament last week of a motion that might have led to Britain’s participation in military strikes. Obama has also tried to reassure the American people: “This is not Iraq, and this is not Afghanistan.”

But the war in Syria has also presented the United States with unique reasons to fear deeper involvement—most notably the increasingly Islamist bent of rebels fighting Assad, including some with links to al-Qaeda. White House strategists worry about the nature of any post-Assad rulers of Syria, particularly if America is seen to have allied itself with them.

That’s why John Kerry, in his televised address arguing for intervention, said that America would “not assume responsibility for a civil war that is already well under way.” It also explains why America is reportedly yet to deliver arms to Syrian rebels, despite pledging to do so in June.

Apprehensions about extreme Islamists among opposition fighters are not empty. Naomi Kikoler, director of policy and advocacy at the Global Centre for the Responsibility to Protect, this summer interviewed Syrians who have fled their homes for refuge in Turkey. They reported rising numbers of Islamists, including foreign ones, fighting Assad. “There were a lot of concerns that the motivations of these foreign fighters are not to create a future Syria where Syrians of all walks of life can live freely, where Syrians who are secular or Christian can have their own place and ensure their physical protection is guaranteed,” she said.

Khatib, the Syrian National Council member, does not deny the presence of jihadists in opposition ranks, but he says most Syrians reject their views. In a post-Assad democracy, he says, they will be marginalized, or they will moderate their stance. “This revolution began with a desire for democracy. Syrians will accept nothing less,” he says.

Some analysts have argued it is the West’s refusal to intervene in the Syrian civil war that has allowed jihadist groups—often funded by wealthy donors in the Gulf—to prosper.

“Some of the risks have evolved precisely because nothing was being done,” says Yezid Sayigh, a senior associate at the Carnegie Endowment for International Peace Middle East Centre in Beirut.

The proper response now, according to Georgetown University professor Daniel Byman, is greater engagement with the Syrian rebels. Limited air strikes, he says, risk creating the impression that the United States is committed to the rebel side—raising unfulfilled hopes among them, and allowing Assad, if he prevails, to claim victory against America as well.

“A much more expansive effort to organize, train and arm the Syrian opposition [is needed],” says Byman.

“Right now, the non-jihadist opposition is very weak. So you want to build them up. The problem is, that’s a long-term approach. It’s not going to solve the problem of chemical use. We have to think beyond Assad. We have to think what’s going to remove him in a comprehensive sense, but also what’s going to happen to Syria after he falls. Both of those should be shaping our policy.”

Removing Assad will require a more intensive military intervention than what appears to be brewing, says Robert Satloff, executive director of the Washington Institute for Near East Policy. He recommends a sustained aerial campaign similar to the one that eventually drove Serbian forces from Kosovo in 1999.

Critics of such an aggressive approach worry that doing so will commit the United States to a nation-building process once Assad is gone. Satloff rejects this. “We can’t remake Syria for the Syrians,” he says. “But we can provide an opportunity for the lesser of the bad actors to hopefully carry the day.”

Reached in Istanbul, Hassan Hachimi, a member of the umbrella Syrian Opposition Coalition, told Maclean’s he hopes Western air strikes will “destroy the regime’s killing machine and provide safe zones to enable our Free Syrian Army to achieve its goal of freedom to our people and to protect our civilians on the ground.”

Obama, however, remains cautious. On Tuesday, he mentioned a “broader strategy” of strengthening the opposition, but provided no details. America has been pushed to respond because of the Assad regime’s use of chemical weapons that, terrible as they are, have caused a small fraction of fatalities in Syria. And the primary goal of America’s intervention will be to prevent the use of such weapons again.

It’s a nuance that must seem strange to victims of Assad. Last month, a Syrian government plane loosed an incendiary bomb on a school playground in the north of the country, killing more than 10 children. The survivors, shaking and charred, looked comprehensively traumatized. They had suffered the effects of a conventional weapon, dropped from a jet that had lazily circled overhead looking for targets. A doctor, interviewed by the BBC in the aftermath of the attack, said the world has failed Syria. She’s right. It’s not clear this is about to change.