The death of Jamal Khashoggi and the weaponization of diplomacy 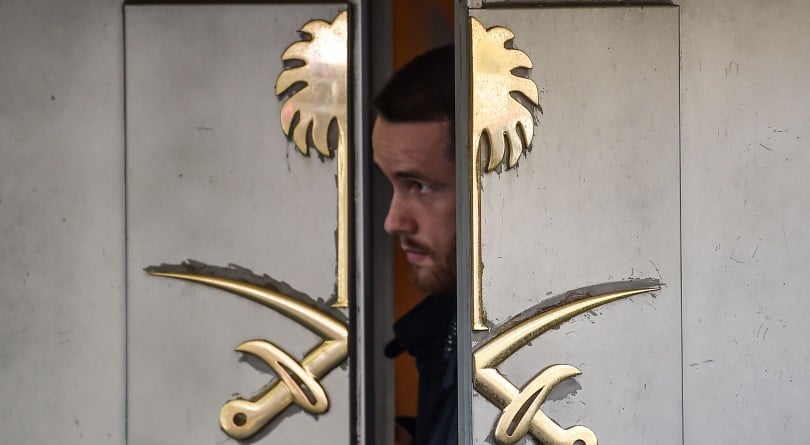 A security member of the consulate looks between the entrance doors of the Saudi Arabian consulate in Istanbul on Oct. 12, 2018. (OZAN KOSE/AFP/Getty Images)

Jamal Khashoggi, the Saudi journalist and critic of Saudi Arabia’s monarchy, has been missing now for two weeks. For those who haven’t yet delved into the details of what happened on Oct. 2 at the Saudi Arabian consulate in Istanbul, here is a BBC backgrounder and timeline of events. Suffice to say, it’s a sordid affair, deeply disturbing and, if proven true, ample evidence of Saudi Arabia’s continued contempt for human rights and international law.

The Saudis, of course, have denied any involvement in the alleged torture, murder and dismemberment of Khashoggi. But as the days pass, and the evidence mounts, it’s becoming increasingly absurd for them to claim the man has simply gone missing.

Something criminal has transpired inside the Saudi consulate, whether it was the premeditated killing Turkish authorities say they have documented or, as some have suggested, a kidnapping attempt gone horribly wrong. In either case, there’s a disturbing thread left dangling: the Saudis have abused their diplomatic privileges to pursue a political agenda in a foreign country.

It’s not the first time, and they’re not alone. It seems these days more and more authoritarian regimes are using diplomatic missions as command centres where they hatch plots to intimidate and, in some cases, murder their critics. Russia is the most obvious example. Turkey has also gone down that path, though not to such an extreme degree as the Russians or the Saudis.

The trend is part of a bigger shift in diplomacy, from its traditional role as purveyor of information and conflict de-escalation to active participant in the political agendas of whichever government it represents.

Authoritarian regimes in particular–but not exclusively–now treat diplomatic missions as another tool in their domestic policy toolbox. And for them, silencing critics who live abroad is just as important as silencing those at home.

Take the Saudis: Khashoggi, who went into self-imposed exile in the U.S. not long after Saudi Arabia’s Crown Prince Muhammed bin Salman began cracking down on critics of his sweeping reform program, was perceived as a threat to the regime. Salman, the 33-year old heir-apparent to the Saudi throne, has not taken kindly to critics. Inside Saudi Arabia, activists have been jailed at an alarming rate; internationally, they have been threatened and attempts made to lure them into embassies where they can be kidnapped and sent back to the Kingdom.

The Russians have taken another tack, running assassination operations on foreign soil, possibly with some help from their diplomatic missions, experts believe, while Turkey has used some of its missions, including the consulate in Toronto, to organize intimidation campaigns against Gulenists, the religious network blamed for an attempted coup in 2016.

That blurring of the line between the foreign and the domestic, where domestic issues play out in the international arena, is a relatively new phenomenon, says Ilter Turan, Professor Emeritus at Istanbul’s Bilgi University and former president of the International Political Science Association.

“The content of what diplomacy has to deal with has expanded over time,” he says. ” In recent years, because of the extensive mobility of people—the relative ease with which information travels, the relative ease with which people travel—the number of asylum seekers has increased. Many non-democratic societies now have people who have left those societies and engage in activities that are highly critical of them. Of course, the societies from which the asylum seekers come want to control these people since authoritarian systems are very intolerant of criticism.”

What happens on foreign soil, Turan adds—particularly in the fast-paced environment of the internet where citizens of one country can express their views immediately and to a wide audience from the safety of another country—matters, especially to authoritarian regimes that value control over all else.

And Salman, Turan points out, is a special breed of control freak. Those who know him say he harbours a messianic vision of his role as a reformer. According to one European diplomat based in Istanbul, who spoke to Maclean’s on condition of anonymity about the prevailing mood in the diplomatic community after Khashoggi’s disappearance, few are surprised by what happened. Salman, he says, falls on the extreme end of the paranoia scale, seeing enemies in every tweet and op-ed written against him. And Khashoggi was one of his most prominent critics.

“It’s not the first time Muhammed bin Salman has exhibited this kind of extreme behaviour,” he says. “It wasn’t so long ago that he ordered what amounted to the kidnapping and intimidation of Saad Hariri, the Lebanese Prime Minister.”

More broadly, what happened at the Saudi consulate is only the latest, albeit most alarming, example of the shifts taking place in international relations. The world today is more divided, and more paranoid, than it has been at least since the Cold War. But even during the days of communist versus capitalist intrigues, the mistrust between nations was confined to two alliances: the Soviet bloc and the West; national interests were aligned to one or the other. Now, every nation is pursuing its own interests individually, and the world order has subsequently taken a chaotic turn.

The fallout has changed how diplomatic missions operate.

“[U.S.] diplomacy today is not about intelligence gathering in the open,” Marc Grossman, vice-chairman of the Cohen Group, a Washington D.C.-based business consulting firm, and the former U.S. ambassador to Turkey, told me last spring. “Diplomacy today is about pursuing, pushing, promoting American policies and values. It’s not about observing and reporting anymore; it’s about programmatic efforts to defend the United States.”

In democracies, that kind of approach to diplomacy is relatively benign, or at least by and large remains within the broader confines of diplomatic norms. How Trump might change that is anyone’s guess, but at least for the time being countries like the U.S—and Canada, for that matter—don’t engage in the kind of defense of interests that includes strong-arming critics into keeping quiet.

But even democratic nations like ours have stepped up the use of diplomatic missions for purposes other than diplomacy. For us, the threat is transnational terrorism, and the response has been increased intelligence gathering, with diplomatic missions often serving as operation centres.

That’s the world we live in today, and in that world, men like Salman and his authoritarian counterparts see very little standing in the way of pursuing their enemies with little regard for international laws and norms.

“This kind of thing was happening all the time during the Cold War,” the European diplomat says. “People went into Soviet bloc embassies and consulates and never came out. But we are starting to see it spread more today. And that’s worrisome.”

Indeed, Saudi Arabia has upped an increasingly deadly ante. Turan warns that the murder of Khashoggi represents a gross violation of centuries-old diplomatic traditions. His worry is that the precedent it sets risks others following suit.

“What happened in Istanbul is not a domestic issue, neither for Turkey and certainly not for Saudi Arabia,” he says. “It’s a global concern because it pertains to how diplomatic privileges are used. Therefore, it is imperative that the world respond in unison. The Saudis, and any other regime that believes it can subvert diplomatic norms in this way, should be made to understand that this is unacceptable.”