Polio epidemics saw thousands fall ill and many die. But the contagious virus may soon be eradicated. 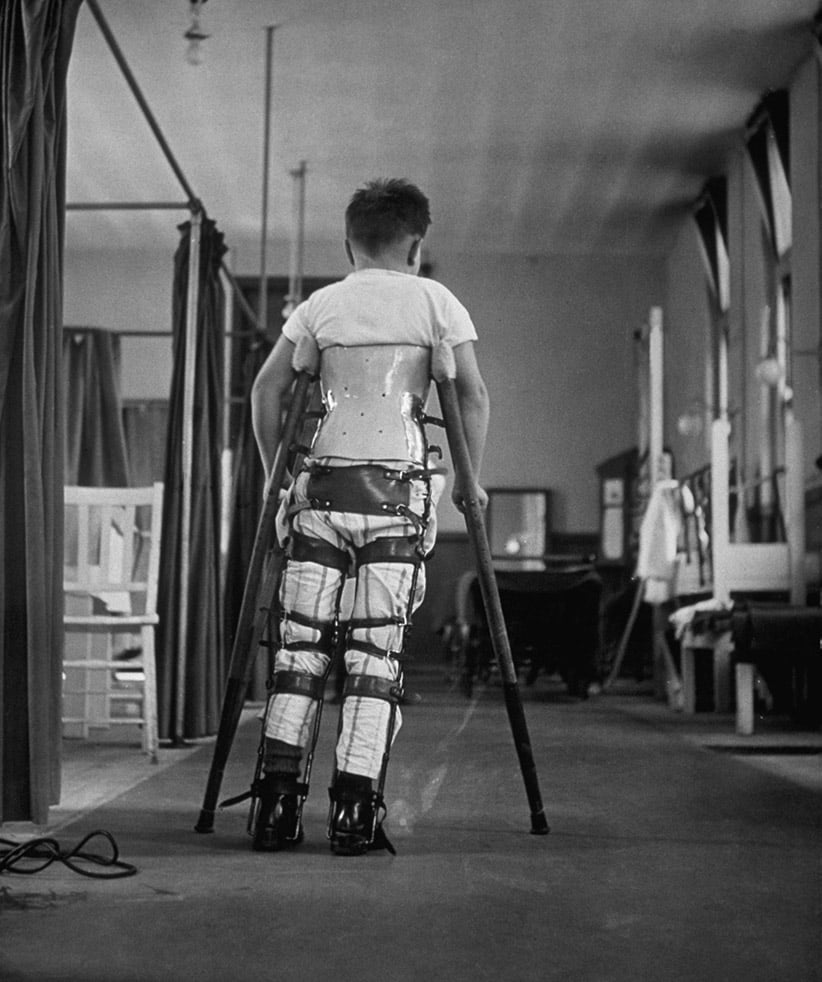 A child suffering from Infantile Paralysis learning to walk with the aid of a special support, at Queen Mary’s Hospital, London, 1947. (George Konig/Keystone Features/Getty Images)

Poliomyelitis was first described in 1789 as “debility of the lower extremities” by Michael Underwood, a British pediatrician and obstetrician. He and others observed the crippling effect of polio on a rising number of youngsters with fear and dread. But the disease had probably existed for centuries, as Biblical stories and Egyptian carvings of the lame suggest.

By 1840, Jakob von Heine, a German orthopedist, distinguished the disease from other paralyzing conditions, and correctly theorized that polio was contagious. Swedish pediatrician Karl Oskar Medin noted the disease’s tendency to attack infants. These men were the forefathers of polio research, but others followed. Over the next 50 years, as outbreaks blighted Europe and North America, scientists unravelled the mystery of “the Crippler.” Poliovirus was identified as the culprit. At worst, it kills patients by paralyzing their respiratory muscles; some survivors are left with weak limbs.

The new information did not immediately save patients. By the 1930s, medical authorities were at a loss for how to treat the thousands stricken with each epidemic; they relied on a mix of resourcefulness and desperation. Canada dispensed a free, unproven “convalescent serum” made from the donated blood of polio survivors. A nasal spray used on 5,000 children not only failed to “block” the virus, it also cost many their ability to smell.

One intervention prevailed: the iron lung. Terrifying to see, all the more so to occupy, this negative pressure ventilator looked like a metal coffin but was, in fact, the only way many polio patients stayed alive. Dozens were assembled in the basement of Toronto’s Hospital for Sick Children and flown by the Royal Canadian Air Force across the nation. When a storm cut power in Edmonton, nurses manually pumped the iron lung to keep patients breathing. Children who had never been separated from their parents lived inside the iron lung for weeks or more, even years. One of them, Jeanette Shannon, said in 1999: “We were the AIDS patients” of that era.

So it was extraordinary when, in 1948, Americans John Enders, Thomas Weller and Frederick Robbins grew poliovirus in living cells, earning them the Nobel Prize in Medicine. This led another American, Jonas Salk, to develop the first vaccine against polio in 1955. Canadians at Connaught Laboratories at the University of Toronto helped by finding a synthetic medium for growing cells and supplying fluids for the vaccine. Salk refused to patent it based on his “bio-philosophical” beliefs. “Can you patent the sun?” he’d say. Forbes estimated in 2012 that Salk thereby forfeited US$7 billion.

The human cost of polio was peaking in North America just before Salk’s discovery. In 1952, there were more than 21,000 paralytic cases in the States. The next year, Canada saw 9,000, including 500 deaths. Among the ill were Neil Young and Joni Mitchell, then aged five and nine respectively, who overcame polio to become music icons. Both Paul Martin Sr. and Jr. had it. The proliferation of polio was eventually, and ironically, blamed on improved sanitary standards: less frequent exposure to the poliovirus, which is transmitted between humans via the fecal-oral route, compromised the body’s natural immunity-boosting ability. The vaccine reversed that, and by the late ’60s and ’70s, the disease was practically eliminated in many industrialized nations.

But now polio was surfacing in the developing world. Attempts to run immunization campaigns, some using an oral vaccine first developed by Albert Sabin in 1961, proved insufficient. In 1985, Rotary International kickstarted an unprecedented public health initiative, PolioPlus, with a first pledge of US$120 million, to coordinate international programs and financial support. By 1988, there were 350,000 cases of polio worldwide—and more than 1,000 children were paralyzed every day. That year, the World Health Organization launched the Global Polio Eradication Initiative (GPEI) to obliterate the disease by 2000. That goal was not realized, but the effort has forced another realization: while the disease has become easier to prevent medically, the international politics of polio prevention have become more complex.

The CIA used a polio vaccination campaign as cover for an attempt to identify Osama bin Laden, then hidden in Pakistan. That has inflamed anti-vaccine sentiment among some factions in the region. To overcome this, public health experts recommend a campaign led by Muslims that uses vaccines made in Muslim countries.

On Dec. 2, the GPEI weekly update provided the clearest hope for the eradication of polio: In 2015, 60 cases have been reported in two countries (Pakistan and Afghanistan)—compared to 316 cases from nine countries last year. “Wild poliovirus transmission is at the lowest levels ever, with fewer cases reported from fewer areas of fewer countries than ever before.” Two hundred and twenty-six years since it was first described, polio itself has been crippled.

This story was updated on Jan. 5, 2016 to include Albert Sabin and Rotary International.