The forgotten Palestinians of Syria

Yarmouk, an unofficial Palestinian refugee camp in Syria, "has been transformed into a death camp, like one of the lower regions of hell," yet Palestinian leaders in the West Bank and Gaza have taken little notice 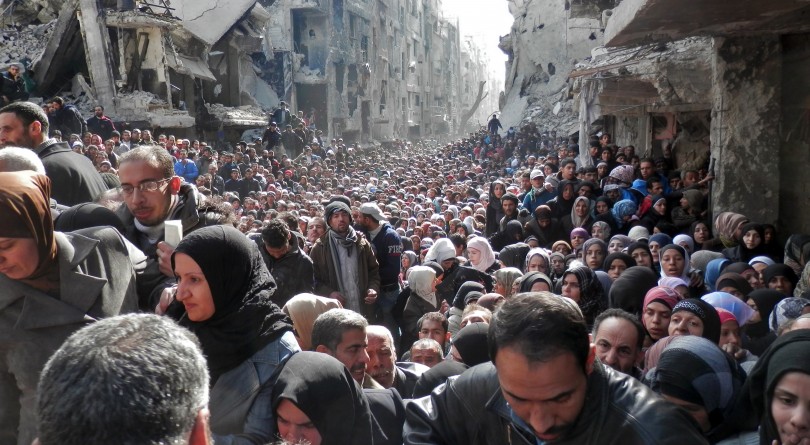 They are the forgotten, friendless Palestinians, ignored by their own leaders in Ramallah, tormented by their terrorist overlords, bombed and besieged by Bashar Assad. Cut off from the outside world, the 560,000 Syrian Palestinians have endured far greater suffering over the past seven years than their cousins in the West Bank and Gaza.

You’d never know it. They’re rarely heard from. And after the events of this week, their voices will only grow more faint.

As recently as seven years ago, Yarmouk was the beating heart of Palestinian Syria, home to roughly 150,000 patrilineal descendants of refugees from the Israeli-Arab conflict, going back to 1948. An “unofficial” Palestinian refugee camp, Yarmouk used to be a thriving hive of street merchants and honking taxis, just eight kilometres from the centre of Damascus. By Tuesday of this week, there wasn’t much left of Yarmouk but rubble.

In a replication of several scorched earth war-crime operations that have forced the surrender of opposition groups in pockets around Damascus — most recently Douma, the site of an apparent chemical weapons attack four weeks ago, and Dumayr, two weeks ago — the Assad regime struck a relocation accord with the main armed opposition group remaining in Yarmouk on Monday.

The deal with the Islamist Hay’at Tahrir al-Sham group stipulated the relocation of about 5,000 people from the villages of Foua and Kfraya in Syria’s northwestern province of Idlib, currently in the hands of opposition forces. In exchange, Hay’at Tahrir al-Sham fighters and their families were allowed safe passage out of Yarmouk, and the first of several buses carrying them arrived on the outskirts of Aleppo Tuesday evening.

The deal came after nearly two weeks of barrel bombings, mortar attacks surface-to-surface missile attacks and strikes by Syrian and Russian warplanes that pounded Yarmouk at a rate that reached 40 strikes every hour, according to the London-based Action Group for Palestinians in Syria.

At least two dozen civilians were killed. About 5,000 people — the majority of Yarmouk’s remaining civilians after a siege of nearly five years — fled into adjoining neighbourhoods. Said the UN Relief Works Agency’s Chris Gunness: “Yarmouk has been transformed into a death camp, like one of the lower regions of hell.” Estimates of the number of civilians still in Yarmouk’s bombed-out buildings vary, but they may be as few as 1,000, mostly old people and the wounded, trapped under fallen roofs or hiding in basements.

Before the Syrian uprising began, UNRWA used to run 28 Palestinian schools in Yarmouk, along with two community centres and three small hospitals, but the Assad regime had given the run of the place to the Popular Front for the Liberation of Palestine (General Command), a listed terrorist group in Canada, the European Union, the U.S and Britain.

In June, 2011, only four months after the Syrian uprising began, PFLP-GC militiamen shot and killed 13 Palestinian civilians who were protesting against the Assad regime. With the people of Yarmouk in an uproar, PFLP-GC leader Ahmed Jibril fled to Qatar. In December, 2012, after Assad’s warplanes first bombed Yarmouk, killing dozens of civilians, the PFLP-GC lost control of Yarmouk entirely and the pro-democracy Free Syrian Army moved in. But so did Jabhat al-Nusra, a now-defunct Islamist insurgent group intermittently affiliated with Al Qaida.

By July, 2013, the Assad regime had imposed a total siege of the entire district, and the people of Yarmouk were eating cats and dogs and the leaves off the trees. By March 14, 2014, an Amnesty International investigation concluded that 128 people in Yarmouk had starved to death. UNRWA – which holds exclusive jurisdiction over Palestinian refugees, putting them outside the jurisdiction of the UN High Commissioner for Refugees – had managed to secure only occasional food shipments into Yarmouk.

Roughly 80,000 Palestinian Syrians have fled to Europe. An equal number have fled to Lebanon and Jordan, but both those countries have now closed their borders to any further Palestinians from Syria. In Jordan, UNRWA clients receive half the meagre emergency aid dole that Syrian refugees get under the UNHCR’s jurisdiction. In Lebanon, Syrian Palestinian refugees are not permitted to work. UNRWA administers to about 430,000 Palestinians remaining in Syria – almost all of them rely on UNRWA aid. More than half have been rendered homeless by the war. Roughly 50,000 Syrian Palestinians are beyond UNRWA’s reach, behind siege lines.

In Ramallah, the humanitarian catastrophe suffered by Syria’s Palestinians has only rarely warranted any attention from Mahmoud Abbas, the president of the Palestinian National Authority. In Gaza, Ismael Haniyeh of Hamas has had frosty relations with the Assad regime, but he has taken great care to stay on the good side the Khomeinists in Tehran, who provide both Hamas and Assad with armour and money.

What this means is that Syria’s Palestinians have not only been left on their own against Assad’s barrel bombers and Russian warplanes. They are just as likely to be killed in encounters with the various jihadist forces ostensibly identified with the Syrian opposition camps, including the Islamic State and Al Qaida’s affiliates. In places like Yarmouk, Latakia and Deraa, they have died at the hands of Assad’s allies in Iran’s Quds Force and Hezbollah. Assad’s mercenary allies in Syria include the PFLP-GC, the Palestinian Liberation Army, the “Free Palestine” organization, Fatih Intifada, and Liwa Quds — all terrorist groups armed to the teeth and claiming to be fighting in the interests of the Palestinian people.

One of the many tragedies of Yarmouk is that even the young activists who stood up to the collaborationist enforcers of the PFLP-GC in 2011 didn’t intend to “take sides” in the Syrian conflict, and their tendency to neutrality is what enflamed Bashar Assad against them in the first place. “This ‘neutralised’ stand was enough to push the regime to classify Yarmouk as an ‘enemy’,” according to the Action Group for Palestinians in Syria.

By the Action group’s calculations, 3,702 Palestinians have been killed in Syria over the past seven years. That’s nearly twice the number of Palestinian civilians who were killed during the Israel’s Operation Pillar of Defence in Gaza in 2011, and Operation Protective Edge in 2014. But when Syrian Palestinians die, they die far from the television cameras, and their deaths prompt no rallies and marches in the streets of the NATO capitals.