The impossible task of stopping terrorism

Even as ISIS is failing in Syria and Iraq, its ideology lives on, leading to the murder of 440 people in the past three weeks alone 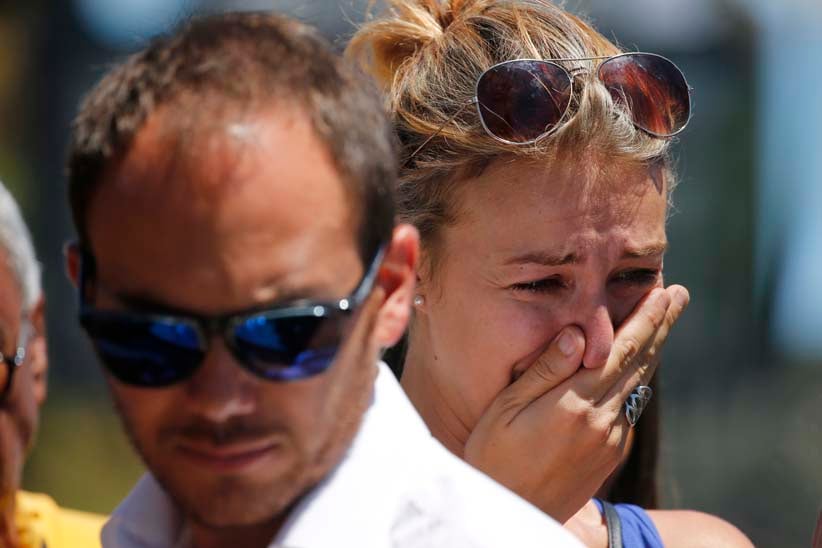 People react near the scene where a truck ran into a crowd at high speed killing scores and injuring more who were celebrating the Bastille Day national holiday, in Nice, France, July 15, 2016. (Jean-Pierre Amet/Reuters)

A wounded animal is a dangerous thing, and the so-called Islamic State (ISIS) is badly wounded. How else to explain the convulsions of violence the group that once considered itself the vanguard of a twisted Islamic world order has carried out, or inspired its followers to carry out, over the past two years? The group’s mission has failed; its  “caliphate” is collapsing. And its response, to lash out, has been predictable.

The rampage on Promenade des Anglais in Nice, France, carries all the hallmarks of the defeated: A suicidal fanatic with suspected Islamic State sympathies drives a truck through crowds of revellers, killing 84 people, including children. There was nothing heroic or revolutionary in the act. It was nothing more than a powerless bully venting his anger on easy targets. So was the attack on Istanbul’s Ataturk airport, and the horrific bombing of a market in Baghdad, and the murder of innocents at a cafe in Dhaka, the Bangladeshi capital.

It’s what the weak do: they prey on the vulnerable.

In less than three weeks, Islamic extremists have murdered more than 440 innocent civilians on behalf of ISIS, including fellow Muslims, maimed hundreds more and left the world wondering if the senseless killing will ever end. They have, no doubt to the glee of their puppet masters in Raqqa, Syria, Islamic State’s self-declared capital, strengthened the narratives of fear and division that increasingly plague the world and demonstrated that even in defeat, Islamic State’s ideology will endure.

Countering that ideology is the next great battle and arguably the more difficult one. Even the world’s leading experts of radical Islam can’t seem to agree on what is behind it and what makes it so appealing.  The physical battle, on the other hand, is relatively straightforward: Islamic State has placed itself in an impossible military scenario, surrounded on all sides by enemies and reliant on a depleting stock of foreign fighters for recruits. Raqqa will fall, eventually. So will Mosul, the ISIS stronghold in Iraq where Canadian-trained Kurdish militiamen are manning the frontlines, supported by Canadian Special Forces. The demise of the “caliphate” will deal a serious blow to Islamic State’s credibility, considering it derived its authority from establishing a “caliphate” in the first place.

What it will not do is eliminate the root causes of radicalization that have produced tens of thousands of foreign fighters who have joined Islamic State’s ranks. It will not de-radicalize them, even as they attempt to return to their home countries, nor will it eliminate the poisonous socio-economic and political environments that are quickly turning Western democracies into breeding grounds for more radicals, Islamic or otherwise.

Equally worrying is the increasingly authoritarian turn the world is taking. The French have lived under a state of emergency since Nov. 13 last year, after a coordinated attack on soft targets in Paris killed 130. In addition to the thousands of soldiers deployed on France’s streets after the January 2015 attack on the offices of the satirical magazine Charlie Hebdo, the police were given extraordinary powers of search and detention. Hundreds of homes were raided and suspected terrorists arrested or placed under house arrest without any legal recourse. The emergency law was scheduled to sunset on July 26 but French President Francois Hollande announced hours after the Nice attack that it would be extended for another three months.

A similar state of fear has taken root in Turkey, which has been  under a de facto state of emergency for the past three years, following massive street demonstrations against the increasingly authoritarian leadership of president Recep Tayyip Erdogan. Police and anti-terrorism forces now dot virtually every major landmark in Istanbul, along with the water cannons and armoured personnel carriers that have become the symbol of Turkey’s burgeoning state repression. Laws have also been changed to broaden the definition of terrorist, leading to the arrest of thousands, including journalists.

The U.S., Bangladesh, and Pakistan—virtually every country where terrorism has struck has adopted an authoritarian posture reliant on countering terrorism with force. Still, the attacks continue, fuelled by radicalized individuals pushed to the margins of society who feel they have nothing to lose. There is no predicting the kinds of deranged, suicidal plots these lone wolves or small, independent terrorist cells will devise next. And if there is no way to predict them, there is no way to stop them, short of living under a Huxley-esque police state where everyone is a suspect. Even that is no guarantee.

Phil Gurski, an Ottawa consultant who spent three decades working for Canadian intelligence agencies, estimated that the threat of ISIS—and its inevitable successors—could last another 40 to 50 years. “The attacks in Paris [in 2015] may lead to an incredible international response that just decimates these [ISIS] sons of bitches, but the ideology will still be there—and that is the thing that’s worrisome,” he told Maclean’s last year.

So what can be done? Most experts agree, if not on the mechanics of radicalization, at least on the hard truth of its durability. Taking the steam out of the radical narrative will take years and require the kinds of reasonable debates that seem to have all but disappeared from the public discourse. Instead the world faces a rising cadre of populist leaders who advocate dystopian visions of a world deeply divided along ethnic and religious lines.

Sadly, that is exactly the world in which the idea of the Islamic State thrives. We may kill its body but in the process we have gifted its spirit all it needs to survive.