Passarlay survived human trafficking and a Mediterranean crossing. And he plans to go back home. 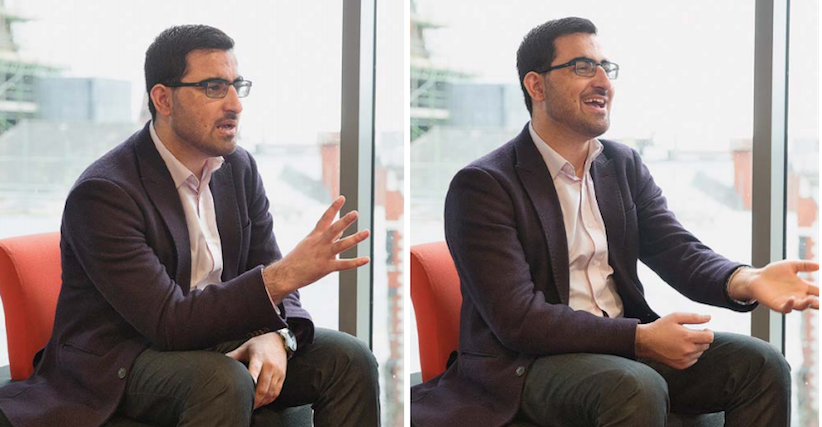 After American soldiers killed his father and grandfather and the Taliban pressured him to join them to take revenge, Gulwali Passarlay fled on a yearlong journey from Afghanistan to Britain. Only a boy, he was passed through a web of people-smugglers, was jailed, deported, abused and nearly drowned. He made it to Britain and is now a politics student at the University of Manchester and an advocate for refugees. He spoke to Maclean’s about his book The Lightless Sky: A Twelve-Year-Old Refugee’s Harrowing Escape From Afghanistan and his Extraordinary Journey Across Half the World.

Q: When your mother sent you and your brother Hazrat away from Afghanistan, she told you not to come back, no matter how bad things got. Why?

I’ve seen some pretty bad things in Afghanistan, some horrific and inhumane actions. But she saw more killing and more bloodshed than I have. And I think she understood the implication of us staying was we would most certainly be killed—either by the Americans or the Afghan government or the Taliban.

Q: Were there specific threats against you?

My uncle was involved in the Taliban. He was a commander and had been working with them for many years. Because of that, when the Taliban government collapsed, it was a problem for us. My family members, including my father and other relatives, were killed by American forces. The Taliban wanted my brother and me to join them, to take revenge—not only for my family members, but also to fight the invaders and occupiers, because Afghanistan has a proud history of not welcoming invaders and occupiers. It’s a religious duty, a so-called holy war. And even at 10 or 11, I was certainly drawn to that. Being a Pashtun, being an Afghan, revenge was part of my lifestyle. We were between a hard place and a rock. The Americans wanted us to work for them, to do intelligence gathering, and the Taliban wanted us to become fighters and threatened us with all means, including death. Either way, our lives were in danger.

Q: Did you have any sense of where you were going when your journey began?

I had no idea. All I knew was that I was heading somewhere safe. I had heard I was heading to Europe. I knew my brother and I I were going together. We were in the hands of strangers. And I was actually quite ashamed. I felt that this was the most dishonourable thing to do, to leave my mum, to leave the women in need. So I felt great shame in leaving. That’s one of the things that people in the West don’t get. They think refugees have a choice. Well, you don’t. You’re desperate.

Q: Very early in your journey, you lost your brother.

My mother said not to let go of each other’s hands. But as soon as we got to the airport in Peshawar, we were separated. So not only was I trying to get to safety, I was also trying to find him. Even if I wanted to go back to Afghanistan, which I would have done when I was deported from Turkey to Iran, how was I going to go back and tell my mum I don’t know where he is? So I had to find him.

Q: You describe a vast people-smuggling network stretching across Eurasia. How does it work?

It is incredibly sophisticated. The human smugglers, traffickers and agents are more effective than some states and governments. I would be in one city, and before I knew it, I would be in another city, and everything would be organized. It was truly amazing. I had the main agent in Kabul. He had country representatives. So he had somebody in Tehran looking over his business, the commodities that we were, in Iran, and he would pass us on to somebody in Turkey. You are passed along from one place to the other. Responsibility moves on, but you are still linked to the Kabul guy. The treatment from some agents was heartless. They would lie to us. Sometimes, if they have to kill you, if they have to let you die, they’ll let you die. But the incentive for them is to keep their reputations for being good at taking people to safety.

Q: Tell me about crossing the sea from Turkey to Greece.

The Mediterranean was the hardest part of my journey. I was really afraid of the sea, because I had never seen it. I was in a small boat made for 20 people, and there were 120 of us in there for three days without food or water—and before that I had been in the forest waiting for the boat to arrive, also without food or water. We were told we would arrive in Greece a!er four hours. A!er 50 hours, the boat broke down. If the police had not arrived, we would have sunk in the middle of the Mediterranean. One of the biggest thoughts I had in my head was that my mother will never know if I am dead or alive. Nobody will ever find my body in the depths of the sea. I was afraid of death, but I was afraid of the unknown and what would happen to my mother and family. At least [with a body] they will know my grave is somewhere.

Q: How did you feel when you saw the photo of the little boy, Alan Kurdi, dead on a Turkish beach? That could have been you.

The sad reality is that happens every day. Children wash up on those shores every day. It’s nothing new. But that one picture, there was some sort of extra solidarity and extra support. Then, a!er a period, people forget.

Q: Eventually you made it to Calais, France, where migrants gather before trying to cross the English Channel to Britain.

Q: With an agent’s help, you managed to smuggle yourself onto a transport truck hauling bananas and get to Britain.

I was taken to the immigration centre and was able to claim asylum. And for the next year or so, life became very hard. I went through hell. My age was disputed. My nationality was disputed, which was the biggest insult. There’s nothing worse than not being believed by the authorities and social services. I came to the conclusion that life was not worth living, even a!er going through all these things, even a!er finding my brother. I wanted to commit suicide. I was like, “What is the point of life if no one believes you? I crossed half the world for what? Am I not a human being?”

Q: How did you climb out of that hole?

I was very determined. I had a lot of help from friends, a lot of support from teachers. I continued to stay engaged and stay active. I tried to give back to society as soon as I had status and was able to stay here. I wanted to make a difference and help those who were less fortunate than me in their struggle.

Q: What do you say to those people in Europe and North America who are worried about the influx of refugees and what those refugees will do to their societies?

Firstly, I love the new Canadian Prime Minister and the way he has welcomed refugees. Canada’s reputation is changing in the world. I do understand why people are concerned, but my point is that people will not leave their families, their homes and their countries without extraordinary circumstances—they are fleeing wars and conflict, they are fleeing persecution. They should be welcomed. Refugees are people who will contribute to society. I can tell you that in the past five years or so, I have not wasted a day without giving back to society, because I have so much gratefulness to the British public and the British government for allowing me to stay here and have security and peace. We shouldn’t see refugees as a burden. We should see refugees as an investment. Those Syrians and Afghans who are educated—even those who are not educated— will do everything they can.

Q: You haven’t seen your mother since you left, but you talk to her on the phone. What’s that like?

I told her that I’ve written a book and that I’ve dedicated it to her, and she’s like, “Well, you have far too much time on your hands to write books.” It’s funny. At the same time, though, I talk about how she saved my life, but she lost me, too. I’m a completely different person. I feel like I’m a stranger. If I go back to my land, to my family, to my home, I wouldn’t really fit in.

Q: Have you thought about bringing her to Britain?

It’s a moral dilemma. The issue I have is: what about those families that can’t come to Europe? And I think my family is not more important than any other family. What if every refugee brings their mother and their family to the West? There will be nobody le!. Having them there is an incentive for me to go back and change things, to bring justice and freedom to my people and to ensure that nobody is forced to flee their homes.

Q: Do you regret leaving?