Grandparenting advice for Charles: 'Spoil them and enjoy it'

Wondering what kind of grandfather Charles will make? Look to his relationship with the Queen Mum 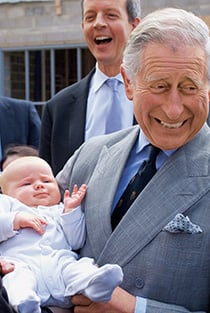 Out for a meet and greet in the Dorset town of Poundbury on May 3, Prince Charles found occasion to practise his newest royal duty, playing grandfather. Spotting 14-week-old Scarlett Coleman in the arms of her mother Amy, he asked if he might hold her. The hand-off was awkward, and his grip spoke of a man almost three decades removed from the birth of his own sons. But the wide grin, at least, was bang on.

In interviews over the past few months, the Prince of Wales has spoken of his excitement over the arrival of his first grandchild. “I’m thrilled, marvellous. A very nice thought of grandfatherhood at my old age, if I may say so,” the 64-year-old said shortly after Catherine, the duchess of Cambridge, announced her pregnancy. And more recently, he’s started expressing his long-standing concerns about climate change and environmental degradation in a new, grandpa-centric fashion. “I don’t want to be confronted by my future grandchild and (have) them say: ‘Why didn’t you do something?’ It makes it even more obvious to try and make sure we leave them something that isn’t a total poisoned chalice.” During his annual summer tour of Wales, he even stopped in at a pub and asked a group of local grandmothers for their best advice. “Spoil them and enjoy it,” 74-year-old Eileen Joseph counselled.

What’s not yet clear is whether the future king of Britain’s well-known thirst to modernize the monarchy will now extend to matters like pushing the pram, changing nappies and babysitting when Will and Kate want a night out. The precedents are not promising. Charles has made no secret of his own unhappy childhood, telling his biographer Jonathan Dimbleby of his distant mother and father, harrowing years at a remote Scottish boarding school, and total lack of choice. It was a sizable committee—which included his father, the prime minister, the chief of defence staff and the archbishop of Canterbury—that plotted out his stint at university and subsequent military service, for example. And while a better balance was struck with William and Harry—mostly at the insistence of their late mother, Diana—they too grew up mostly out of their parents’ sight, eating, sleeping and playing in top-floor nurseries and crawling into their nanny’s bed for morning hugs.

But the strongest predictor of what sort of grandfather Charles will make might be the close relationship he enjoyed with his own grandmother, the Queen Mum. When she died in 2002, at the age of 101, Charles paid a moving tribute to her “irresistible mischievousness of spirit” and the “sparkling wonderful letters” she wrote to cheer him up at school. “Oh, how I shall miss her laugh and wonderful wisdom. Ever since I was a child, I adored her,” he said. “She was quite simply the most magical grandmother you could possibly have.” (Charles’s other grandparents had little, or no, presence in his life. George VI died when he was three, while Philip’s father, Prince Andrew of Greece, passed away before he was born. Philip’s mother, the former Princess Alice, a congenitally deaf chain-smoker who founded her own religious order, spent most of her time in Athens.)

Of course, as with most things in Charles’s life, his wife Camilla, the duchess of Cornwall, will have a large influence. Since marrying the Prince eight years ago, she has gone from a barely acknowledged presence to front and centre member of the royal family, taking on more and more duties and appearing frequently at the side of Queen Elizabeth II. Camilla has helped Kate, another outsider, navigate the treacherous waters of palace life, and the pair have formed a strong bond. Already a grandmother to five under the age of five—two girls and three boys belonging to her son and daughter from her first marriage—she is known to be hands-on and happy to pitch in, although most of her grandma time happens at Raymill, the Wiltshire country home she obtained before marrying Charles. The Prince, it is said, is a bit of a neat freak and has a hard time coping with little ones at Highgrove, his country retreat.

As things are shaping up, the Waleses may have trouble booking a weekend with prince anyway. Will and Kate’s issue automatically becomes third in line to the throne, but the new parents seem determined to introduce the future king to the almost common life. After Will’s two weeks of paternity leave from his job piloting a RAF search-and-rescue helicopter ends, the plan was for Kate to spend some time with her parents, Mike and Carole Middleton, at their recently purchased $7.2-million Georgian manor house in Bucklebury, Berkshire. Close to the more modest home where Kate grew up, it will afford mother and son some private time to get acquainted in familiar surroundings. (The London home of the duke and duchess, a five-bedroom “apartment” at Kensington Palace with three reception rooms and a walled garden, is still under renovation.)

The “Mids,” as their friends call them, are the first non-titled grandparents of an heir to the throne in more than 500 years. But they certainly don’t lack influence. Already owners of a successful online party-supply business, they have seen their wealth and social stature grow exponentially since Kate first caught Will’s eye at St. Andrews University back in 2003. Carole, the family’s driving force, is exceptionally close to her three children—as much of a pal as a mother. (Mike is almost always described simply, and somewhat pointedly, as an “agreeable chap.”) And William, in turn, has become very tight with his in-laws, choosing to spend last Christmas at their house rather than with the other royals at Sandringham House, and reportedly calling them “Mom” and “Dad.” When Kate was hospitalized with acute morning sickness early in her pregnancy, it was Carole who kept a vigil at her bedside. She’s been pictured shopping for baby furniture—an expensive “Moses basket” from a chic Chelsea boutique—with her daughter.

The duke and duchess of Cambridge have lived simply since their splashy wedding, occupying a modest cottage on the Welsh Isle of Anglesey, employing only a part-time cleaner. They have yet to advertise for a nanny, leading to much speculation that Kate intends to care for the baby boy herself. The Daily Mail has already dubbed the 58-year-old brunette “the most powerful granny in Britain.” Tatler, the glossy magazine that chronicles the U.K.’s upper crust, has gone further, calling Carole “grandparent-in-chief.” The prince, they predict, will grow up “two parts Middleton to one part Windsor.”

All of which may not be that bad. Will and Harry didn’t see that much of their grandparents growing up as feuding between their parents kept them away from the Queen and Prince Philip (although those bonds have grown stronger since their mother’s 1997 death). Diana and her mother, Frances Shand Kydd, always had a strained relationship, and were not on speaking terms when the princess died in Paris. And her father, Earl Spencer, was in ill health long before his 1992 death, when William was nine and Harry, 7.

As they can attest, growing up royal is at once a very public, and singularly lonely experience. Prince George, on display and under scrutiny from birth, will need all the unconditional love he can get.