The powder keg that is Armenia versus Azerbaijan

Image of the Week: The conflict in Nagorno-Karabakh was a bomb waiting to go off. It's been that way for centuries. 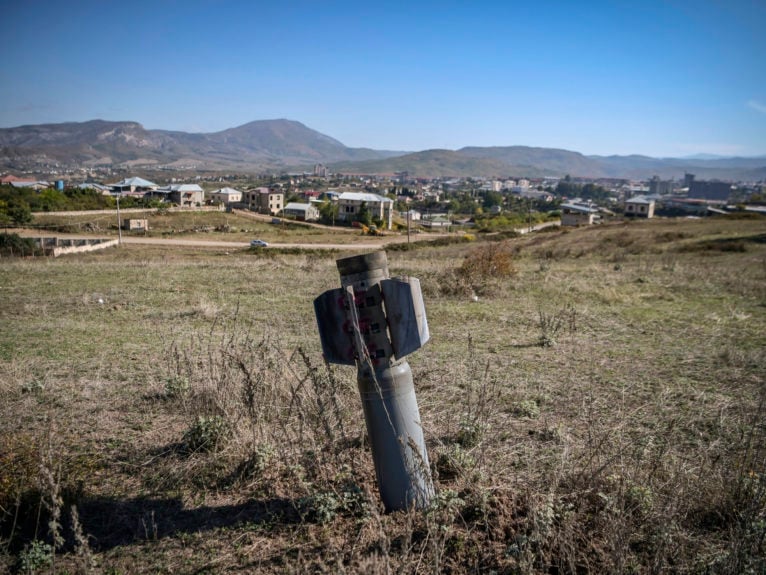 An unexploded BM-30 Smerch missile is seen on the outskirts of Stepanakert, during the ongoing military conflict between Armenia and Azerbaijan over the breakaway region of Nagorno-Karabakh. (Aris Messinis/AFP/Getty Images)

If you wanted to explain the current Azerbaijan-Armenia conflict, where would you begin? Would you start with the election held this spring by the self-declared (and internationally unrecognized) Armenian government in the Nagorno-Karabakh region of Azerbaijan? Or would you go back to Armenia’s Velvet Revolution of 2018, which brought in a new president who sat down with his Azerbaijani counterpart for the first time in years, briefly renewing hope—until he turned out to be as hard-nosed as his predecessor? Do you rewind to 1994, when an international ceasefire was required to stop the two countries’ years-long war and ethnic cleansing? Or even further to the fall of the Soviet Union, when Nagorno-Karabakh first declared independence—and no one listened? In conflicts like these, you can always “go back further,” pointing fingers at the other side, claiming they started it. And this one goes back centuries, Azerbaijan (backed by Turkey) versus Armenia (backed by Russia). Before that, Muslims versus Christians. By this point, as with so many ongoing conflicts, few people outside the region know or care how it started. Months of war follow years of peace. Like the unexploded missile sitting in a field of the largest city in Nagorno-Karabakh, the region is a powder keg. When it explodes, you don’t wonder why. You wonder why it didn’t happen sooner.