The MERS virus has killed at least 19, and is sparking fear and anger about the government's initially slow response 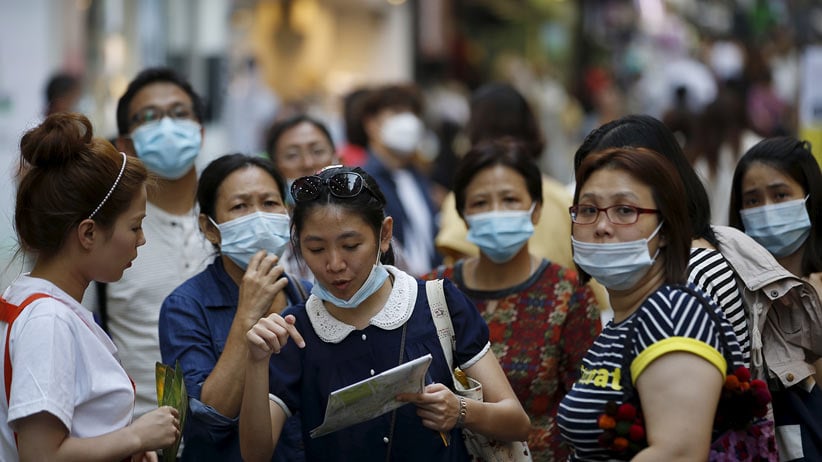 A tourist wearing a mask to prevent contracting Middle East Respiratory Syndrome (MERS) asks a sales assistant for directions as they tour Myeongdong shopping district in central Seoul, South Korea, June 12, 2015. South Korea has sealed off two hospitals that treated people with a deadly respiratory disease, officials said, even as the outbreak that has been spreading through health facilities could have peaked, with just four new cases on Friday. (Kim Hong-Ji/Reuters)

On an average day, Chungdam bon Pharmacy—located in Seoul’s glitzy Gangnam district—sells about 10 surgical face masks a day. This week, on any given day, they’re selling five times that amount. “We’ve been selling out,” says Noh Hye-rim, one of the pharmacists who works there. “People are buying them for prevention against MERS [Middle East Respiratory Syndrome.] They don’t know what it is exactly or what to do about it so they buy the masks.”

As of Tuesday, MERS has killed at least 19 people in South Korea, infected 150 more, and authorities have put more than 5,200 people in quarantine, making it the largest outbreak of the virus outside Saudi Arabia, where it originated in 2012. The first patient in South Korea, a 68-year-old man who visited the Middle East, was first diagnosed with MERS on May 20. It has since been spreading in hospitals, between patients, the family members visiting them and the health care workers treating them. Those at risk are largely located in the Seoul metropolitan area and the surrounding province.

Still, MERS has evoked mass fear and anger amplified by what many here view as the government’s weak initial response to the virus and veil of secrecy. The first South Korean patient had to go to four hospitals before health experts properly diagnosed him nine days later. The number of confirmed cases continued to rise. But, it was only last week when officials finally revealed the names and locations of all 24 hospitals affected. That was two and a half weeks after the first case was found.

Two South Korean hospitals are now temporarily closed and almost 440 schools and kindergartens remained closed as of this week in an attempt to curb the outbreak. Health care workers are tracking the cell phones of those under quarantine as well as making home visits and placing phone calls to monitor their locations.

South Korean Science Minister Choi Yanghee says that he believes the number of new cases has peaked and will start decreasing in the next few days. This is because the virus’ maximum two-week incubation period for those infected at a local hospital (regarded as the main source of the outbreak) ended late last week. Also, so-called “superspreaders”—patients with exceptionally high viral loads who can infect many people—have been identified, he says. But, there are a few other hospitals where additional cases were later discovered or MERS patients were treated. Their incubation periods are not yet over and could possibly be new sources of infections. MERS doesn’t have a vaccine or a cure and Choi wants to help fix that. “I believe it is very important for the global community and the researchers around the world to cooperate,” he says.

But Dr. Trish Perl, an epidemiologist at the John Hopkins Health System in Baltimore, is concerned that South Korea is not reaching out enough to the people who can help the most. “The WHO [World Health Organization] is the only independent group involved in the MERS case in South Korea and many of us don’t even know what their charge is,” she says. “Also, the WHO represents the public health community. It doesn’t represent the scientific community that can be leveraged to do the critical kinds of epidemiologic, pathophysiologic research that needs to be done.”

Perl says that she’s comforted by the fact that South Korea has strong research infrastructure, but there’s so much that we still don’t know about MERS, and past precedent has shown us the importance of scientists working together. She points to the 2003 Severe Acute Respiratory Syndrome (SARS) global outbreak that hit Toronto and Hong Kong particularly hard. In about a week, scientists at the Genome Sciences Centre in B.C. unraveled the genetic code of SARS— an exceptionally fast achievement. Shortly thereafter, the Centers for Disease Control and Prevention in Atlanta, Georgia, confirmed the results. With the complete gene sequence discovered, scientists were then able to look for drug treatments and possible vaccines.

“The whole SARS story was absolutely remarkable,” she says. “Information about the virus, in terms of scientific papers published, is probably four or five times what we can currently find about MERS when we compare the time past.”