The slow death of American freedom

The U.S. anthem no longer rings true. By many key measures, the 'land of the free' is badly falling behind the rest of the world. 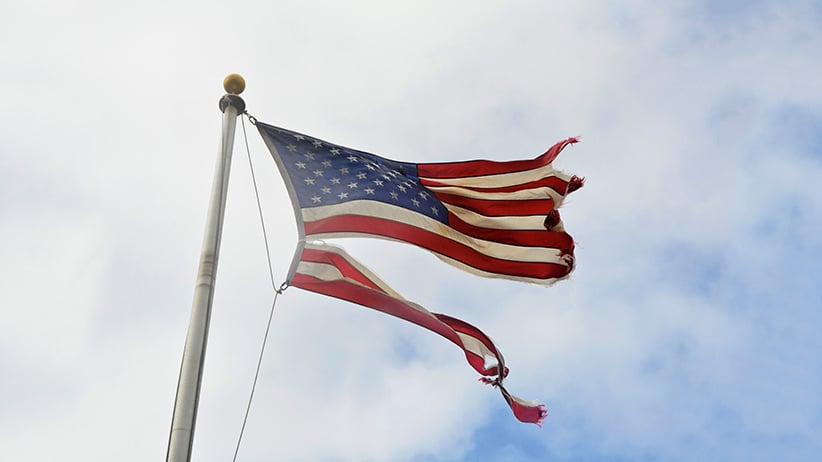 Francis Scott Key, the man who named the United States “the land of the free and the home of the brave”, owned six slaves. Granted, this was extremely common in the early 1800s. But Key, a public prosecutor, actually worked very hard to maintain slavery in America.

When a Quaker wrote in an abolitionist newspaper “There is neither mercy nor justice” for African Americans in Washington, Key indicted him for trying to “vilify the good name” of the ruling class. He argued that even a public discussion of abolishing slavery was “wickedness”. The “land of the free” was a gross exaggeration.

Nonetheless the phrase caught on. Throughout the last 200 years, Americans have viewed their homeland as a bastion of personal liberty. The Pilgrims, the Boston Tea Party, the Wild West, Wall Street—every thread in the national story is spun from tales of independence, of individual freedom and opportunity.

But, over the years, and quietly, America has fallen behind the rest of the world, and without even noticing, its citizens have become much less free in comparison.

The annual “Human Freedom Index”, a joint publication of the Fraser Institute, the Friedrich Naumann Foundation for Freedom and the Cato Institute, considers 79 different indicators of personal and economic freedom. These days the United States doesn’t even make the top 10. In fact, it trails countries like Poland and Finland.

This index gives the U.S. a particularly low score for the rule of law. This shouldn’t be a surprise. Americans are the second most imprisoned people in the world. They are five times more likely to find themselves in prison than a citizen of China or Canada. To put these numbers in context, the only other countries, which are remotely close to the U.S. rate of imprisonment, are all ruled by notorious dictators, including Turkmenistan and Rwanda.

And those dire numbers are nothing compared to the incarceration rates of African Americans. They are jailed five times more frequently than whites. And while levels of drug use are the same for both whites and blacks, the imprisonment rate for the latter is six times worse. Incredibly, as a result one in four African American men will end up in jail at some point in their lifetime.

MORE: Hamburg taught the world that the U.S. no longer matters

One of the most startling violations of individual liberty is the growing use of “civil forfeiture”. This is the official euphemism for the ability of police to legally seize money or assets from people they merely suspect of having committed a crime. No trial. No evidence. No guilty verdict. This is so widely used that the annual value of police seizures now exceeds everything stolen by criminals. In many states, this revenue is now paying for a sizeable portion of police budgets. Although it is increasingly seen as unconstitutional and several states have begun to repeal the practice, this week Attorney General Jeff Sessions signed an order actually encouraging law enforcement to seize private property more often.

The Human Freedom Index also gives the United States very low marks for “freedom of movement”. While the road trip remains an elemental part of the American Dream, foreign travel is considerably restricted. Last month President Donald Trump imposed new travel bans for Americans wanting to visit Cuba. This week North Korea was added. The list of countries off limits to American businesses is much longer.

In terms of broader economic freedom, the Heritage Foundation’s separate Index of Economic Freedom ranks the land of opportunity as only 17th globally. The annual report cites the growing amount of regulations and red tape faced by American entrepreneurs. The World Bank agrees. Its “Doing Business” report, an annual measurement of the barriers faced by businesses, ranks the United States 51st for the ease of starting a new business. (By comparison, Canada is listed as 2nd.)

MORE: The unstitching of the President

And, with a president who declared the media “the enemy of the people”, perhaps it is not surprising that Reporters Without Borders now ranks America 43rd in the world for press freedom. American journalists are not protected by laws to shield their sources. Intelligence agencies have increased surveillance of the media. And journalists are having their phones and laptops seized at the border.

In 1814, when Francis Scott Key wrote the Star Spangled Banner, perhaps (white) Americans enjoyed more freedom than anyone else on earth. But that is no longer true. The title “land of the free” has become a truism that has masked an ugly reality: the United States is now among the more restrictive countries in the western world. And with a new authoritarian president, this looks like it is only going to get worse. The anthem may need updating.