The Sunni vs. Shia schism, and why it matters 1,300 years later 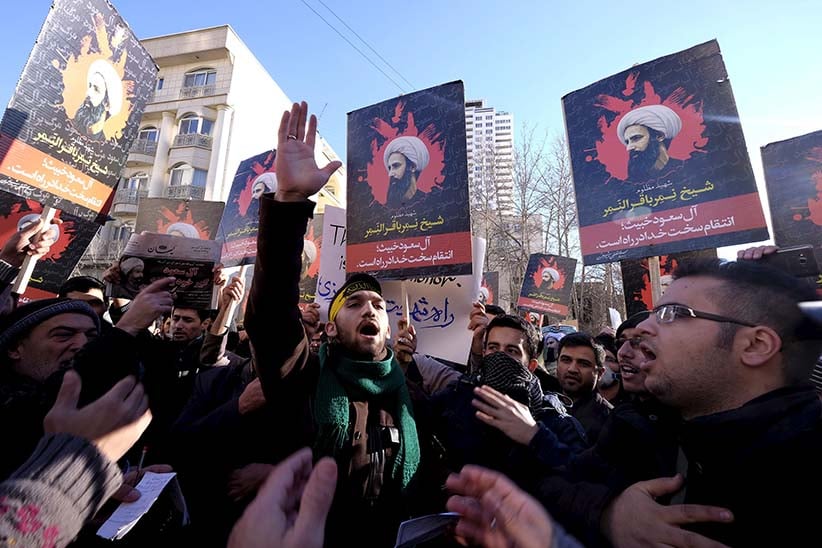 Sunni Muslims generally fold their arms across their chests while praying, while Shia Muslims tend to extend their arms, with palms resting on thighs. The latter is the sort of practice that can get you killed in ISIS-occupied areas of the Mideast. In a 2013 video, ISIS militants are shown stopping three Iraqi truck drivers and demanding to know if they were Sunni (like ISIS) or Shia. Although the drivers claimed to be Sunnis, they were tripped up when asked to show how they prayed: all three were shot dead. Nor is the murderousness one-sided: bombings, suicide or otherwise, have been common on both sides.

All of this was driving sectarian passions before Saudi Arabia, Sunni Islam’s leading power, executed a prominent cleric from its Shia minority, rapidly escalating tensions between it and Iran, the world’s preeminent Shia Muslim state, to a level that seemed just short of war. The antagonism sent journalists and puzzled readers back to the seventh century in a search for the origins of the split between Islam’s two main branches.

The schism is rooted, like many a civil war, in a dispute over succession and legitimacy. The minority who thought Ali, the Prophet Muhammad’s cousin and son-in-law, should lead the new religion after Muhammad’s death lost out. They eventually became the minority Shi’a Ali (the followers of Ali), a term soon contracted to Shia. The majority of Muslims, who followed other caliphs through the centuries, are called Sunnis, from their adherence to the sunna, the customary path. Despite long periods of (relatively) peaceful co-existence, the two traditions have often been at daggers-drawn. Perhaps never more than now.

Related: Why the execution of a Saudi cleric had plenty to do with America

Cast in religious and historical terms, it’s hard to imagine a situation for contemporary Westerners simultaneously more terrifying, more bewildering and more contemptible—people still inflamed with medieval passions but now armed with modern weapons slaughtering one another and a host of bystanders (read: us). That’s also a misleading evaluation of the rift and one that obscures the fact that contemporary Westerners are not nearly so different as we prefer to believe. 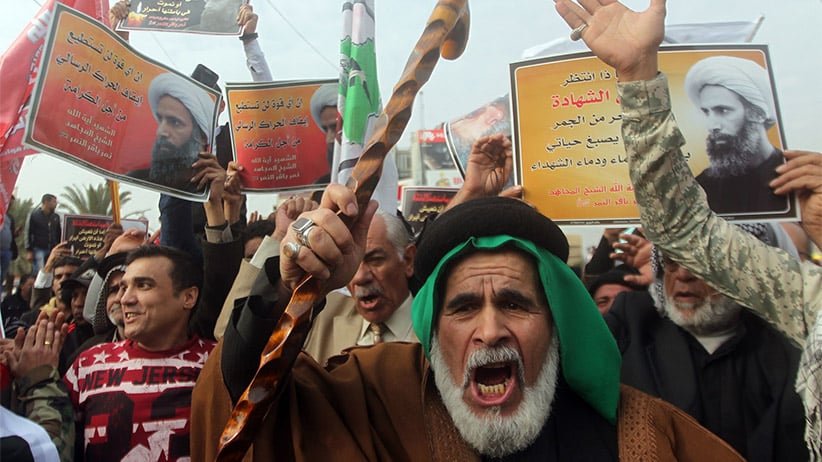 The post-religious West—as it likes to think of itself—understands ethnic conflict. Nationalism has long topped religion as a tribal marker in what was once Christendom. And it still bubbles up in places like Canada, where periodic English-French tension seems ridiculous to foreigners, and the United States, with its eternal and often violent racial politics. Indeed, proof of patriotic loyalty over religious adherence is how national minorities throughout the past few centuries gained acceptance as full members of their communities—consider the willingness of British Catholics to shoot French or Spanish Catholics in various international wars. Even as cut-and-dried national identity began to weaken in the ideological wars of the 20th century, when Westerners began to celebrate—among their enemies, at least—an abandonment of patriotism for higher ideals, such as displayed by anti-Nazi Germans, we always assumed both motives were fused in our cause. In the Anglosphere, the Second World War was fought for country and for human rights—as the comic book motto goes, “truth, justice and the American way.”

Western tribal markers, whether skin tone or linguistic, have been secular for so long the ethnic has become normative—deplorable but comprehensible. We recognize ethnic group violence when we see it, and we tend to look past the markers—they came from X and we come from Y—to root causes, such as X’s historic and ongoing repression of Y. During the 1970s and 80s, as the IRA, the self-declared embodiment of Roman Catholics in Northern Ireland, set off waves of bombings and exchanged assassinations with Loyalist Protestant paramilitaries, did anyone really think the violence arose from a dispute over the nature of Pauline grace? The American anti-Catholic fervour that sank one presidential candidate in the 1920s (Al Smith) and almost torpedoed JFK in 1960, swirled around fears a Catholic president would take orders from the Pope. And two millennia of Christian anti-Semitism has roots very like the Sunni-Shia split: questions of legitimacy disguised as religious arcana. Whose Holy Book is the Old Testament anyway?

Yet we seem happy enough to make religion-only assumptions in the Mideast. The sense of martyrdom that still marks Shia Islam does have real historical roots, in the massacre by Sunni forces of the last Shia claimant to the caliphate in 680, along with most of his family. But it also has real, continuing reasons. Sunni oppression didn’t stop at one act of brutality 1300 years ago; Sunni caliphs—who worried over a sizeable chunk of their subjects denying their legitimacy, in the same way Catholic and Protestant monarchs worried in 16th-century Europe—kept up the persecution. They also tightly bound Sunnism and ruling-class Arab identity, even as Islam spread across the world, bringing hundreds of millions of non-Arabs into the fold; even so, today in the Mideast the proportion of non-Arabs among Shias—most notably 70 million Iranians—is far higher than the proportion of non-Arabs among Sunnis. 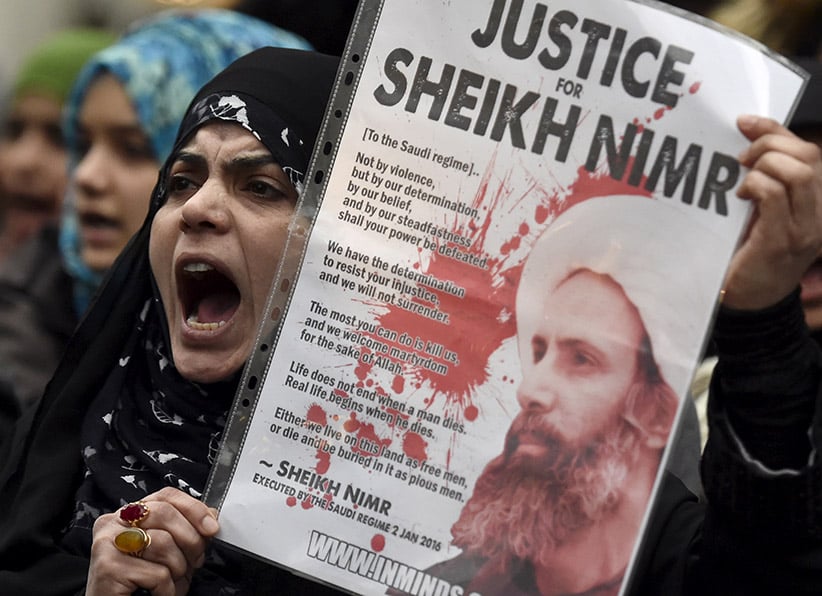 A protester holds a placard during a demonstration against the execution of Shi’ite cleric Sheikh Nimr al-Nimr in Saudi Arabia, outside the Saudi Arabian Embassy in London, Britain, January 3, 2016. (Toby Melville/Reuters)

Sunnis have always dominated Islamic rule in the Mideast, almost exclusively until the 16th-century rise of the Safavid dynasty in Iran, who made Shia Islam their state religion. That essentially set the boundaries and distribution of Muslims that marks the region today. Shias are the majority in Iran, Iraq, Azerbaijan, and Bahrain, and the largest religious group in Lebanon, while Sunnis—85 per cent of the world’s Muslims—form the majority in a 40-nation arc from Morocco to Indonesia.

Since 1979, theocratic Iran has proclaimed itself the true epitome of Islamic rule, as well as the champion of marginalized Shias everywhere, once again challenging the legitimacy of Sunni rule. The Sunni kingdom of Saudi Arabia, which also—given its rule of the holy cities of Mecca and Medina—claims to be the true pure Islamic state, has pushed back ever since, and far more aggressively since its new king, Salman, came to the throne less than a year ago. Ayatollah Ruhollah Khomeini and his Iranian successors have supported Shia or Shia-sympathetic groups across the Mideast. Saudi Arabia has stepped up its financial and military support for Sunni-minority rulers in heavily Shia nations, notably in Bahrain and Yemen. In Syria, where the situation is the mirror opposite—Syria is a Sunni majority country, but Alawite dictator Bashar al-Assad comes from a minority Shia sect—the Saudis seek the government’s overthrow while the Iranians support it. At home, Saudi Arabia has been tightening the screws on its large (10 per cent) Shia minority. The executions in Saudi Arabia—like its involvement in Yemen’s civil war—are a sign the kingdom is again scaling up its response to Iran.

Outside intervention—a full century’s worth, capped by the disastrous 2003 American destruction of Iraq—has only contributed to the profound failure of politics in a region marked by weak state legitimacy. And what always accompanies such a situation has flourished: murderous nihilism—ISIS fanatics, who claim true legitimacy over all Muslims, are hated by both Shia and Sunni powers—and a retreat to tribal loyalty. The conflict is coloured by religious identity, which in many of the failed states involved is the only identity available. But its roots lie in power politics.