The uprising in Iran: 'These people have nothing to lose. They’re fearless now.'

Terry Glavin: The protests sweeping across Iran are different than those before it, says the human rights activist Masih Alinejad. This time, the government is scared. 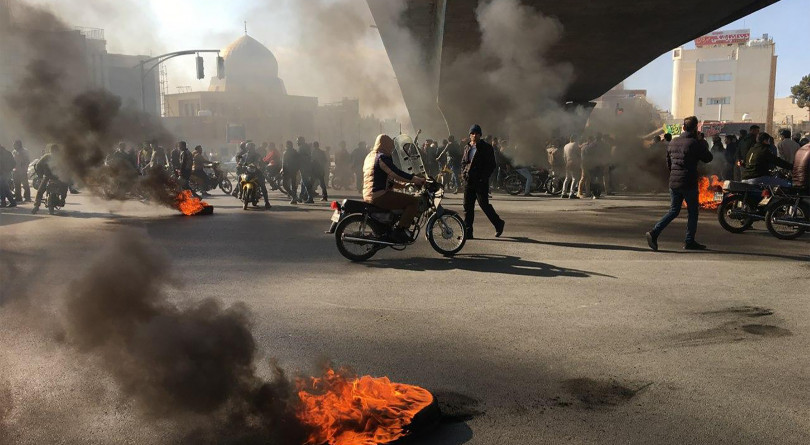 Iranian protesters gather in the central city of Isfahan on Nov. 16, 2019 (AFP/Getty Images)

The protests began last Friday, and before the weekend was over, the Islamic Republic of Iran was in a state of insurrection. Major disturbances have been reported in more than 100 towns and cities across Iran, from Ardabil in the north, on the Caspian Sea, to Bandar Abbas in the south, on the Persian Gulf.

Officially, at least 12 people have been killed and 1,000 demonstrators have been arrested, but it’s impossible to know how deeply the uprising has taken hold. A regime-ordered internet shutdown has cut digital communications across Iran by roughly 95 per cent, according to the global internet monitoring agency Netblocks.

But Iranians with access to satellite communication have managed to transmit images and videos to human rights activists in the Iranian diaspora, and the crisis is clearly far deeper than the government is letting on. Across the country, government offices, police stations and a major oil depot have been burned down.  Independent reports indicate a death toll of at least 36 people. Government officials say more than 100 banks have been set ablaze, including the Central Bank of Iran in Tehran, the capital.

Sparked by a surprise announcement on Friday that the government was imposing drastic hikes in fuel prices, the focus of the protests quickly turned to demands for the overthrow of the Islamic regime itself. Shouting “death to the dictator,” hundreds of thousands of protesters have been streaming through the streets of Tehran and Mashad, Tabriz and Shiraz. Billboards and posters of Supreme Leader Ayatollah Ali Khamenei have been put to the torch.

“I’m getting first-hand information from people in the streets in different cities. They’re mostly young people, and they’re crying, but they’re full of hope. People are very angry,” the prominent women’s rights activist Masih Alinejad told me on Sunday. “These people have nothing to lose. They’re fearless now. It is the government that is full of fear.”

READ MORE: As protests deepen in Iraq, Canada is caught in the middle

A high-profile Iranian journalist, Alinejad was forced into exile 10 years ago. Alinejad’s “My Stealthy Freedoms” campaign against Iran’s compulsory hijab law, launched in 2014, has grown into a major protest movement. Begun as a Facebook page that invited Iranian women to post pictures and videos of themselves with their heads uncovered, the movement continues to grow, even though Tehran’s Revolutionary Court ruled in August that women who send Alinejad their pictures and videos face prison terms of up to 10 years.

Alinejad said that while it is impossible to predict what will become of the current uprising, the spontaneous eruption that began last Friday is more radical than the protest movements that preceded it.

The 2017-18 revolt that began in Mashad was slow to take off, and centred on reformist demands. The failed “Green Movement” of 2009 erupted when a dubious presidential vote resulted in the election of the now-sidelined Mahmoud Ahmedinejad. This time it’s different, because of how rapidly the protests spread across the country, Alinejad said, and because it’s not just about corruption and the cost of living, like the protests of two years ago.

Although the gas price hikes triggered the protests that began last Friday, the popular demands explicitly call for regime change. Unlike 2009, the current protests are leaderless and organic, and thus more difficult to decapitate. “People are angrier and getting angry faster. The regime is already using live bullets, firing into crowds.”

The current protests are more like the events that ousted the western-backed Shah Reza Pahlavi and brought the Khomeinists to power in 1979, Alinejad said.

Iranian Interior Minister Abdolreza Rahmani Fazli is warning that security forces will “act to restore calm” if the protests continue, but whatever happens in the short term, the regime’s prospects are dim. The International Monetary Fund reckons inflation could hit 40 per cent this coming year, and the newly re-imposed U.S. sanctions are beginning to bite. The Iranian economy shrank by nearly four per cent last year, and the IMF is forecasting a further contraction of six per cent over the next few months.

In the meantime, the Iranian people are being held hostage by the regime. “Hostage-taking is in the Iranian government’s DNA,” Alinejad said, noting that the Khomeinist theocracy began with a hostage-taking—the capture of 52 American diplomats and citizens in November, 1979. They were held captive until January, 1981. The regime persists in jailing Iranian dual citizens and holding them to political ransom, Alinejad pointed out.

This is when the conversation turned personal.

On Sept. 23, Khamenei’s Islamic Revolutionary Guards Corps showed up at the home of Alinejad’s brother, Ali. He was handcuffed blindfolded and taken away. Amnesty International calls Ali’s arrest a “despicable and cowardly” attempt to silence Alinejad and bring to an end her campaign against the compulsory hijab. Ali remains in Evin Prison.

“This is another hostage-taking,” Alinejad said. “They want to keep me silent. They want to shut down the movement I am leading. They want me to feel guilty about my brother being in prison, and it’s not easy to deal with this feeling. When I am sitting down to dinner with my family, I have this feeling like someone is squeezing in my heart.”

“This is how the government is mentally torturing me. They want me to suffer every minute of my life. And this is the mentality of the government. So I have two options. To feel guilty and stay silent, or fight back against this oppressive regime. To fight back is the choice I have made. They haven’t broken me. They want me to stop spreading the message of Iran. They cannot stop me from giving a voice to voiceless people.”