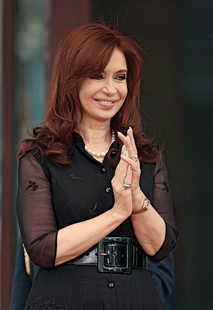 The recently widowed president wins re-election, and dedicates her next term to her late husband

Widowhood hasn’t been all bad for Cristina Fernandez de Kirchner. A year after the death of her husband, former Argentine president Néstor Kirchner, she harnessed his posthumous popularity to secure a landslide second presidential victory.

Kirchner, who was first elected president in 2007, was re-elected on Oct. 23 with more than 54 per cent of the vote, the widest margin of victory since democracy was restored to Argentina in 1983. The election denotes a stunning turnaround for the country’s first elected female president, who managed to parlay political protests and tumbling first-term ratings into overwhelming sympathy over the loss of her husband, who died of a heart attack on Oct. 27, 2010.

Dressed in black, Kirchner cried frequently throughout the campaign as she evoked the spectre of her husband, declaring her intention to continue his economic policies. Evidently, it worked: Kirchner’s six opponents trailed her by at least 35 percentage points. Néstor Kirchner, who served as Argentina’s president from 2003 to 2007, is widely credited with reducing unemployment and poverty after the country’s 2001 economic collapse. He announced in 2007 he would not seek re-election and would instead support his wife’s presidential bid, a power swap dubbed the “presidential marriage” by the Argentine press.

But his wife proved she could go it alone. The economy played an important role in her re-election, thanks in part to her unusual policies that helped shield Argentina from the global recession: heavy government spending on social programs and food and fuel subsidies, high commodity prices and high export taxes on agricultural products. Employment has reached record levels in South America’s second-largest economy, which is expected to grow by eight per cent this year.

But critics have also accused Kirchner’s government of cooking the books to convey a disingenuous economic outlook. Economists estimate inflation hovers around 25 per cent, the highest in the Americas after Venezuela, and more than double the 10 per cent reported by Argentina’s national statistics agency. Capital flight cost the Argentine economy $9.8 billion in the first half of 2011 and prompted the country’s central bank to sell $2.7 billion of reserves to steady the weakening peso, which has slumped 6.1 per cent. After her government raised taxes on soy exports in 2008, nasty protests halted production and Kirchner’s approval rating plummeted. Known to rule with a heavy hand, Kirchner’s government is also accused of silencing dissenting media.

But the criticism did little to quell Kirchner’s campaign, and she shows no signs of stopping. Just days after her win, she announced new policies aimed at curbing the flow of money out of Argentina, including requiring energy and mining companies to keep all future export revenues in the country and restrictions on foreign purchases of farmland. She also said that she will dedicate her second term to her husband’s memory. “Néstor will not die,” Kirchner eulogized. “If I tell you I am happy, I lie; if I tell you I am sad, I lie. I am not speaking as his widow but as his partner in militancy for the rest of my life.”