Trump Daily: Protests in the streets and Russian contacts

Maclean's Bulldog, Nov. 10, 2016: Day two in the era of Donald Trump begins with an awkward meeting and anger in the streets 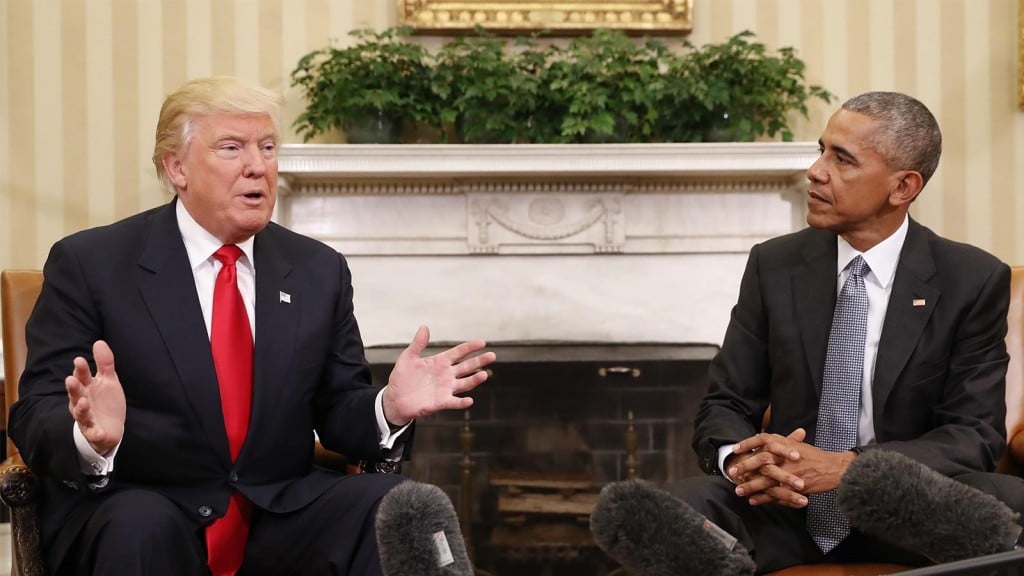 Nov. 10, 2016: Donald Trump and Barack Obama had the awkward meeting neither of them expected to have, while the president-elect was protested in U.S. cities, and Russia hinted at taking some credit for the election results. Plus, the U.S. Senate leader wasn’t wild about all of Trump’s ideas, at least the non-conservative ones.

Here’s our daily Trump Bulldog, rounding up what you need to know about what happened on this day as President-elect Donald Trump prepares for the White House, and vice versa.

Trump’s political career was launched with the “birther” movement, and by some accounts he decided to run for president after Obama made some jokes about him at a White House Correspondents’ dinner. And today they met as outgoing president and president-elect. After the meeting, the two men delivered some anodyne comments, with Obama calling himself “encouraged” by Trump “wanting to work with my team around many of the issues that the country faces,” while Trump declared: “we discussed a lot of different situations, some wonderful and some difficulties.”

Major cities throughout the U.S. saw protests against the new president. The protestors seen in places like New York City, Chicago, Los Angeles, and Denver were predominantly young, carrying signs with slogans like “not my president” and “Lincoln would be ashamed,” and there were also walkouts in high schools and colleges. It was another sign of the urban vs. rural, young vs. old split that defined this election, as well as the shock of discovering that much of the U.S. was less liberal than it seemed. “[He’s] not the leader of the America I live in,” one protester told the Guardian. “Or the America I thought I lived in.”

There was a lot of talk during the election about whether Vladimir Putin was taking an interest in the results. There is a lot more talk today now that Sergei Ryabkov, the Russian Deputy Foreign Minister, said “there were contacts” between Russian officials and people who worked for the Trump campaign. The Trump campaign immediately denied this. Another Russian official said that there had been some meetings between Russian diplomats and Trump campaign people, while Hillary Clinton’s team refused similar requests. Who thought we would see the day when the Democrats were more anti-Russia than the Republicans?

What will Donald Trump try to do in his first 100 days in office? That may be a less important question than what Senate majority leader Mitch McConnell will let him do. In a meeting with Trump and House Speaker Paul Ryan, where they discussed the agenda of a unified Republican government, McConnell “shot down or expressed little enthusiasm” for some of Trump’s ideas. With at least one of them, the idea of term limits for Congressional representatives, McConnell openly announced that he won’t be taking it up in the Senate. But he also seemed uninterested in Trump’s less conservative proposals, like infrastructure spending, which McConnell doesn’t consider a priority according to NPR. And he “declined to discuss the Senate’s immigration agenda further,” but is all-in on trying to repeal Obamacare. In other words, expect the Senate to pass the policies on which Trump is a normal business-class Republican, and ignore the rest.

Many people wrote about how to explain Trump to their children, but The West Wing creator Aaron Sorkin published his explanation in the form of an open letter in Vanity Fair, addressed to his 15 year-old daughter Roxy as well as her mother, Julia. He encouraged the “Sorkin girls” not to give up fighting, and warned them that Trump fans would like nothing better than to see them “sobbing and wailing and talking about moving to Canada. I won’t give them that and neither will you.” He also tried to cheer Roxy up by predicting that Trump can’t make it through a year in the White House “without committing an impeachable crime,” though he noted that his other predictions have been wrong so far.

Must-read: CBS News’s Will Rahn on how the press got the Trump story so wrong: “Journalists exist primarily in a world where people can get shouted down and disappear, which informs our attitudes toward all disagreement.”