His most abject apologists can see the truth: Trump has exposed a steadfast ally in the fight against ISIS to invasion and persecution 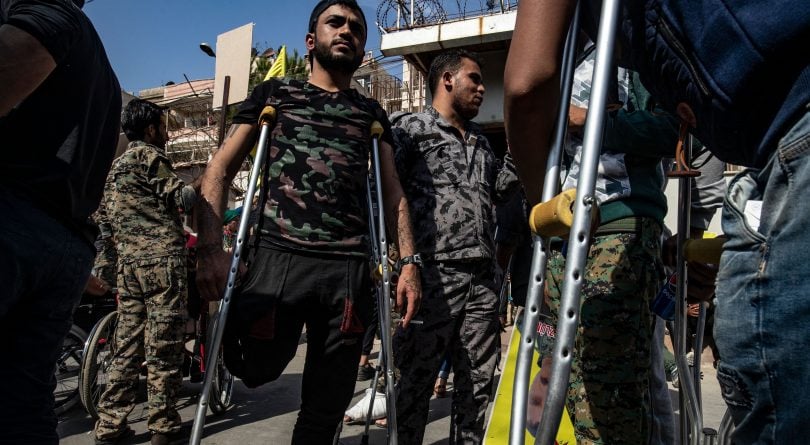 The maelstrom began with a shocking Sunday night communique from the White House: President Donald Trump had given Turkish strongman Recep Tayyip Erdogan a green light to launch a massive invasion of the Kurdish-held territories of northern Syria. U.S. special forces were ordered to pull back from the Turkish-Syrian border and let it happen. Their instructions: “We’re departing the field.”

It was an abject betrayal of the Kurdish-led Syrian Democratic Forces (SDF), the mixed Christian-Muslim force of Kurds, Turkmen, Assyrians and Arabs that has served as NATO’s primary and most effective anti-ISIS fighting force in Syria. Erdogan, who has been waging a vicious campaign of ethnic cleansing, mass arrests and political persecution aimed at Kurds in Turkey, is the SDF’s sworn enemy.

Warning of impending massacres and the displacement of hundreds of thousands of people, Kurdish leaders spent the day Monday mobilizing their forces in preparation for an attack. But before the day was over, Trump had reversed himself twice after facing fierce and immediate bipartisan condemnation in Congress.

RELATED: The world has turned on Syrian refugees

Trump’s Twitter feed gave every impression that he had become completely unhinged. At one point he referred to his “great and unmatched wisdom” in handling the situation, while chaos reigned at the State Department and the Pentagon. U.S. military commanders warned Ankara that whatever American blessing they thought they’d been given, any Turkish warplanes detected in Syrian airspace risked being blown out of the sky.

By this morning, whatever it was that transpired during the Sunday afternoon Trump-Erdogan telephone call that precipitated the episode remained a mystery. But it’s no mystery that Trump has been chafing to pull U.S. troops from Syria, no matter the consequences, ever since he was elected (his troops-out threat last year is what caused Defense Secretary James Mattis to resign) and Erdogan has been just as determined, all along, to roll back the Kurdish successes in Syria, no matter the death toll.

Meanwhile, the other leading NATO countries, including Canada, haven’t been exactly reliable and steadfast friends of the Kurds, either. Among the 10,000 ISIS fighters it has captured, the SDF is holding up to 2,000 foreign passport holders from countries that are unwilling to take responsibility for them, including as many as 32 Canadians—men, women and children. Both the Liberals and the Conservatives are content to leave them in the SDF’s custody.

In his various and contradictory utterances Monday, Trump complained about the NATO countries not taking responsibility for their ISIS fighters, but with Erdogan’s invasion the ISIS prisoners would become a Turkish problem. And if the Turks behaved badly, he could always “totally destroy and obliterate the Economy of Turkey,” he tweeted, adding that he was elected to get the U.S. out of “endless wars.” As for Syria’s agonies, “Turkey, Europe, Syria, Iran, Iraq, Russia and the Kurds will now have to figure the situation out.”

The Kurds are not exactly unfamiliar with American duplicity, specifically, or with the unreliability of the “West,” generally.

It wasn’t until the world’s conscience was shocked by the genocidal ISIS rampages against the Kurdish-minority Yazidis in 2014 that the Obama administration committed resources to defend and support the Iraqi-Kurdish peshmerga forces. It wasn’t until after the bloody ISIS siege of the Kurdish town of Kobane, on the Syria-Turkey border—while Turkish troops watched—that the NATO countries, with the exception of Turkey, fully committed resources to fight ISIS in Syria.

Stephen Harper’s Conservatives committed six CF-18 fighter bombers and about 200 Canadian Forces ground troops to the U.S.-led anti-ISIS coalition, with its focus in the semi-autonomous Iraqi Kurdistan region, but after Justin Trudeau’s Liberals took over in 2015, the CF-18s were pulled. Canadian Forces personnel stayed on in an advise-and-assist role, but after a 2017 Kurdish independence referendum and a retaliatory Iraqi military assault on Kurdistan’s peshmerga forces, Canada shifted its resources away from the Kurds to the Iraqi military.

A $10 million arms shipment intended for the Iraqi Kurds in 2016 remains in a Montreal military warehouse. Kurdish leaders have been pleading with Ottawa to resume Canada’s support, to no avail. The Canadian Forces’ Operation Impact maintains 850 troop-training personnel in Iraq, Kuwait, Qatar, Jordan, Lebanon, but none among the Iraqi Kurdish peshmerga.

Much to Erdogan’s dismay, the Syrian Kurds have managed to carve out a self-governing region called Rojava along Syria’s northern frontier with Turkey. It has been the only opposition-held Syrian territory that has been mostly at peace since Bashar Assad turned Syria into an abattoir in response to the Arab Spring in 2011. It was from that mayhem that ISIS emerged.

Rojava is ruled by the Peoples’ Protection Units—the YPG—which embraces a blend of democratic, feminist and anarcho-syndicalist ideology. It’s closely aligned with the Kurdish resistance in Turkey, the PKK—the Kurdish Workers’ Party. The YPG leads the Syrian Democratic Forces, and in Turkish law, all three groups—the PKK, the YPG and the SDF—are classified as terrorist groups.

But the YPG is the most disciplined, pro-western fighting force in Syria, and its SDF coalition lost more than 10,000 fighters in the U.S.-led war to defeat ISIS. The SDF more or less won that war last year. Now, Erdogan is anxious to make his move, and the Syrian Kurds are digging in for the fight of their lives.

A Turkish incursion into the Afrin area of Kurdish-held Syria two years ago resulted in the forced displacement of 150,000 people, and Turkish-backed militias committed a series of atrocities and well-documented abuses of civilians in the enclave. Now, Erdogan’s plans for the dismemberment of Rojava and a 32-kilometre-wide ”buffer zone” along Syria’s frontiers with Turkey include the resettlement of at least a million Syrian refugees in the area, stretching more than 300 kilometres from the Euphrates River to the Iraqi border.

On Saturday, Erdogan told delegates to the annual conference of his ruling Justice and Development Party that he was ready to carry out “a ground and air operation” into Syria, “maybe, today; maybe, tomorrow.” The White House account of Sunday’s Trump-Erdogan telephone call suggested the invasion was imminent, and that U.S. troops would stand down. Ankara’s account of the call made no mention of any imminent invasion, and suggested no decision would be made until after Erdogan visited Trump at the White House next month

RELATED: And how is Trump after an insane, surreal week? Couldn’t be better.

In the meantime, Trump is facing a possible impeachment owing to allegations that he attempted to strongarm Ukraine into coming up with dirt on Joe Biden, his primary Democratic Party challenger, and his manic behaviour over the past couple of days has left him as isolated as he’s ever been within the Republic Party. The condemnations came thick and fast all day Monday.

Utah Republican Senator Mitt Romney: “The President’s decision to abandon our Kurd allies in the face of an assault by Turkey is a betrayal. It says that America is an unreliable ally; it facilitates ISIS resurgence; and it presages another humanitarian disaster.” Rising Republican star and former U.S. ambassador to the United Nations Nikki Hailey: “We must always have the backs of our allies, if we expect them to have our back. The Kurds were instrumental in our successful fight against ISIS in Syria. Leaving them to die is a big mistake.”

Similar expressions of disgust and dismay were on hand from South Carolina Senator Lindsey Graham, Florida Senator Marco Rubio, Senate Majority Leader Mitch McConnell and others. Trump even got a tongue-lashing from the far-right televangelist Pat Robertson.

In the ever-narrowing circles of his political base, if Trump can’t even dredge up support from Pat Robertson, it might just mean that his time is almost up.