Washington warms up (a bit) to Trump

GOP members of Congress on Trump's 'impressive' appearance in the capital. 'There was no subject he didn't talk about!' 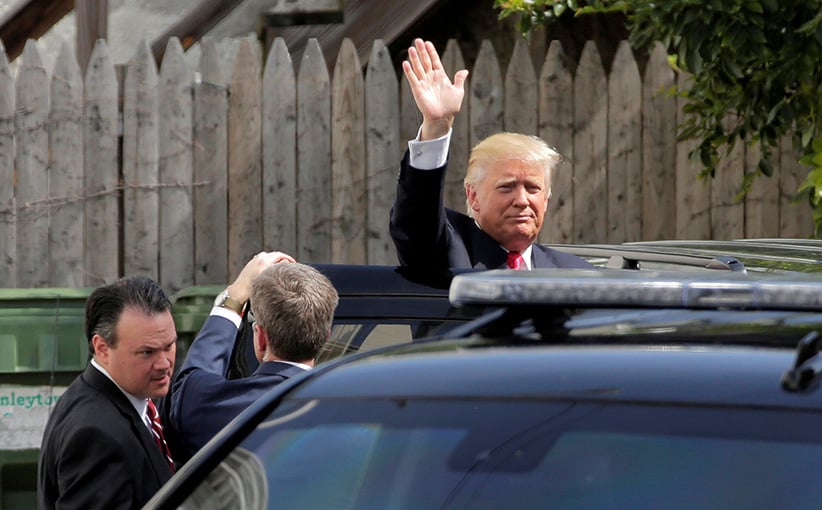 Dozens of Republican members of the United States Congress emerged gobsmacked and star-struck Thursday after meeting privately with their party’s putative presidential standard-bearer, praising Donald J. Trump for his erudition, composure, breadth of knowledge and attention to policy detail.

“He lights up the room, that’s a good way to put it,” uber-conservative Sen. James Inhofe of Oklahoma told Maclean’s after spending nearly an hour with the Donald, the first time the climate-change denier and same-sex marriage opponent had ever met the billionaire. “I was really most impressed, and really surprised how he addressed the issues, not like you see him on TV. There was no subject he didn’t talk about!”

“They’ve got a saying in the western hills of North Carolina,” echoed Thom Tillis, junior senator from the Tarheel State.”‘When you learn ’em, you like ’em.’ That really was the feeling inside the room.”

Despite Capitol Hill temperatures approaching 40° C, sunstroke was not a factor in the sudden pro-Trumpian enthusiasm; the separate meetings with senators and members of the House of Representatives were held in air-conditioned rooms.

Ivanka Trump, the Donald’s daughter, attended both sessions but did not speak; neither did her father address rumours that he plans to choose his own offspring as his vice-presidential running mate. Trump made no public comment while in Washington but tweeted, “The GOP has been great!”

While the House caucus reportedly gave Trump three standing ovations, the Senate confab was said to be less convivial, with the presumptive nominee directly challenging Sen. Ben Sasse over his vocal opposition to the Donald’s candidacy by alleging that the Nebraskan would prefer to see Clinton installed in the White House. Matters got even less comradely when, according to the Washington Post, Sen. Jeff Flake, identifying himself as “the other senator from Arizona — the one who didn’t get captured,” jumped on The Donald for his anti-Mexican, wall-building rhetoric. Trump responded by threatening to work against Flake’s bid for re-election, perhaps not knowing that the Arizonan’s seat is not at risk until 2018.

Conspicuous by their absences at the full-caucus powwows were Trump’s former rivals, Ted Cruz of Texas and Marco Rubio of Florida, the latter having told reporters earlier in the week that he needed no further introduction to the New Yorker who ruined his White House dreams. But the Politico newspaper reported that Cruz did meet privately with Trump on Thursday, furthering speculation of a public reconciliation at the Republican National Convention in Cleveland, two weeks from now.

About 40 of the 54 sitting Republican senators were present to listen to and question Trump. Seeking out the absentees, a Maclean’s reporter found former Republican standard-bearer John McCain dutifully chairing a hearing of the Senate foreign relations committee at the hour when he could have been harkening to the Donald, flanked by Kelly Ayotte of New Hampshire, whose precarious status in her bid for re-election has her maintaining as much distance between herself and Trump as possible.

Meanwhile, a knot of protesters quickly unravelled in the Amazonian heat, leaving only a handful of diehards chanting such moderate imprecations as “Small hands, bad plans” and “Donald Trump, go away—racist, sexist, anti-gay.”

“The Hispanics love me!” Trump reportedly told the House membership.

“Very impressive,” gushed Rep. John Fleming of Louisiana. “I saw people who maybe were skeptical before who now are convinced. His demeanour was very presidential.”

Thursday’s pilgrimage was Trump’s second trek up the Hill since the rest of the Republican primary field threw in the (monogrammed) towel in May. It came the morning after Trump exploded in indignation at a rally in Cincinnati against allegations of anti-Semitism, and at the same hour that a Republican-led House committee was charbroiling James Comey, the director of the Federal Bureau of Investigation, over Hillary Clinton’s classified email affair.

“There were a number of people you could just visibly see warming up and becoming very enthusiastic,” Jeff Sessions of Alabama, an early Trump-train rider, said after attending Trump’s parley with members of the Senate. “He states his views with clarity and force, and you want that. The guy’s got some charisma here. The guy is a force. There’s other people who can fill in the nuance. We’re not expecting him to write a 500-page bill.”

“Having been a former critic, I think that it’s fair to say that he expressed his views in a private setting in a way that allays a lot of my skepticism,” Rep. Franks of Phoenix observed, adding that the Donald seemed to comprehend the damage that some of his less temperate remarks had caused to his candidacy. “Experience is sometimes a brutal teacher.”

What no one on either side of the American political crevasse was disputing Thursday was the fact that, ultimately, the voters will decide between the former Secretary of State and her dubious truthiness and the (ex-) figurehead of the Miss Universe pageant, the Trump Shuttle and Trump U.

“Donald Trump wasn’t my first choice,” said Congressman Joe Wilson of South Carolina, the Republican backbencher who became famous in 2009 for blurting “You lie!” during Barack Obama’s State of the Union address. “But every time my enthusiasm meter starts to flicker, Hillary says something disgusting and the needle goes back up to maximum.”